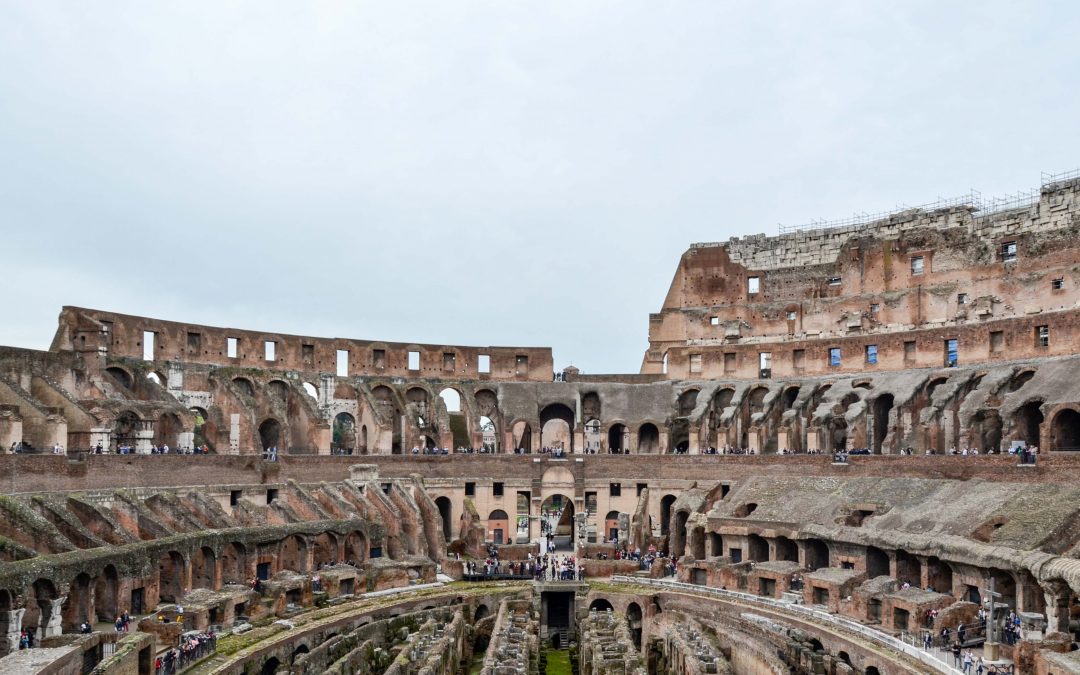 Directly after my week in Paris I flew to Rome for almost a week of <<between semesters’>> holidays before returning to classes in Florence. I also had some Erasmus friends here, with whom I stayed. Actually this script has only five days because I count the 1st day with my arrival, quite late at night.

On this first day as a tourist I asked my friends to be taken to Piazza Navona and its surroundings. They ended up showing me almost the whole city on the first day. We started at Piazza del Popolo, where there was one of the gates of the city, and we went down Via del Corso, one of the main and longest avenues of the city, entering all the churches that we found interesting (what in Rome is an exhaustive task, since there is a church at every corner).

We continued on to the long-awaited Pantheon, with its oculus in the ceiling. Unfortunately it was not raining, because I would love being inside with rain coming in.

We finally arrived at Piazza Navona, with its various fountains of Neptune and the rivers. Not so far away, in Campo dei Fiore, there was a little market with typical Italian products, like pastas of many different and weird shapes.

Finally “I felt” in Rome when I began to see some ruins, the Boarum Forum. We continue on foot to the Church of Santa Maria in Cosmedin, where the famous Bocca della Verità is found, a round stone with a sculptured face and a hole in the mouth where you have to tell the truth, or it will “bite” you – the line to do it was giant!

Finally we got to what my American Express guide considers the center of Rome: The Capitoline hill and the forums. Calm down, I did not visit them on this day, it would be impossible to see everything in one day :P. What we visited was the panoramic terrace of the Monument to Vittorio Emanuele II, from where you have a fantastic view of the various forums, the coliseum, the Vatican and the rest of the city.

On the way down we visited the church of Santa Maria in Aracoeli, just behind the monument, very beautiful, mainly because, from the outside, you can not imagine anything special.

Back to the ground we returned to Via del Corso until Piazza Colonna to go up Piazza di Spagna and take the metro home – Rome has metro, but as each excavation finds archaeological remains, the subway does not serve the city very well, which I did not like very much in the city.

After resting for a bit we went to Trastevere, one of the most beautiful and picturesque parts of the city, to have dinner, where I ate the best lasagna of my life! The restaurant is called Carlo Menta, go there! 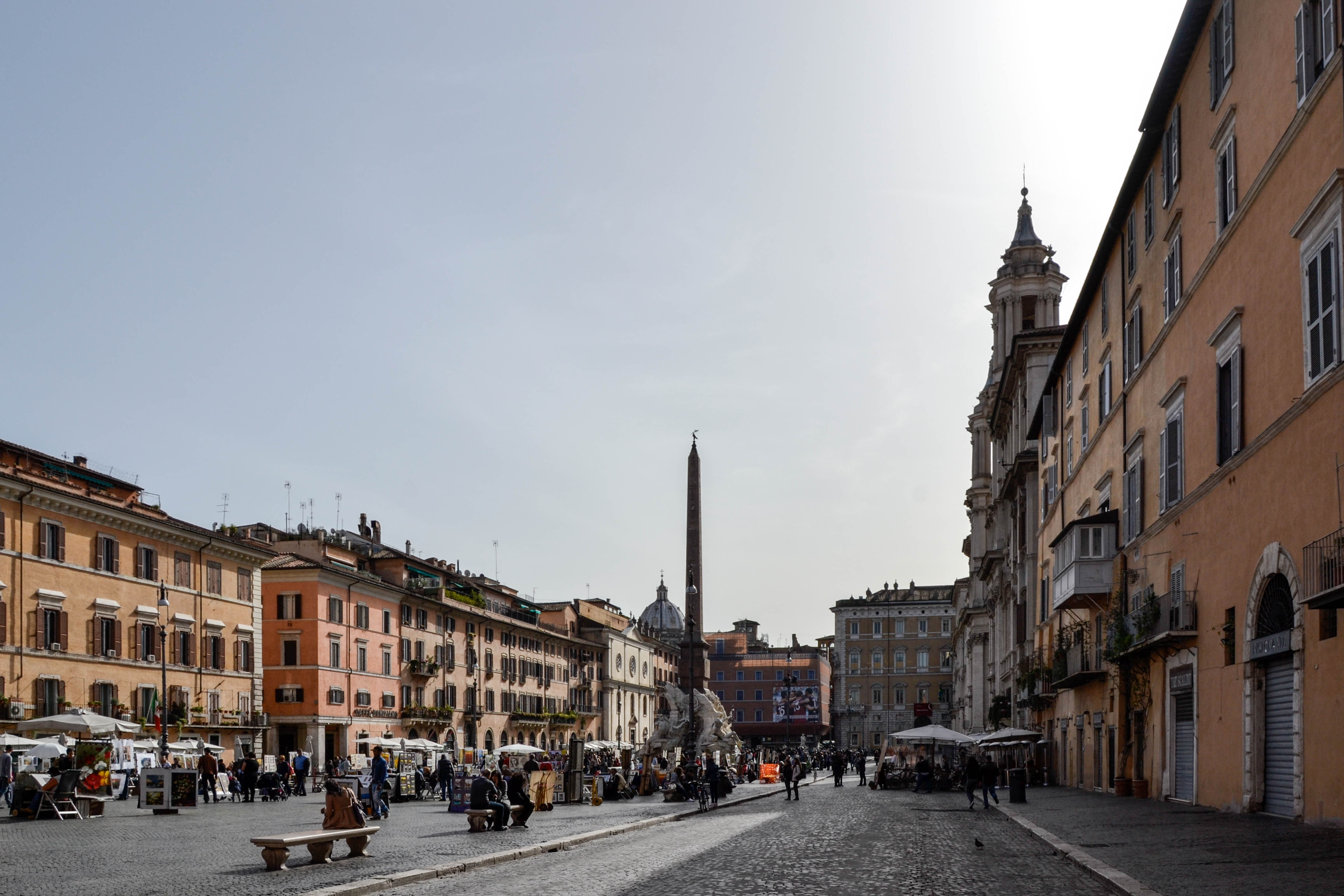 I started the day at the Forum. It is much bigger than I imagined and super impressesive! Everything we have ever learned in history classes can be checked here. I suggest you take a forum guide, to understand what your are seeing, because although there are many things well preserved, we are talking about ruins.

Then I went to the Colosseum, which also impressed me a lot because I only knew it from its exterior and it was super interesting to be inside and to imagine all the fights and events that happened in the arena, to see the “rooms” under the arena, from where the lions and other beasts would appear.

Then I continued along Via dei Fori Imperiali to see the other forums, which can not be visited, from above. I wanted to visit Trajan’s Forum this day, but I did not find the entrance and I visited it the next day. Obviously for practical reasons it makes more sense to visit in this day, since we are already in the area.

I left the ruins behind to go back to the Pantheon square to eat a Nutella crepe, so typical of that square, and meet my friend, who was finally free. On the way I visited two other churches, Santa Maria sopra Minerva, which has an obelisk on an elephant in its square and the church of Sant’Ignazio di Loyola, with its famous tromp-l’oeil ceiling.

We continued to Fontana di Trevi, where I had to trough the famous coin and enrich the Italian state. Because I was not tired enough (not!) we still went up the steps of Piazza di Spagna, we visited the church at the top, quite creepy, because there was a ceremony with people dressed in strange white robes, and we continued on to Villa Borghese to see the view from upstairs.

Note: do not forget that all architecture and art history students do not pay admission to almost every museum in Italy.

I started the day in one of the most important churches of Rome, that of San Giovanni in Laterano (actually considered the cathedral of Rome). After visiting the interior and exterior of the cathedral I passed by a small church called Santa Scala (scala means staircase in Italian), where the nave of the church is a staircase, which can only be “walked” on knees.

I continued my holy day in the Church of Santa Maria Maggiore, another important one. In fact the urban plan of the city of Rome was designed to connect these prominent churches.

On this day I found, then accidentally, the Market of Trajano. It is a very different building from the other forums, almost a still noticeable city, inside a building.

Then I continued to the Capitoline Museum, with its Campidoglio Square at its entrance. It is a classic art museum with many Roman sculptures and views to the Forum.

I also went to the church of Gesù, also with a beautiful ceiling and dome, that seems painted in three dimensions.

The next day I left Italy for some hours to visit the smallest state in the world, the Vatican City. Although I did not have to pay a ticket, I still spent some time queuing to enter the museum. If you have the opportunity, book it. The entrance has a beautiful ramp, of contemporary architecture, for me one of the highlights in the museum. The museum is huge, and in fact they call it Vatican Museums, as each building has a different style and hence several museums. You can found sculptures, frescoes, mosaics, a copy of the Pantheon and of course the Sistine Chapel, where one can not photograph, which was a disappointment because it was full of people, with the museum workers always shouting for people to be silent and not taking pictures, apart from “God and Adam” are just another fresco in the ceiling, do not have great prominence.

To complete the visit to the Vatican we went to St. Peter’s Basilica, where we did not see the Pope. This temple lives up to the fact that it is the seat of the Catholic Church, it is beautiful both outside and inside. We went up to the dome, a funny experience because as we go up we feel the slope of the walls. At the top we got a picture of the whole country!

Back to the ground we saw some elements of the Swiss Guard and also a mailbox from the Vatican Post.

Then we went running to the Castel San’t Angelo to watch the sunset from the top. We did not arrive in time to see the sun, but the view of the Tiber and the whole city was worth it during the twilight. 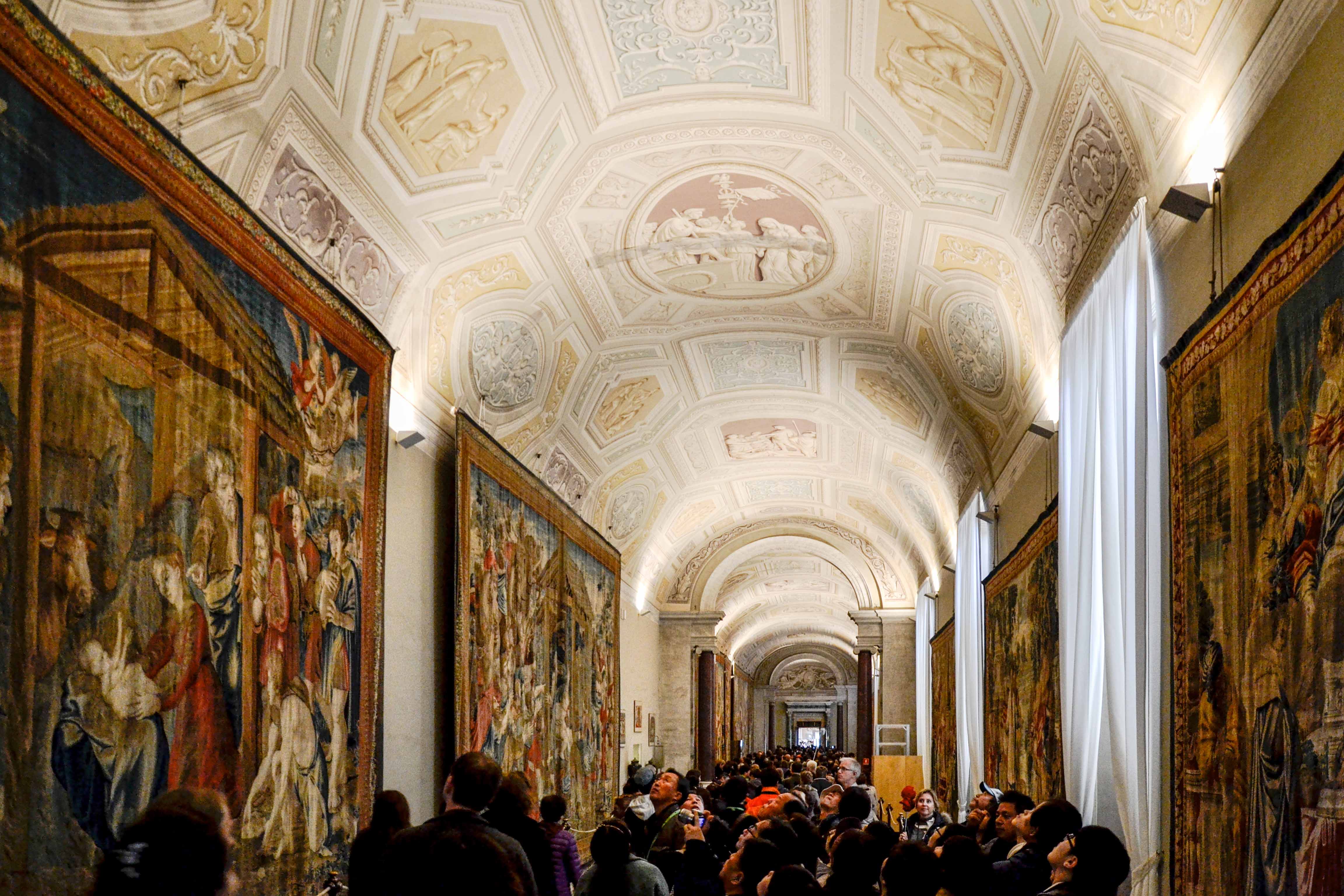 On the last day we visited the Thermae of Caracalla, more because my friends had never been there and wanted to draw these ruins.

Then we went back to Trastevere, one of my favorite parts of the city, as I mentioned. We went up the hill to the church of San Pietro in Montorio to visit its famous Tempietto, but unfortunately it was closed.

The last church visited in Rome was Santa Maria in Trastevere, all golden, beautiful, just like the square and the streets that surround it!

Then we took the bus to visit some contemporary architecture. We started at the MAXXI Museum of Modern Art, by the architect Zaha Hadid, and then the Auditorium of the Parco della Musica by the architect Renzo Piano.

The day culminated with the return to Florence by train. For those who do not have so much interest in contemporary architecture, can always return earlier. 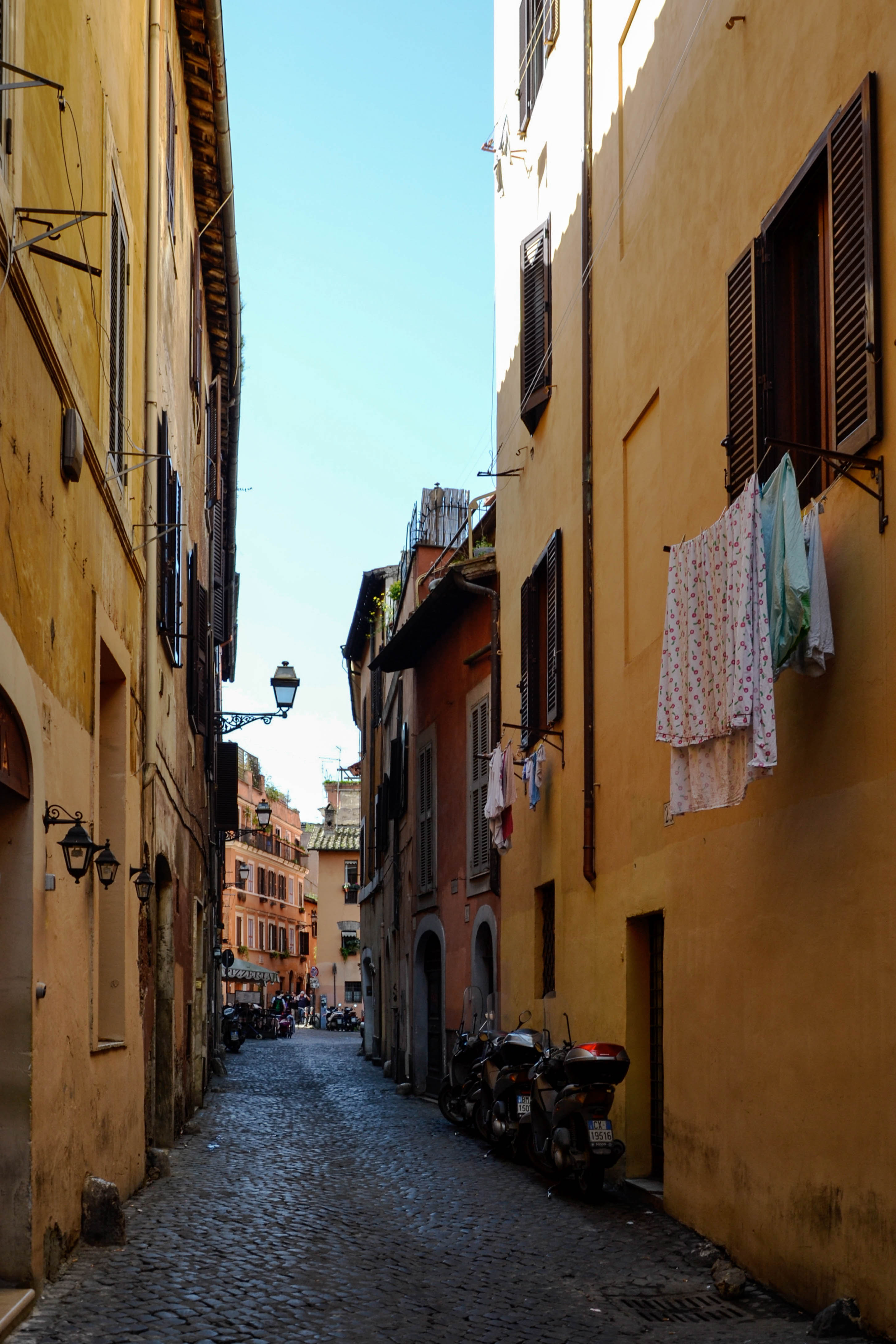 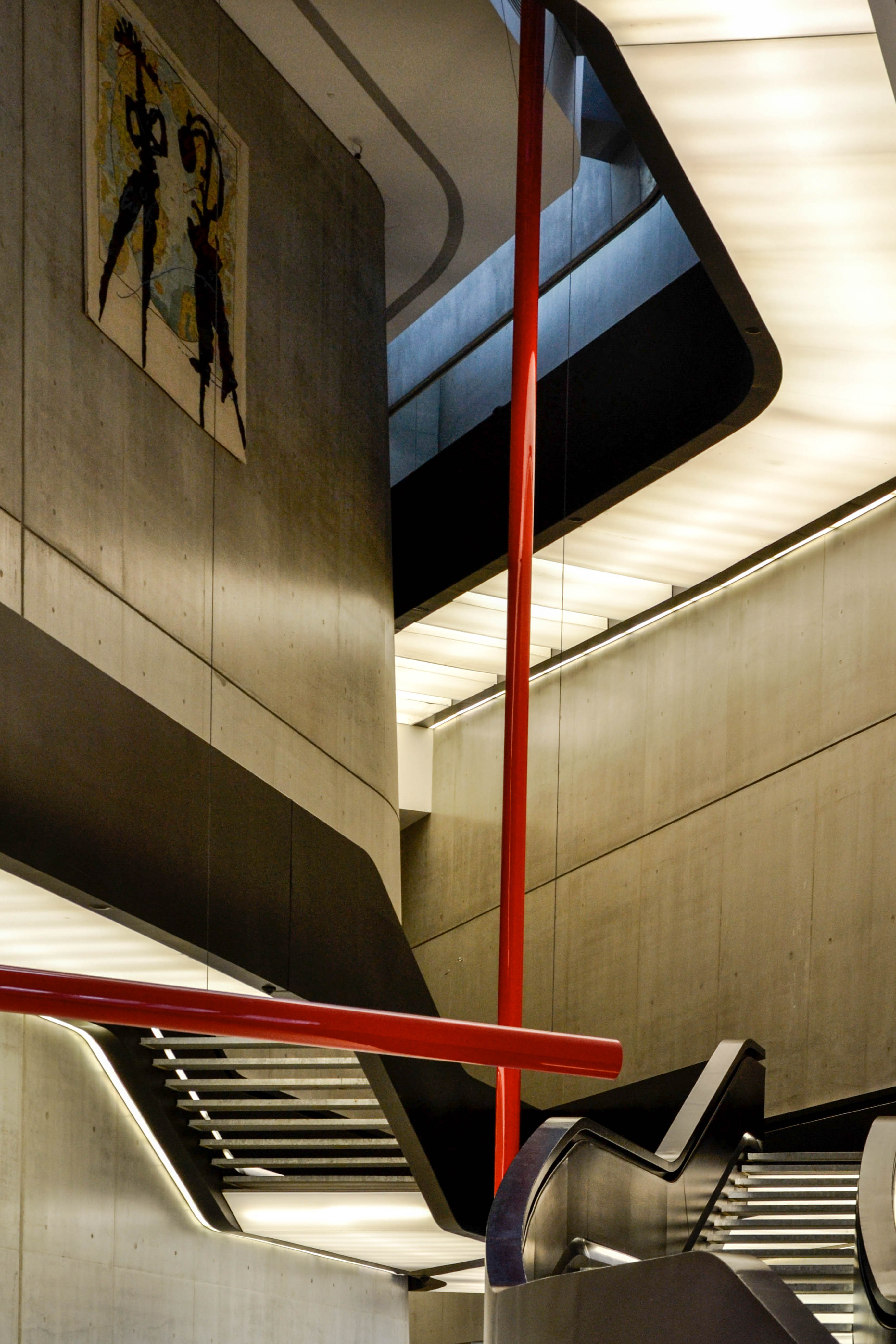 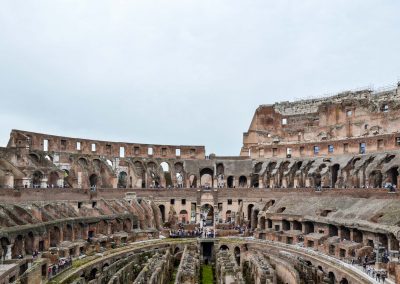