No, I’m not flying “long haul” yet. What is happening is that TAP is buying some Airbus A321LR (Long Range) airplanes, which are narrow body airplanes (single-aisle, usually used in middle-haul flights) but with a higher autonomy and so can fly further away, including crossing the Atlantic. So we in the “middle haul” now also fly to New York, Belém and Washington D.C. And I operated the first LR flight to the US capital!

One of the advantages of flying west is that jet lag plays on our advantage. Those photos that we would love to take at dawn to be just us and the monument but it gets really hard to get up early? Well, 6am for them are 11am for us! First impressions, right on the subway, was that Washingtonians are super friendly and straightforward – both telling us they love our lipstick, and cordially explaining that instead of squeezing by the door for them to go out, it would be easier for me to get out, let out and come back in. It is also a city full of immigrants: Spanish is heard everywhere, and the number of African Americans is also quite high; the lady who made me an omelette was from Bolivia and the owner of the mini-market at the bottom of the hotel street was Ethiopian and living in the United States for 9 years now. This city was a beautiful surprise!

So at 8am I arrived at the Lincoln Memorial. It was just me, the 16th president of the United States, and a few joggers – apparently the Memorial staircase is a highlight for exercising. You can’t imagine how happy I was at being there, looking at the Washington Monument obelisk reflected in the Lincoln Memorial Reflection Pool and the Capitol in the background!

Most of Washington’s monuments and landmarks are to be found around the National Mall, a large, wide avenue / park that links the Lincoln Memorial to the Capitol. But there are also several points of interest nearby that do not allow the route to be linear. So I visited the Korean War Memorial, the Martin Luther King Jr. Memorial and the Frank D. Roosevelt Memorial. With this diversion it was also possible to see the Tidal Basin (a kind of lake / canal) and the Potomac River, with the state of Virginia on the other bank. And back at the Mall is the World War II Memorial, this one really big!

I finally arrived at the Washington Monument (the first president of the United States, which the city owes its name), after having walked 6km. The grand obelisk was built between 1848 and 1885 and at the time was the largest man-made structure at 169.7m (4 years later it was surpassed by the Eiffel Tower). It took quite a few years to build because the American Civil War got in the middle and that’s why you can clearly see a distinction in the marble at about 45m high, which marks the interruption of the construction of the monument.

This is also where we have to decide whether to continue up the Mall through all the Smithsonian museums and end up at the Capitol, or up to the White House, through downtown to Union Station, the second most busy station in the country, passing through the little that remains from China Town (the Friendship Archway and the creative crosswalk – reference to the Chinese “horoscope”) and ending at the opposite side of the Capitol. I took the second option!

The White House can only be seen from afar and on one side – the north side where we could supposedly get closer to the house – is currently under fence refurbishment, so it is covered. Police everywhere, as expect, and from Trump the only presence we see is the dozen stalls with Chinese vendors selling President-related merchandising: “Trump 2020”, “2 thumbs up for 2 terms”, “KEEP America Great” “looool

Finally (and it wasn’t even 2 pm) I reached the Capitol Hill where the Supreme Court and the Library of Congress are also located. In the first one you can’t go in and I don’t think we can get any closer – there was a demonstration about the LGBT community’s labor rights and I wondered if the police barriers would always be there or just because of the event.

The Library is free and is a visit that I highly recommend, to me the most beautiful building I’ve visited in Washington! It also hosts temporary exhibitions – at this time one about the history of the American continent, the Fight for the Right to Female Suffrage in the US and another about the Thomas Jefferson’s, the third president of the United States, Library. You can also see the wonderful Reading Room from the top of a balcony.

Across the street is the large Capitol building, with its huge dome topped by a statue called “Liberty.” Visiting the Capitol is also free – like almost everything else in Washington, wonderful! – but you have to go with a guide and tours happen every 10min – which means that unfortunately there are always many people at the same time in each room. Most visitors are of course American and so the visit for us Europeans is a little less interesting because we lack most historical and political references. During the guided tour it is not possible to visit the Senate and House of Representatives chambers, each in a different wing of the building – to visit them it is necessary to request a special permission, explained during the visit. The Supreme Court and the Library of Congress were once inside the building as well, but as the country grew – at the end of the 18th century, when it was built, the country consisted of only 16 states – they had to increase all the spaces and that led these two rooms to independent buildings – there is an underground tunnel that connects the Capitol with the Library.

We then visited the Crypt – which was built to house President George Washington’s tomb, but as it was only completed several years after his death, his family did not allow them to relocate the body and only a marble star on the ground marks the point. This point is what divides the city into four quadrants and organizes the names of city streets, usually numbered and then organized by a cardinal point relative to the Capitol.

We obviously visited the Rotunda, the room below the grand dome, with several paintings featuring important scenes from US history such as the Declaration of Independence and also the National Statuary Hall, the room where the House of Representatives formerly met – from where many US presidents stand out, marked with a plaque on the floor where they used to sit – and which now houses part of the National Statuary Hall Collection, a collection of 100 statues – two from each state – representing prominent personalities from that state. I say part because the weight of the statues was such that structurally it would not be feasible to put them all in this room and were eventually scattered throughout the building.

We also visited the old room of the Supreme Court, formerly full of light, but with the expansion of the building became so closed that was eventually nicknamed  as “the dungeon”. 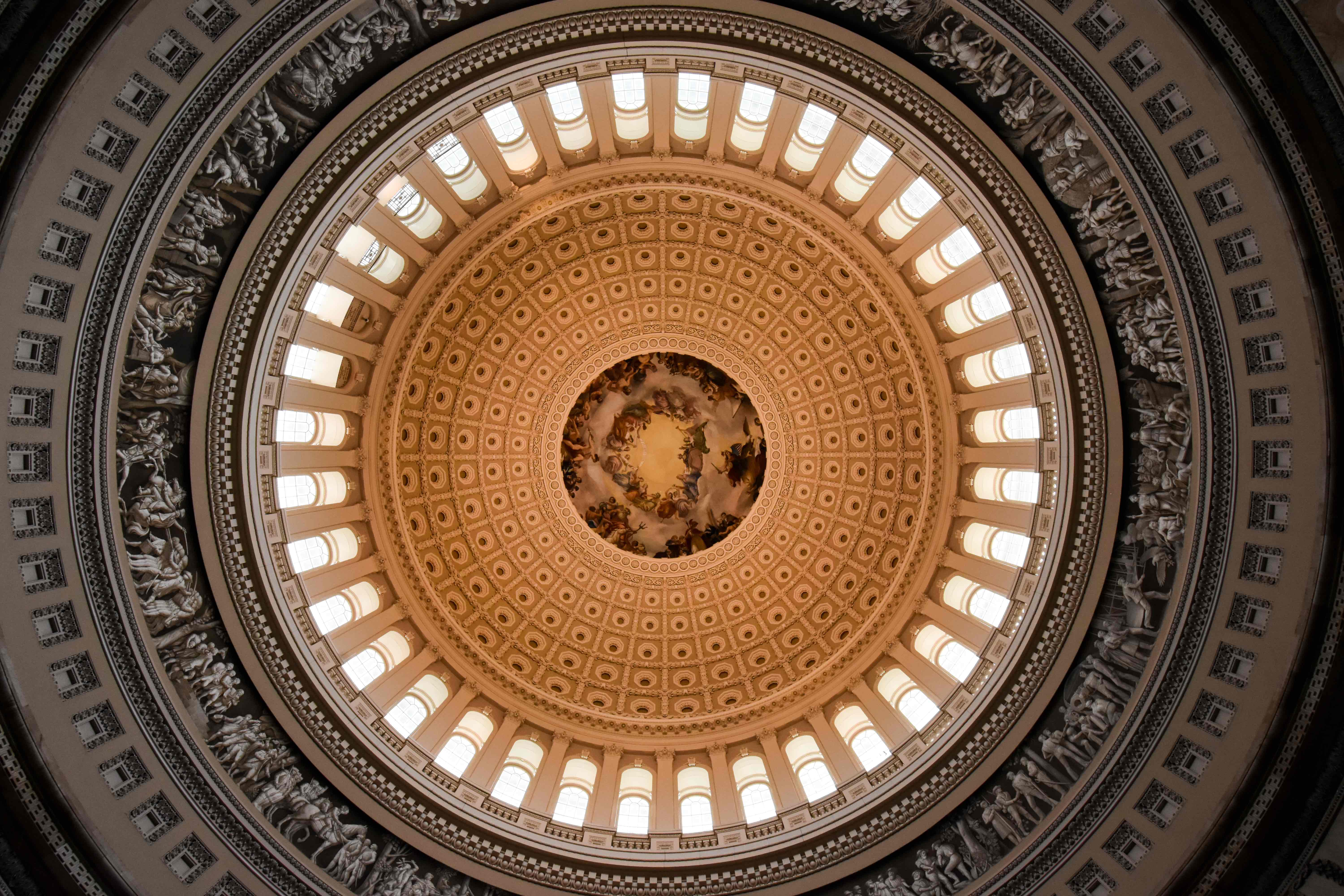 The day continued through the National Mall, a sort of round of recognition of the multiple Smithsonian museums, including visiting two of the museums the next day, which I will leave for an upcoming post.

I would also like to mention the number of squirrels in Washington! I have never seen so many squirrels in my life, sometimes four or five at a time! Also the ice cream vans with music we see in the movies that I didn’t get to see in New York, just like the yellow school buses! It was a great surprise this city, undoubtedly a must go that I didn’t know about!