This month was the month of flying to one country and then visiting another. First I flew to Copenhagen and went to Sweden to visit Lund and Malmö, now I flew to Helsinki for a two day layover to catch a ferry to Estonia and visit its beautiful capital Tallinn. I asked for this flight with my colleague and close friend Susana and we rented an Airbnb for one night in Tallinn so we could get the most out of the city – some colleagues come and go the same day!

The flight there is at night, we arrived at the hotel in Helsinki at 7am to have breakfast and then depart for the cruise terminal, where we had to be at 8:30 am, because the boat left half an hour later – the crossing takes between 2h-2h30, depending on schedules and lines. The weather was magnificent, warm, I even put sunscreen while we waited for the boat to depart. As soon as it started moving, the cold and the wind started, and I had to put on everything I had – taking a wind jacket was the right idea.

We were soon amazed at the departure from Helsinki and its archipelago with thousands of islands and islets, black, detached from the shining sea. When the islands were over we decided to take a nap for an hour so that we weren’t tired all day and soon woke up approaching Tallinn, also with some not so beautiful islands, but with a greater enthusiasm for arriving at our destination!

We then left Tallinn’s cruise terminal and headed towards the center. The first goal was to reach our airbnb’s offices, to verify if our apartment was ready before check-in time, so we could leave our luggage there. Along the way we soon began to realize that this walled city seemed to be stuck in time, everywhere indications of medieval architecture, as well as many people dressed up, either on guided tours or serving in restaurants. We reached the main square, where we would pass thousands of times, since our apartment was right next door, and where there was a fair with a stage where several people sang throughout the day.

We then left our things in the apartment and went to the tourist information office where they pointed out what was most worth visiting and told us about the multiple free tours that took place every day at several hours, a plan that seemed perfect for getting to know the city and its history. But first we had to have lunch and went to a medieval restaurant in the town hall building called III Drakoon, suggested by my father. We ordered a soup (like goulash), two ox sausages and two apple pies. Loved the soup and the rest of the food was also quite tasty. The sympathy of the lady who attended us was not great, part of the medieval theater, I guess.

As we still had a bit of time left before the free tour we decided to go to an alley that had been indicated by the girl of the information office, the very photogenic Katariina Käik. At the other end of the passage we found the city wall, which we discovered was possible to climb. In the various towers of the wall there were photographic exhibitions. The view did not live up to expectations as we thought we were going to be higher and able to see the rooftops of the Estonian capital.

We started the free tour, which lasted two hours. The first stopping point was at the back of St. Nicholas Church. We learned that Estonia is the most atheistic country in Europe and that this church was no longer a church. That area was bombed during World War II and the church was destroyed. The Estonians asked the Soviet Union for monetary help to rebuild it, but as the USSR did not want to participate in the reconstruction of religious temples, the city decided to make a Museum of Atheism. In the meantime the building suffers a fire and is again recovered but now as a Museum of Sacred Art.

We also learned that the Finns saved the city from total destruction. So in that bombing the church was destroyed, when the planes went back to refuel, they were destroyed by the Finns and could never finish the bombing of Tallinn. But the Finns did not save them because they were friends, but to avenge a bombing of Helsinki – which never really happened. The story goes that they were warned that there would be a night bombardment of the Finnish capital, so the clever ones turned off all the lights of the city and illuminated the forest just next to the city. So when the bombers arrived, they dropped the bombs where it was lit, thinking it was the city, and it was never destroyed.

We proceeded to the Independence War Victory Monument (which actually had to be obtained twice, once in 1918 after the Russian Revolution of ’17, and lasted until 1940, when it was again occupied by the Soviet Union, and again in 1992, after the fall of the Berlin Wall and the USSR in ’89 and subsequent restructuring of the Soviet countries), which is found in Freedom Square, a meeting place at important political moments.

Then we went up to the upper part of the city, where is the Cathedral of Alexander Nevsky, a Russian Orthodox cathedral, which, despite being one of the symbols of the city, for its architectural beauty, is an unimportant place for Estonians, mostly atheists, as stated. In front of the church is the Estonian Parliament, which is in the building of the old Toompea Castle, although hard to recognize from the front neoclassical façade, but only from the foothills on the other side. As we were doing the tour, we were unable to enter the cathedral, so we returned the next day.

From there we continued to two viewpoints of the upper city, to descend and finish the tour in the main square. We talked about the Estonian language and how difficult it is, the relationship with the Germans, Swedes and Danes, all former occupants of the region, the flag and its meaning, among other things.

Then we decided to rest a little before dinner, after all we had only slept about 4 hours in the last 36. Finally rested we went looking for a place to have dinner. Being Tallinn so small, we were almost able to get around the whole city until we finally chose a place. But during this search I got to photograph the whole city again, this time with the beautiful sunset golden light! 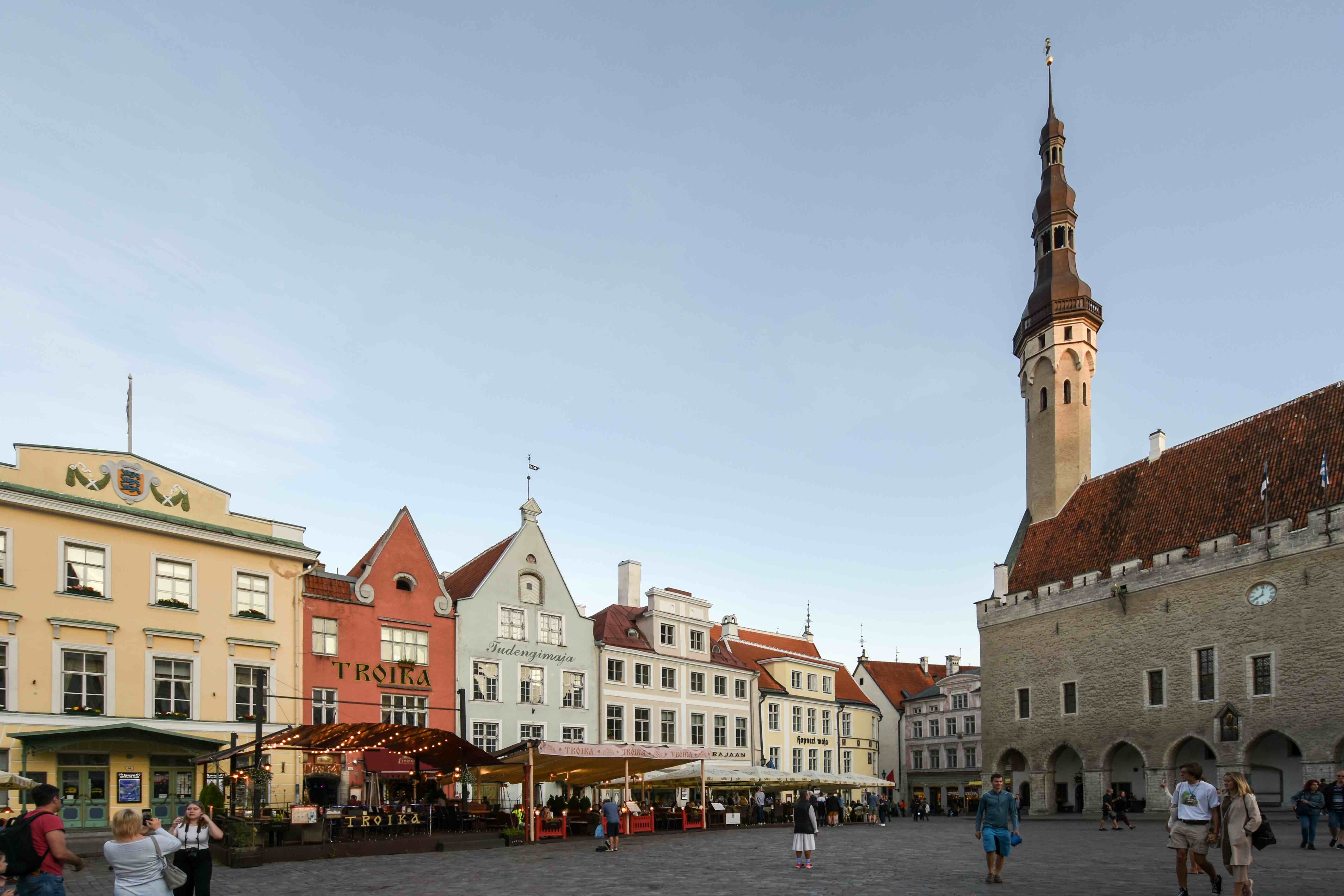 On the second day, after a good night’s sleep, we went back to the upper city to visit the interior of Alexander Nevsky Cathedral (whose photograph I have already placed next to the others of the cathedral). On the way there we found another viewpoint, next to another part of the wall, which could also be climbed and traversed.

We had to leave the apartment before noon, so we fetched our things and then took the tram (#1 or #3) to Kadriorg to visit its palace and gardens. This colorful palace was built by Peter the Great for his wife Catherine of Russia. Unfortunately, being Monday, the palace, which now houses an Art Museum, was closed.

So we grab something for lunch and had a picnic in the park while we waited for the ferry back to Helsinki. This time being awake the whole journey. Animals we saw none, just many ferryboats heading to the various capitals bordering the Baltic Sea. On arrival in Helsinki we saw the various islands and islets, now with sun facing them, which allowed us to see the various buildings on the islands, including some colorful huts that I thought were only to protect from cold or wind while people were on the beach, but that I later found out were saunas, to go straight into the cold water.

Tallinn is well worth visit and you see it very well in two days, I recommend it!