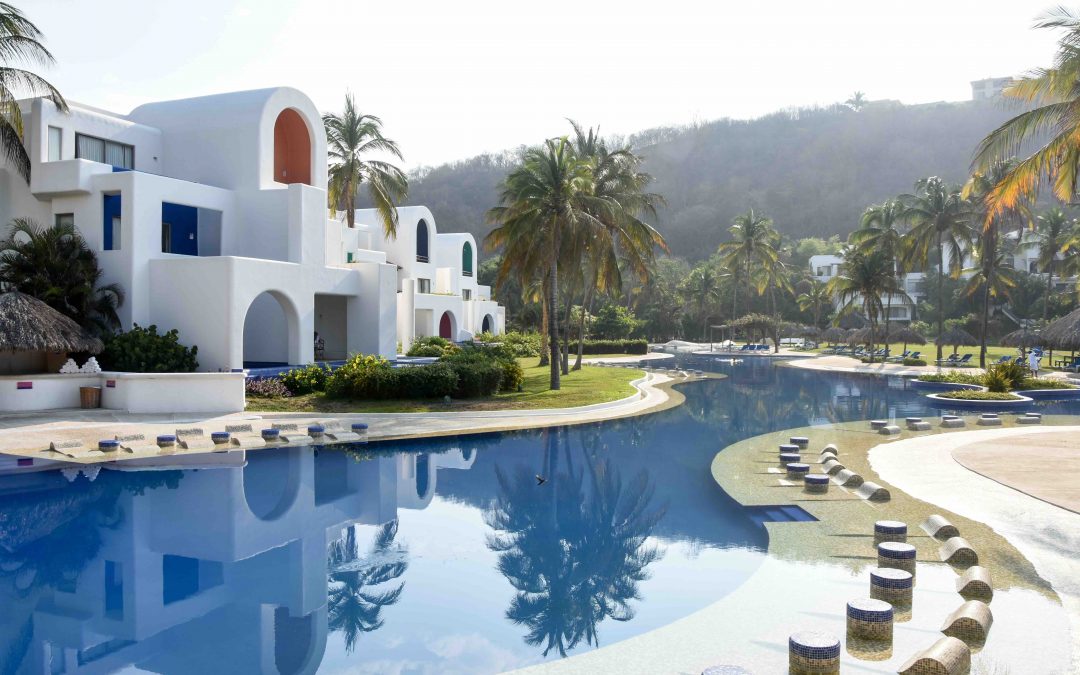 The last three days of this holidays in Mexico were spent in Huatulco. The state of Oaxaca has two main beach areas: Puerto Escondido, where I spent my birthday in 2015, more accessible to all, full of surfers, more relaxed; and Huatulco, where we find several all inclusive resorts, with private beaches and much more expensive. As we already knew the first, we decided to go to Huatulco.

The choice of the hotel was not easy, between comparisons of prices and photos, we opted for Hotel Camino Real Zaashila, which seemed to me more photogenic, with its buildings that made me remember the Algarve, Greece or an all white Arab city. The hotel was really beautiful and they even upgraded us to a room with a private pool, which we took advantage of, whether it was the first dive of the day, just after breakfast, or after sunset, until our fingers were all wrinkled. The food was also wonderful! I’ve gone for a three-day seafood diet: shrimp tacos, ceviche, octopus, all super tasty! The dinner restaurant was just above the beach and on the first night we even had fireworks!

From morning to night the birds were always present. From time to time we could see the resident iguanas, always difficult to photograph because they quickly hid. One of the times we were in our pool, an all green iguana climbed the huge palm tree beside us! So beautiful to see! Also in this afternoon two squirrels played near the pool and at low tide huge crabs appeared.

The first day I saw people working at the hotel and some street vendors climbing the rock that bordered our beach. I also decided to climb it to check the rest of the bay, occupied with other resorts, much larger and with more people.

On the second day I went with my mother-in-law to the city center, as I do not like to stay in the hotel all the time, and visited the church that contains the world’s largest virgin of Guadalupe – painted on the ceiling from one end of the church to the other . I also bought fruit to bring to Portugal and visited the beach of public access, full of people sitting at the restaurants at the beach from where the sand starts until the sea. The sea was the only less positive point in our hotel. Huatulco is known for its calm water bays. Our hotel was in fact in a bay, but exactly facing its opening and it was red flag during the three days that we were there. I still tried to go in, because I did not want to leave without taking a dip in the Pacific, I spent a good ten minutes looking at the sea, studying the waves, the interval between them and so on. I decided that I had found the best place, barely entered, my feet couldn’t feel the ground and at the same time it was the place where the waves were breaking. As I didn’t go to enter too much and don’t feel the sand in my feet, the wave broke exactly on top of me sending me directly back to the beach, showing me my place 😛

On the third day the “weekend tourists” disappeared and we stayed almost with the hotel just for us! We were finally able to enjoy the all inclusive, mango margaritas to be brought whenever we wanted to the edge of the pool and all day chatting in the sun! 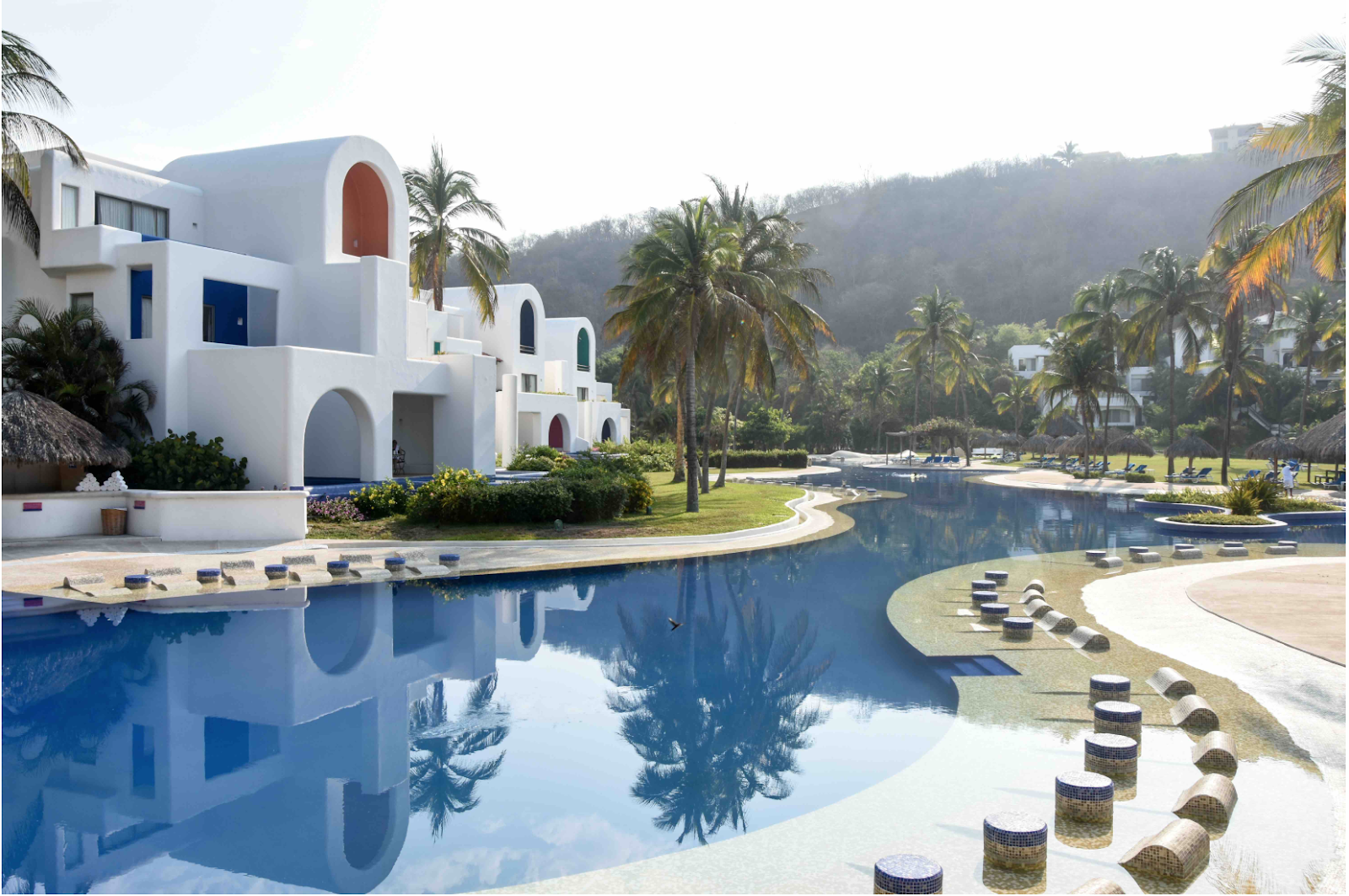 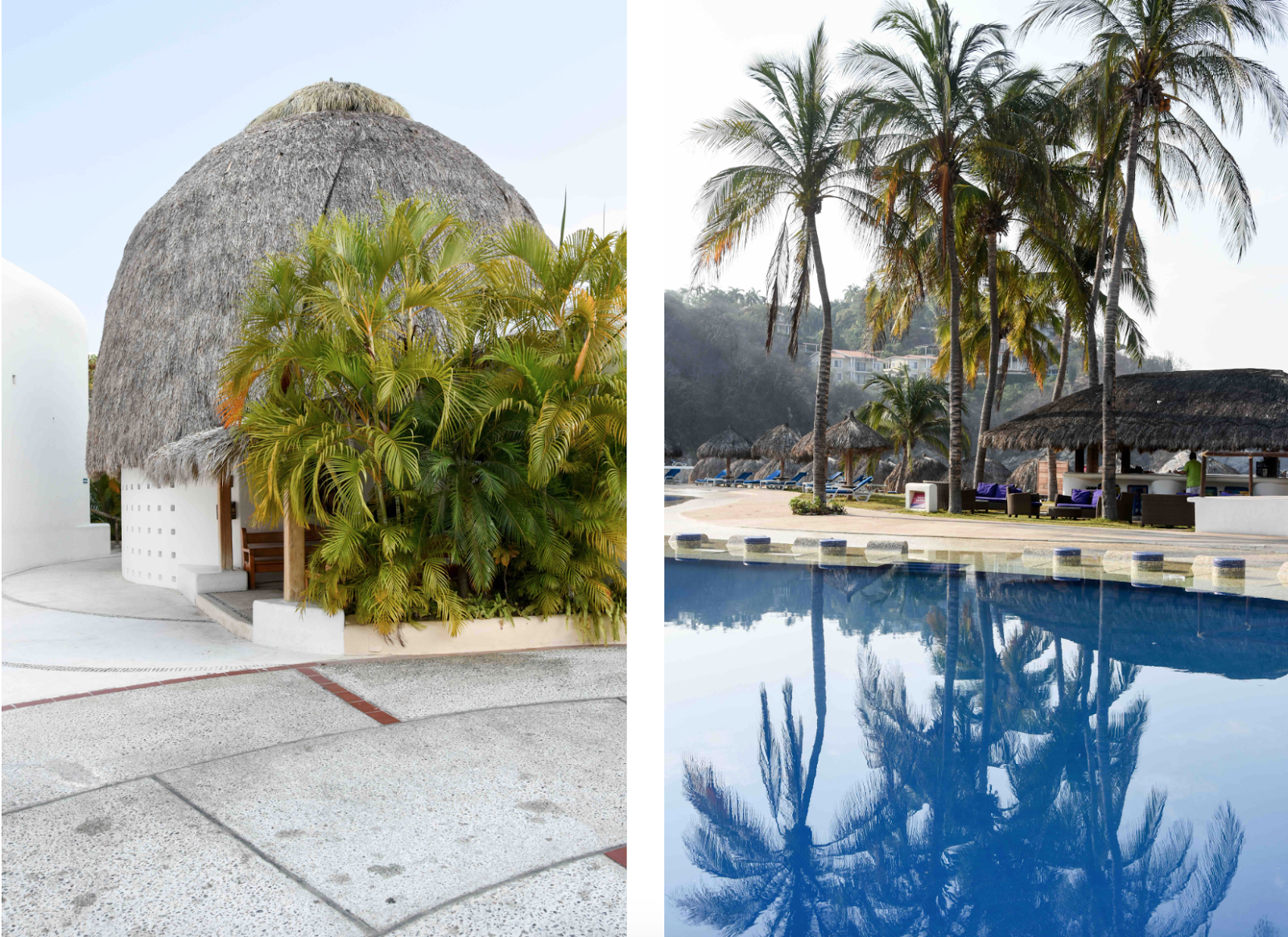 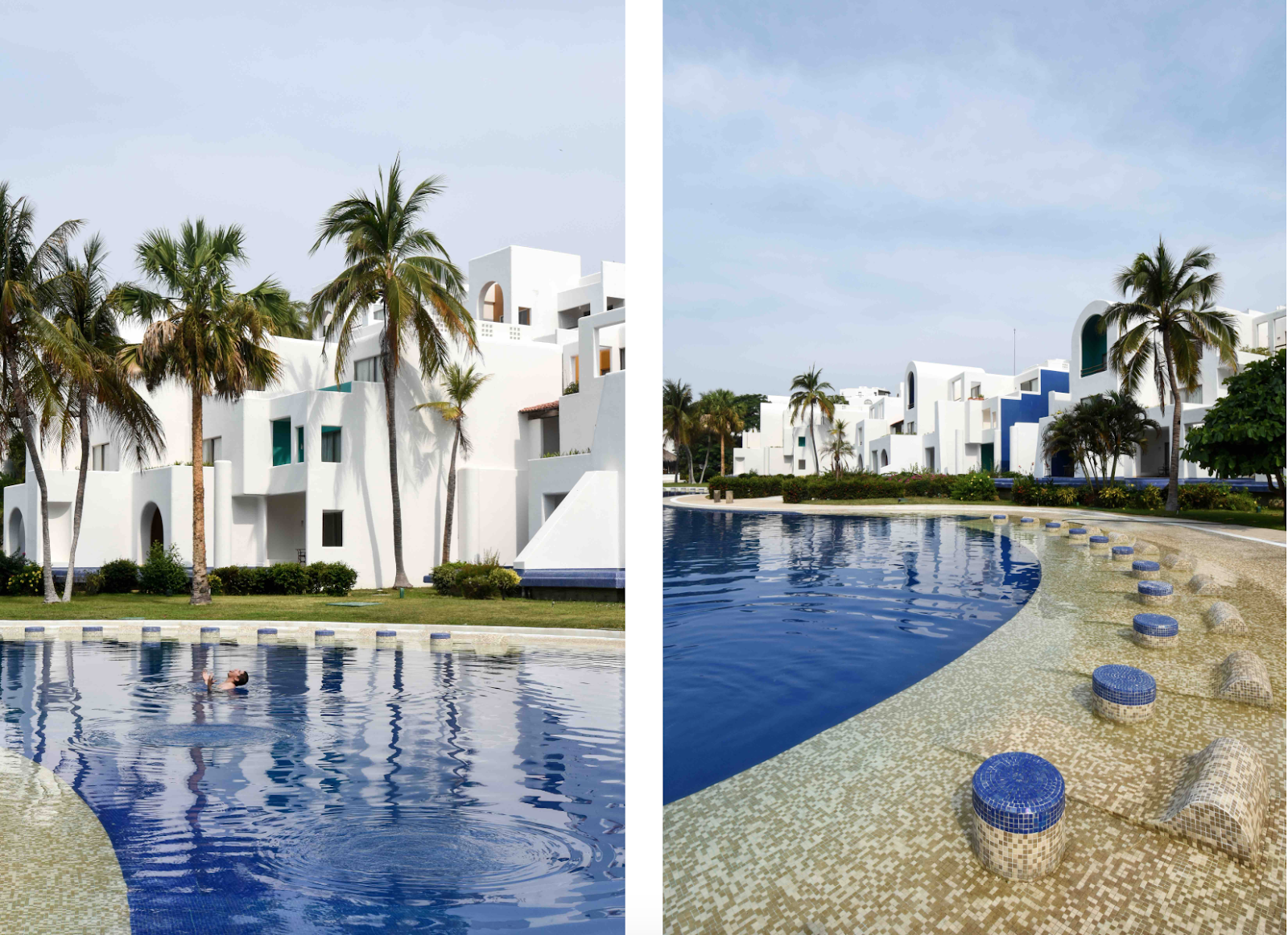 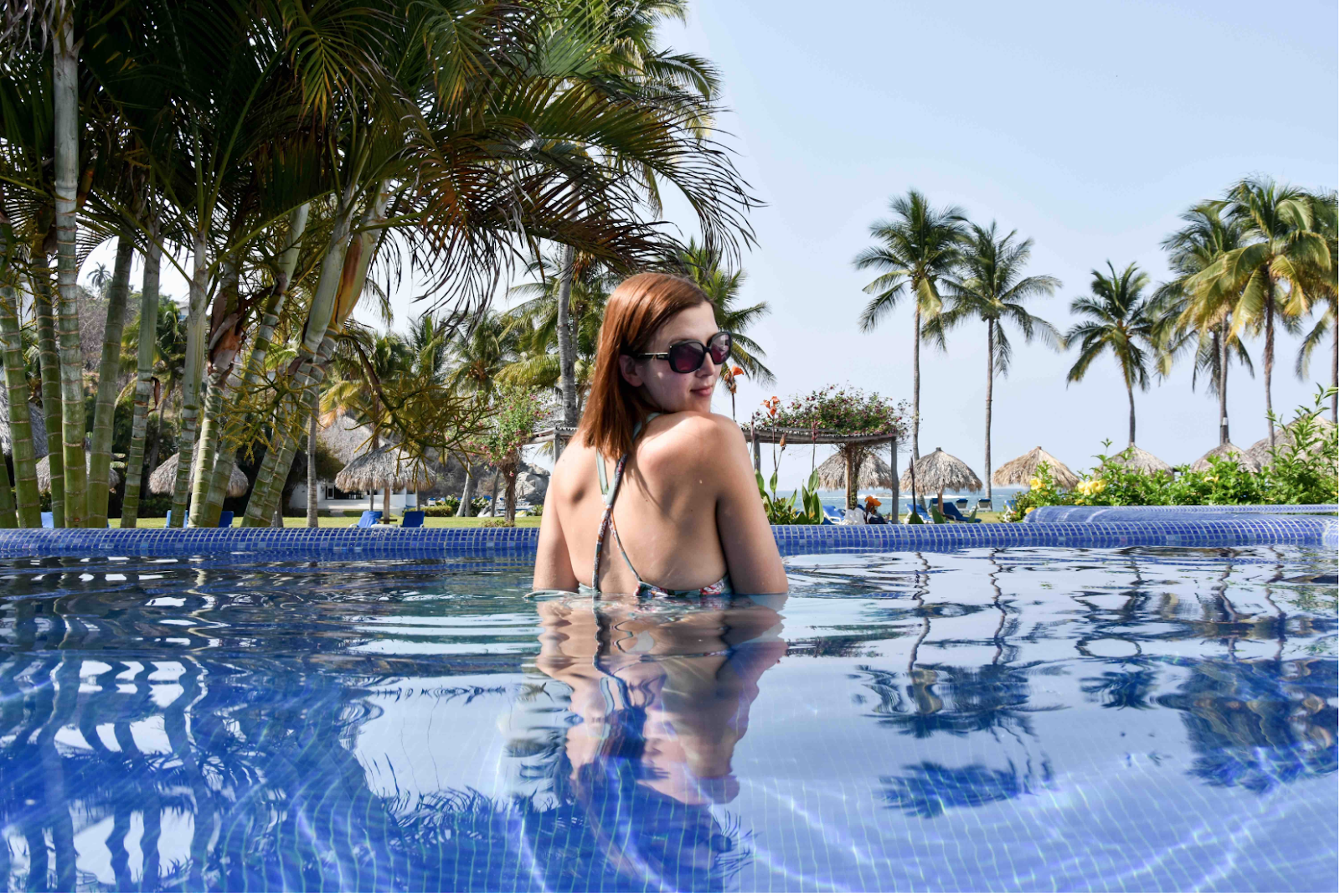 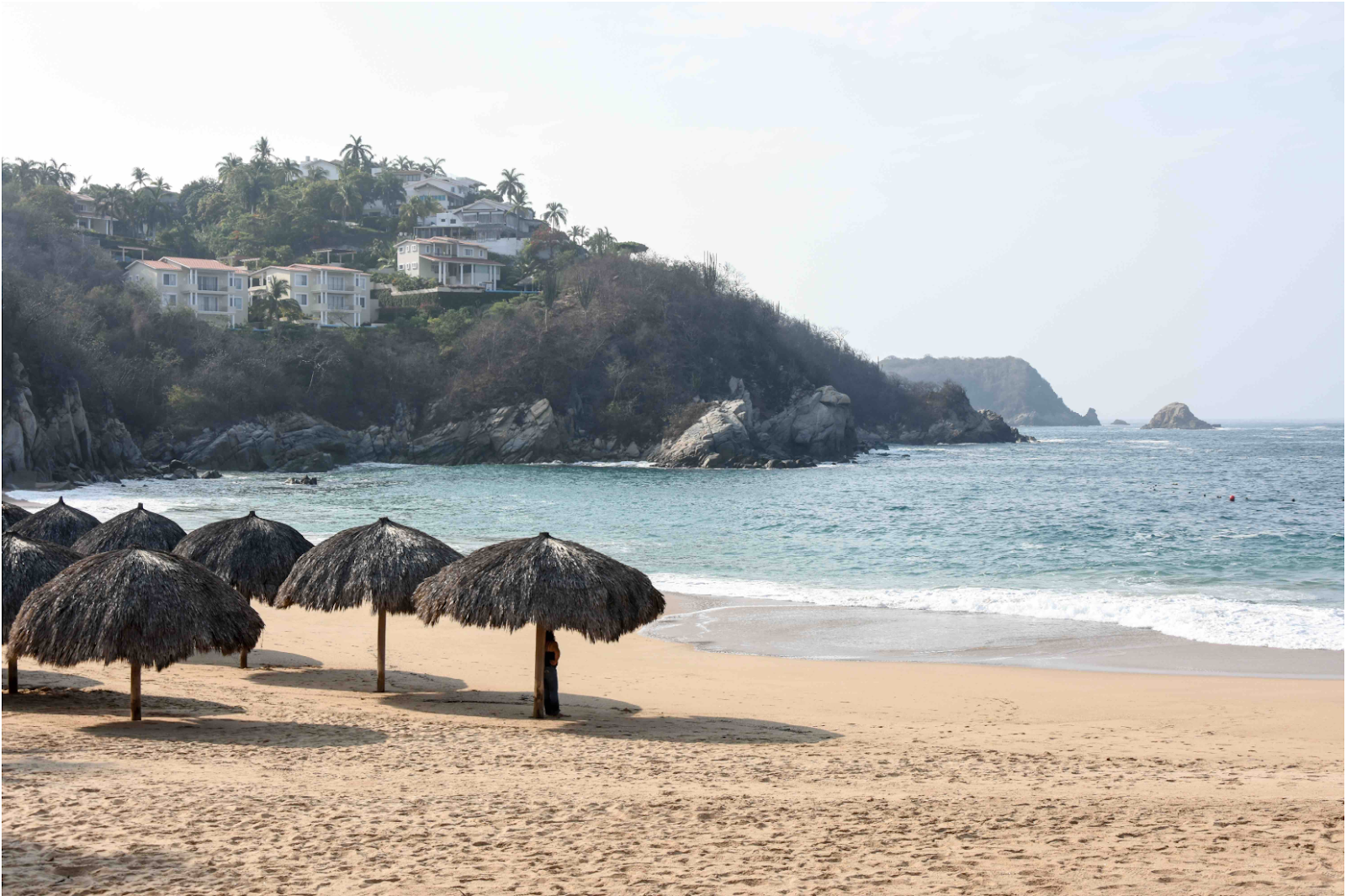 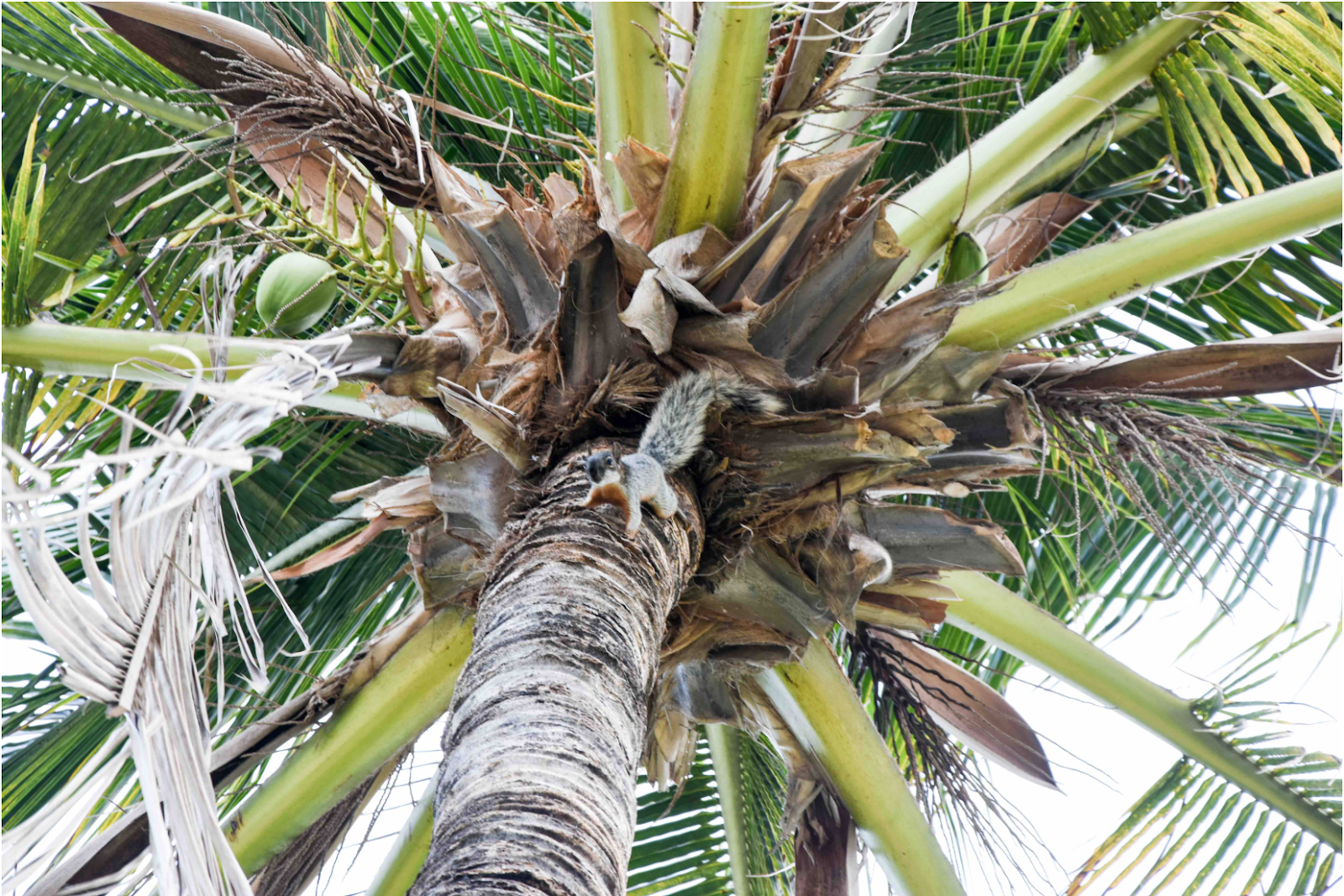 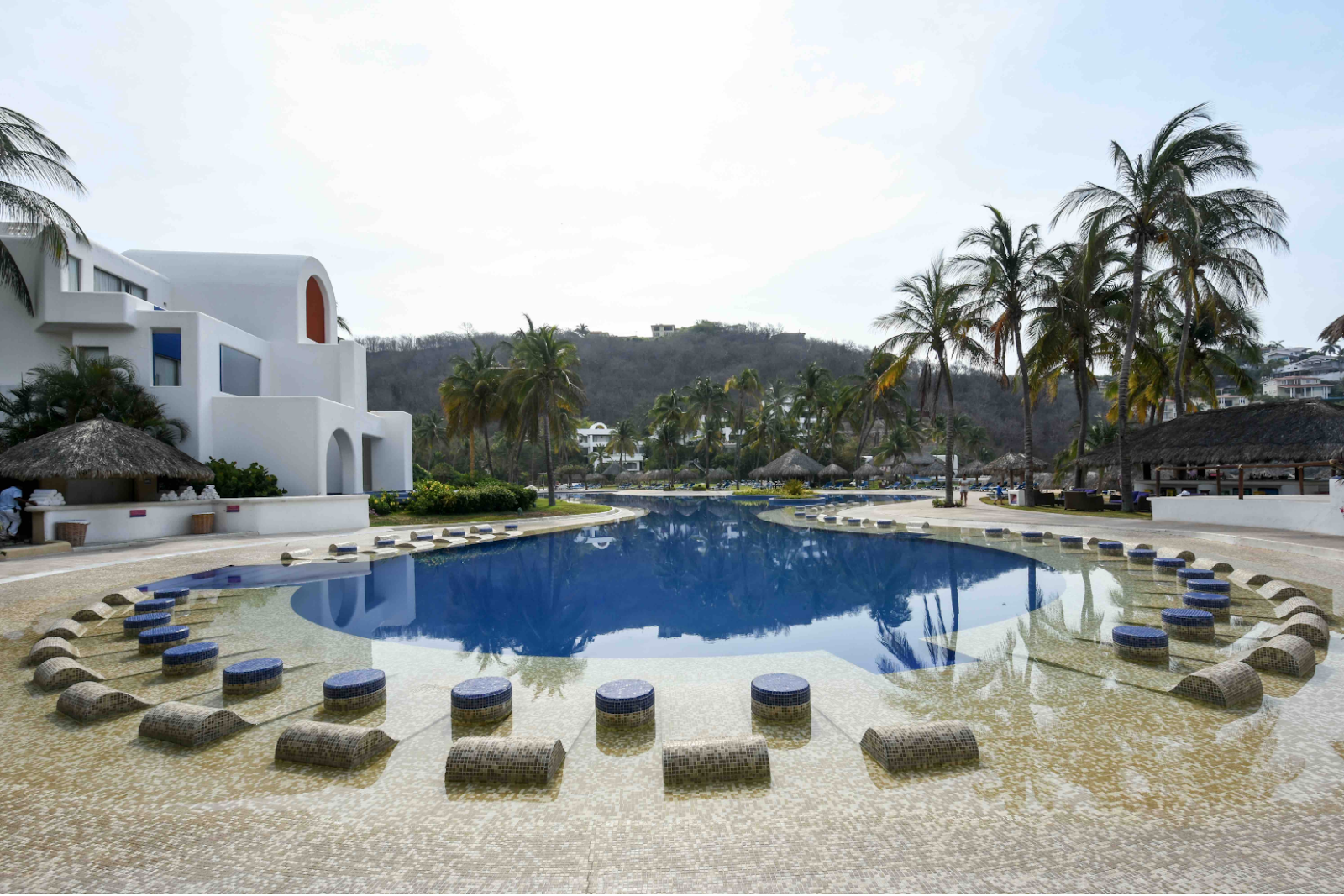 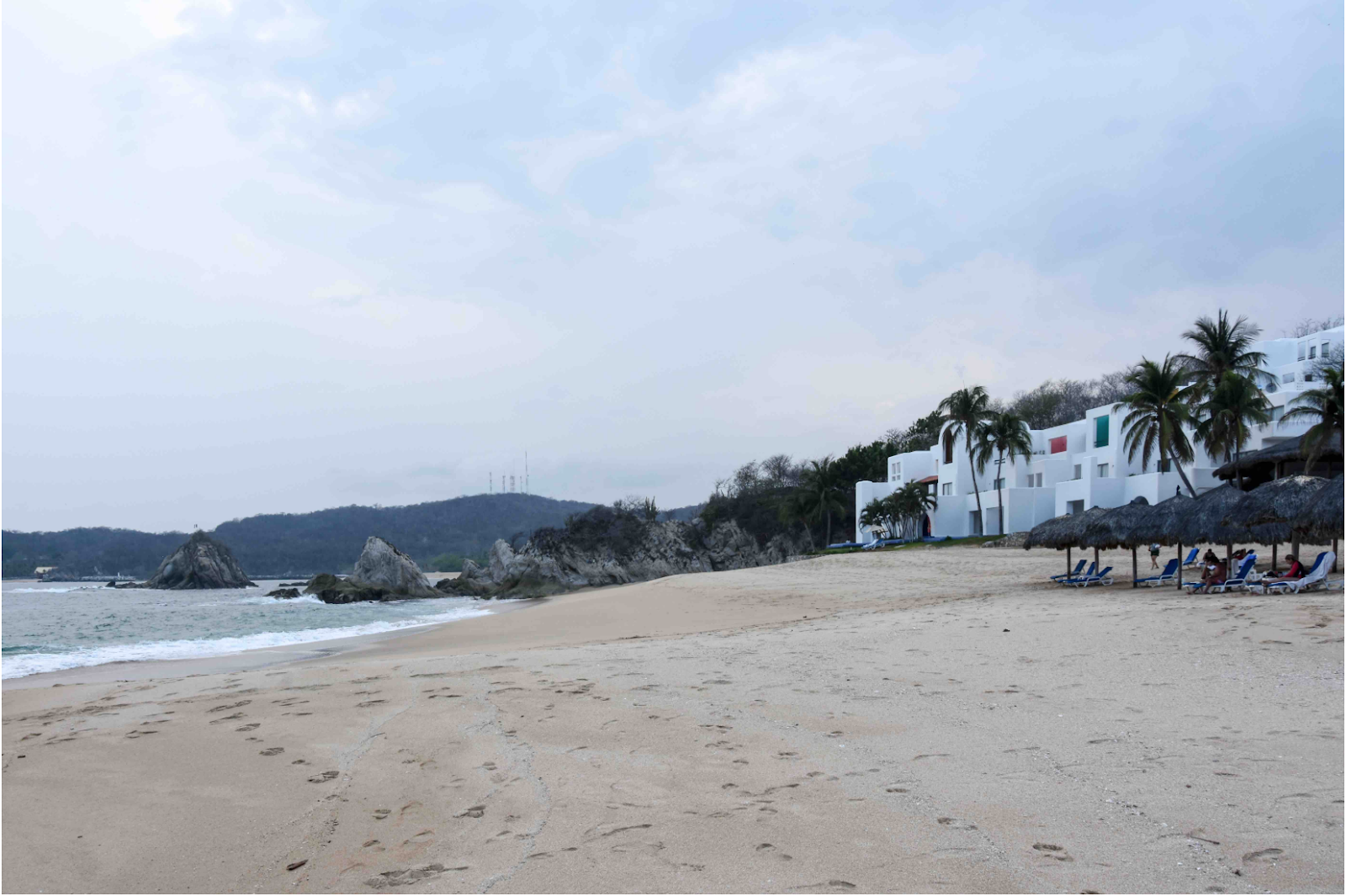 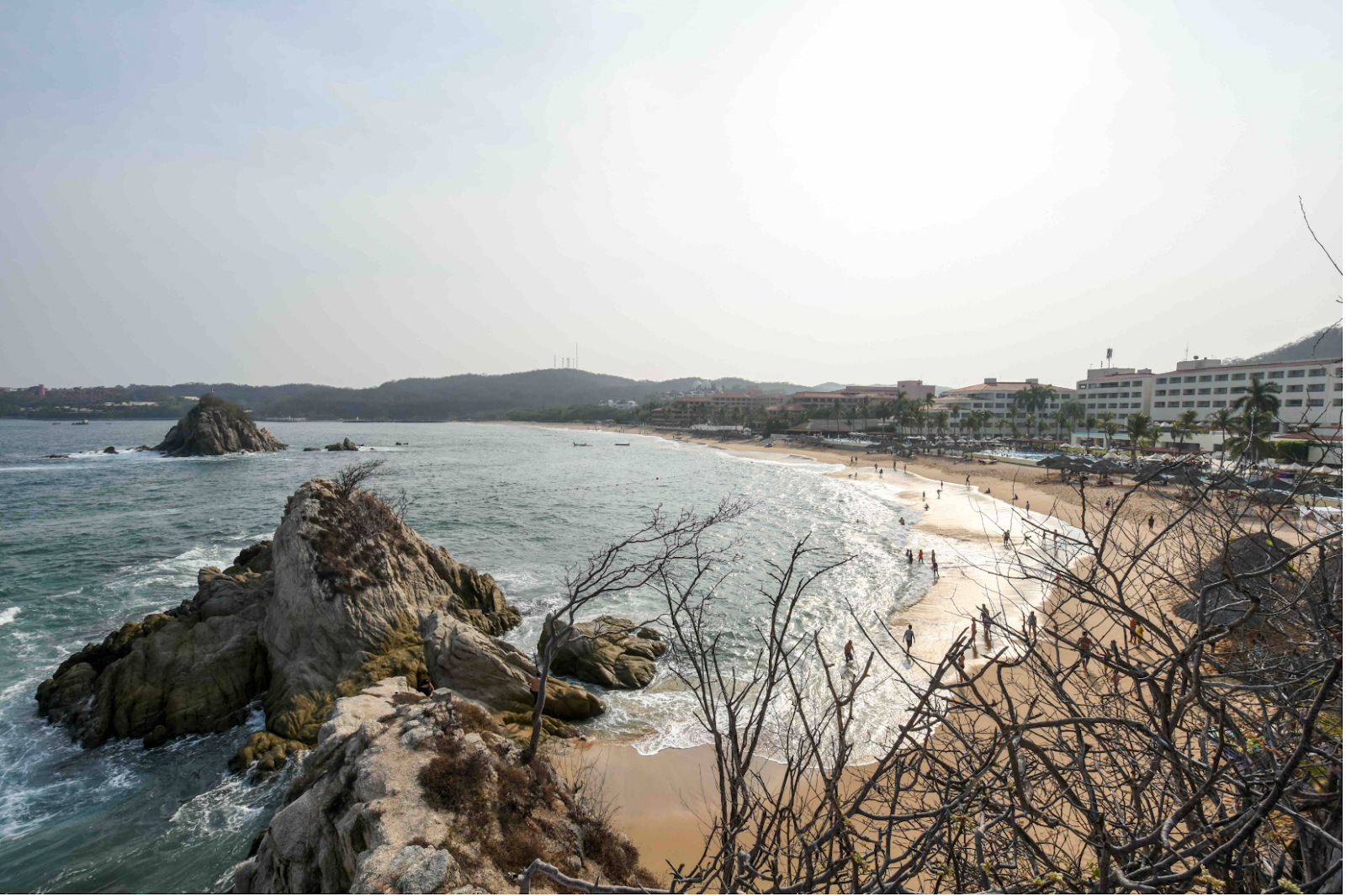 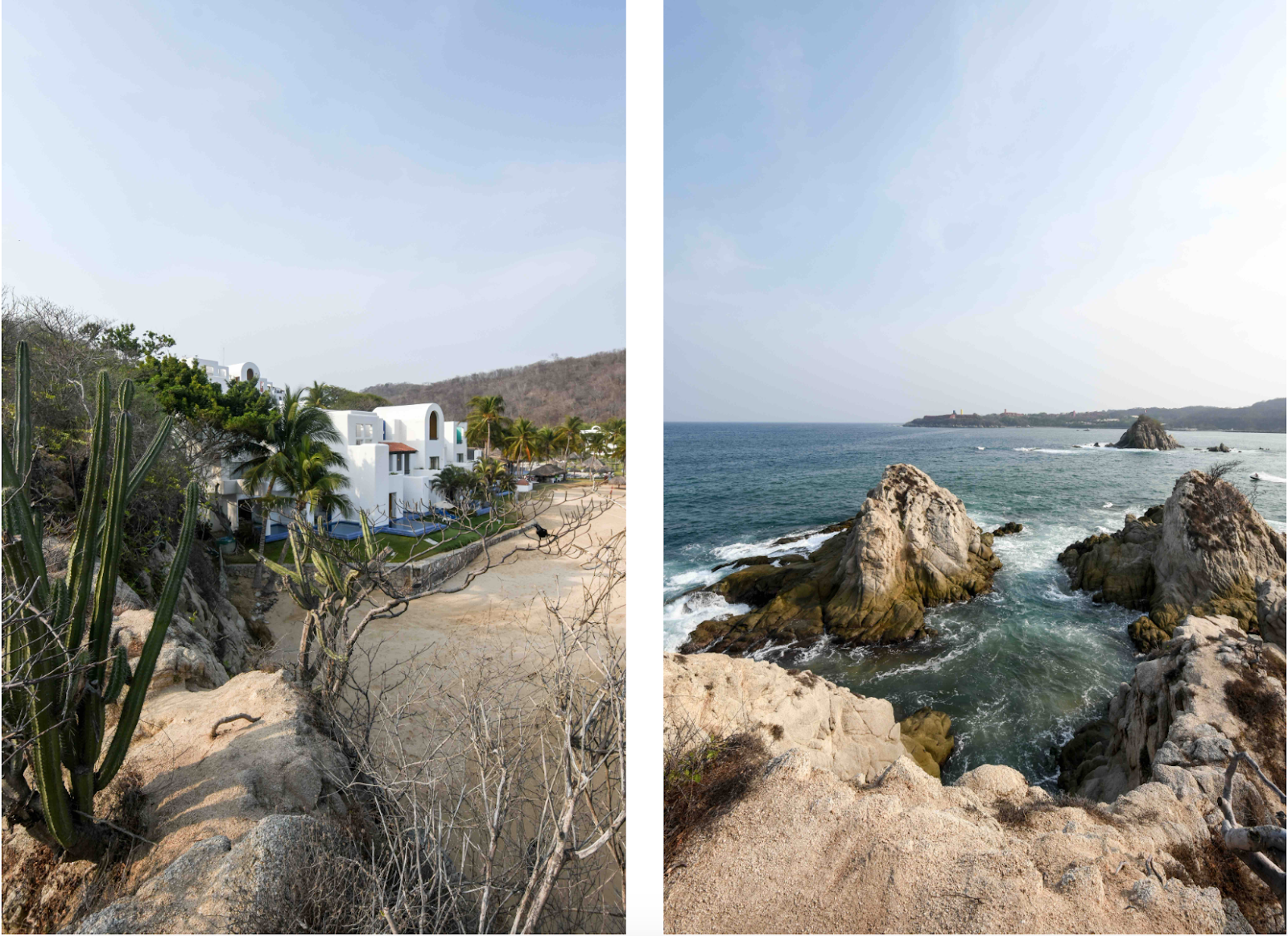 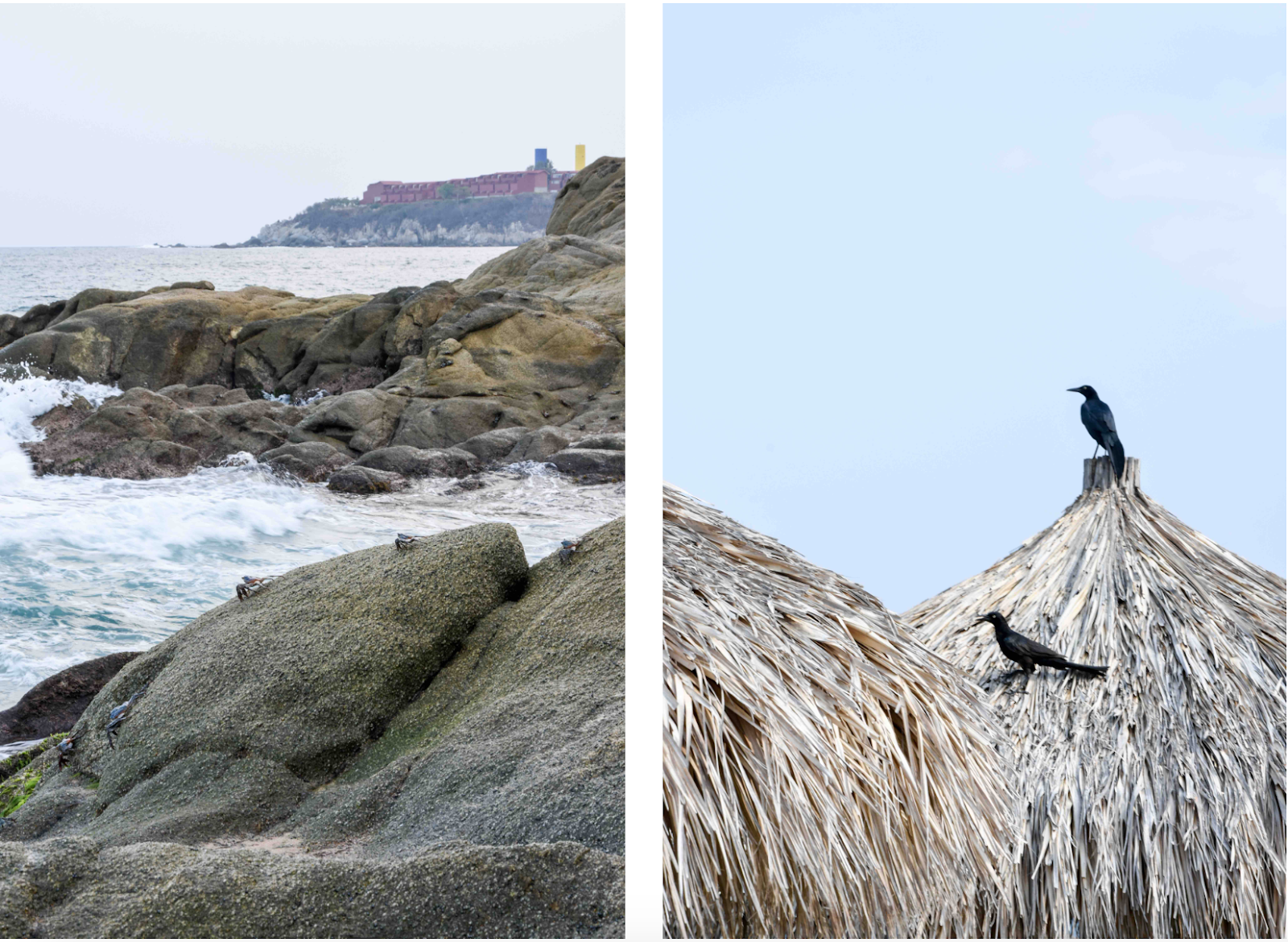 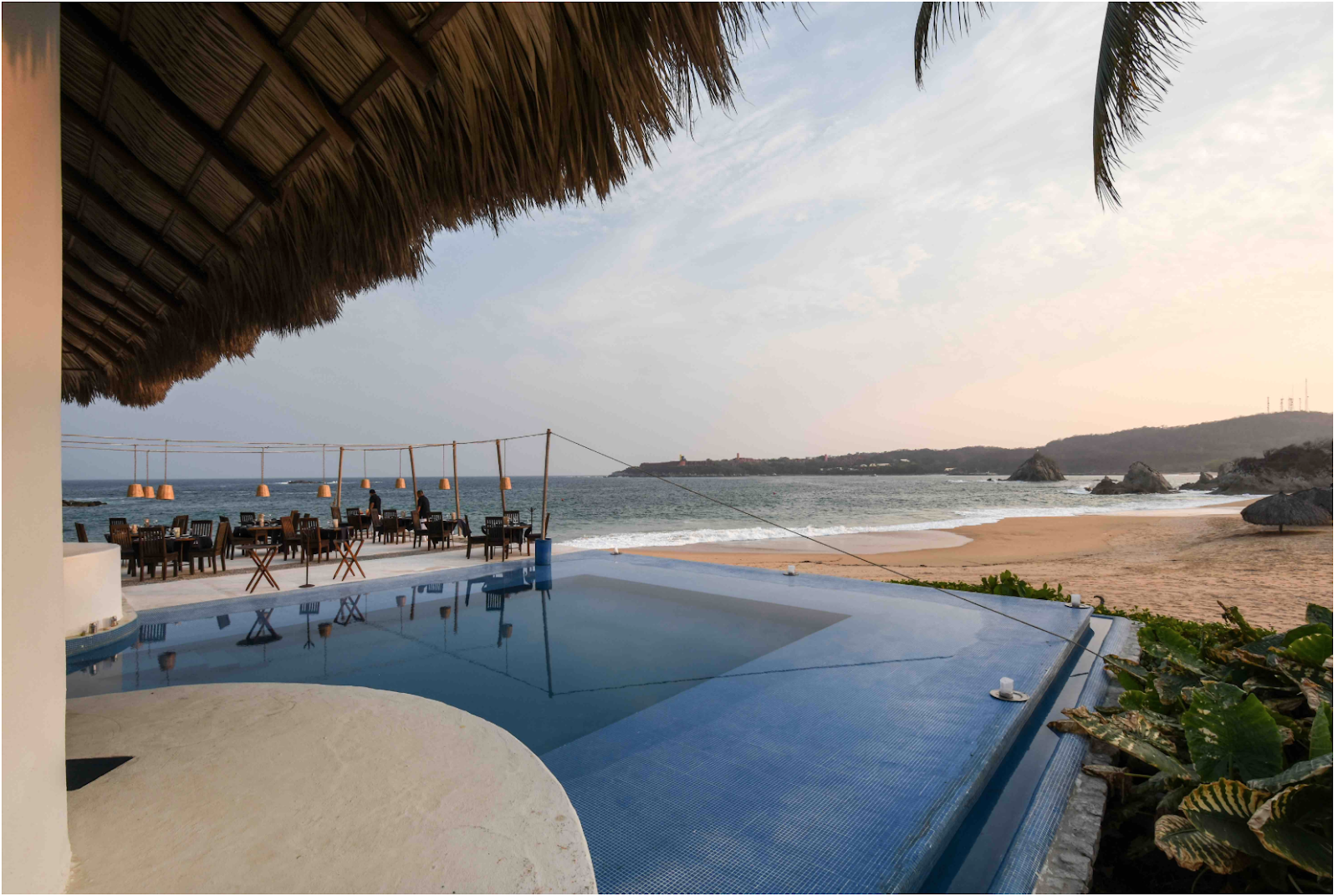 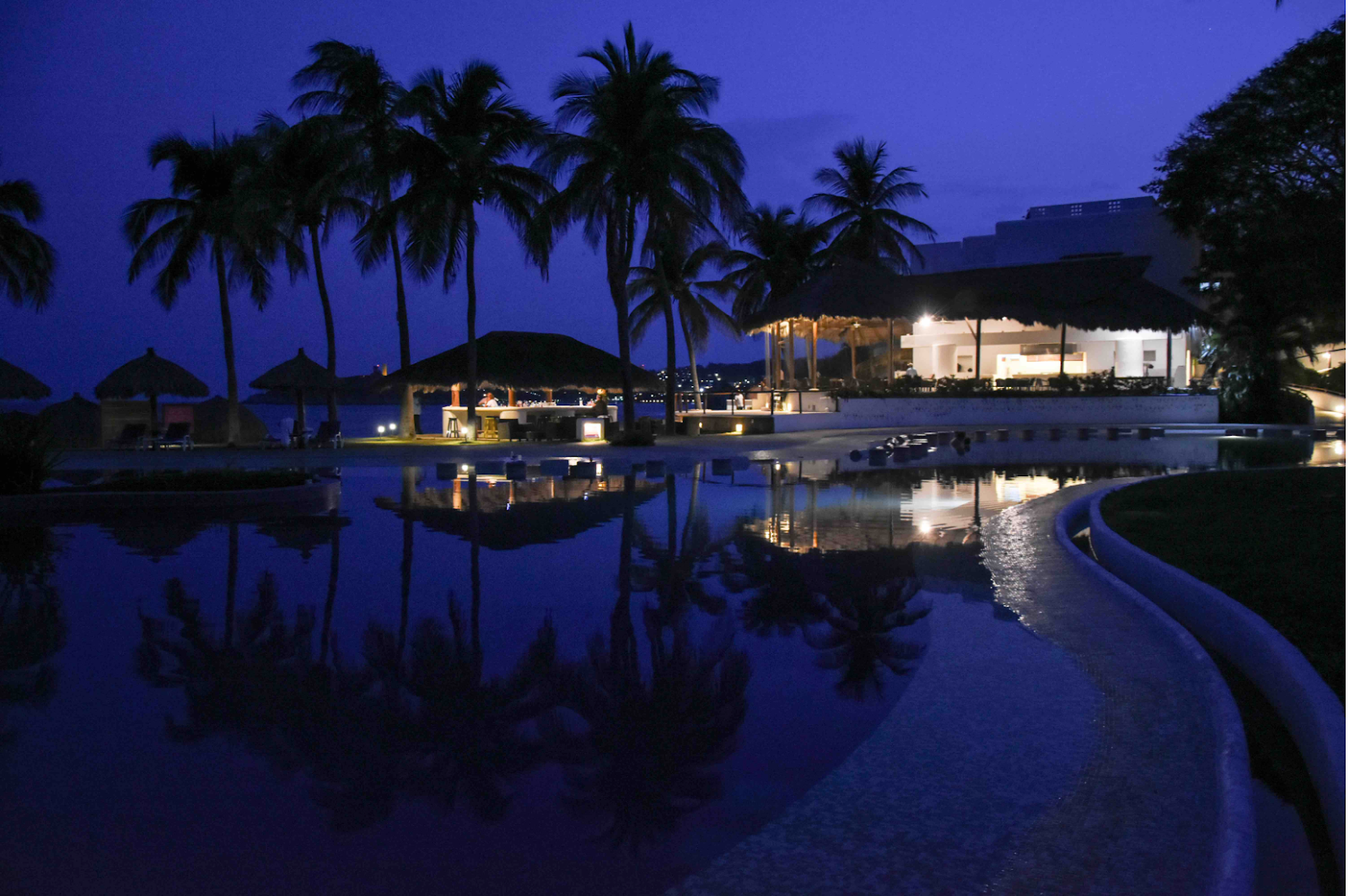 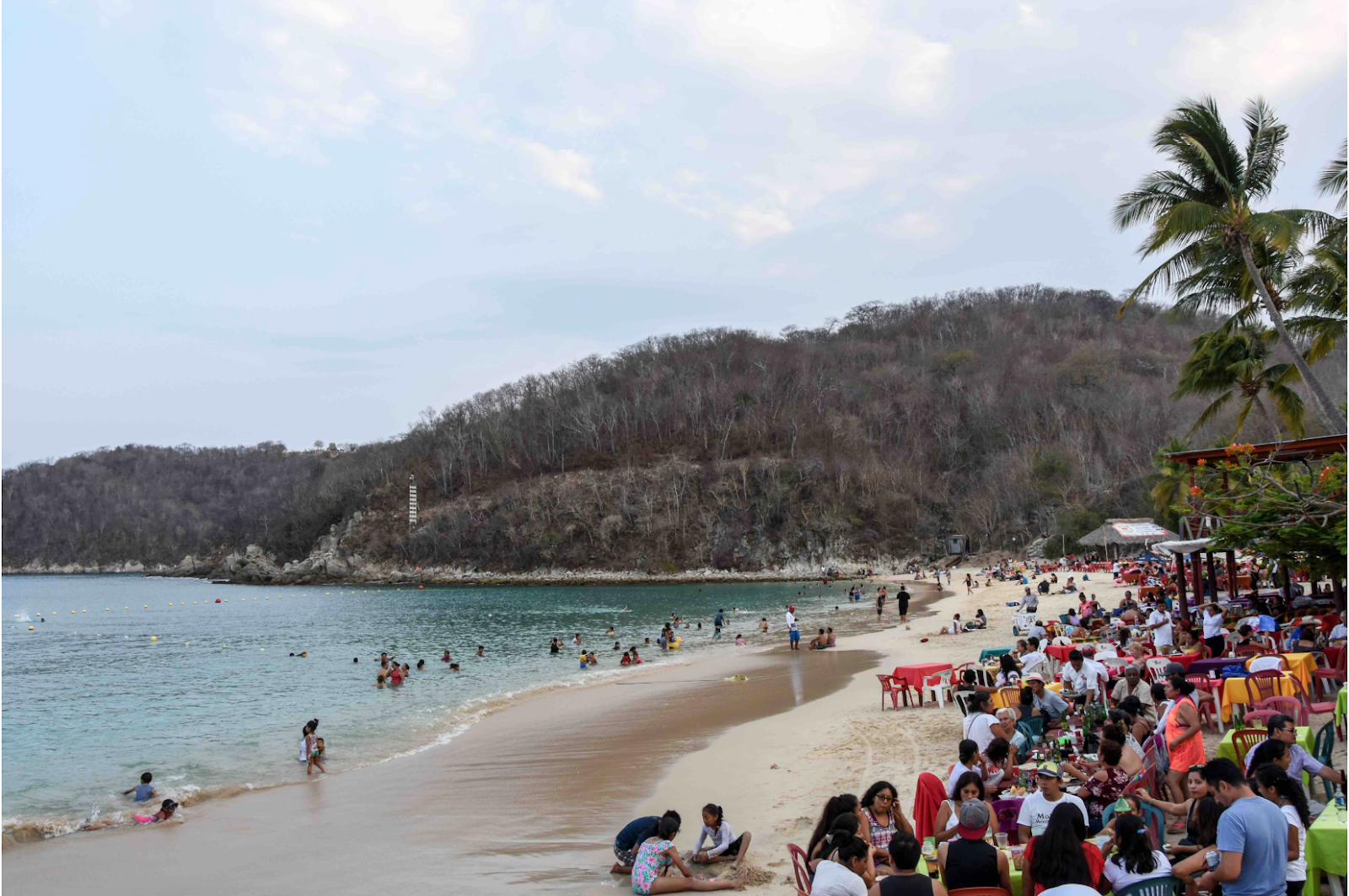 .
From Huatulco I returned directly to Lisbon, but the trip was not easy! When we fly with industry tickets, we are subject to availability. From Huatulco to Mexico City it was relatively quiet, they gave me my seat just at the gate but it was ok. When I arrived in Mexico City,I had still five hours before my next flight and I tried to dispatch the suitcase to walk around more comfortable. I was warned at once that there were no seats and that I should return to the counter one hour before the flight to check if the situation had changed. I went to the computer to see what alternatives I had. The flight to Madrid that I had booked in addition to having zero seats, had forty people on the waiting list – apparently Aeromexico sells Standby tickets to anyone, not needing to be in the industry. The alternatives were the next flight to Madrid or the one to London, more than four hours later … I booked them both! When there was an hour missing to the London one, I went to see if there was a place … they started calling some names but mine was not being called. They stopped calling names and I was almost crying, I could not leave Mexico and worse, I would have to miss work! Finally they said my name! I even jumped! So I went to London and from London to Lisbon with my dear TAP! In total I was 28 hours in transit, from leaving the Hotel in Huatulco until leaving the airport in Lisbon…