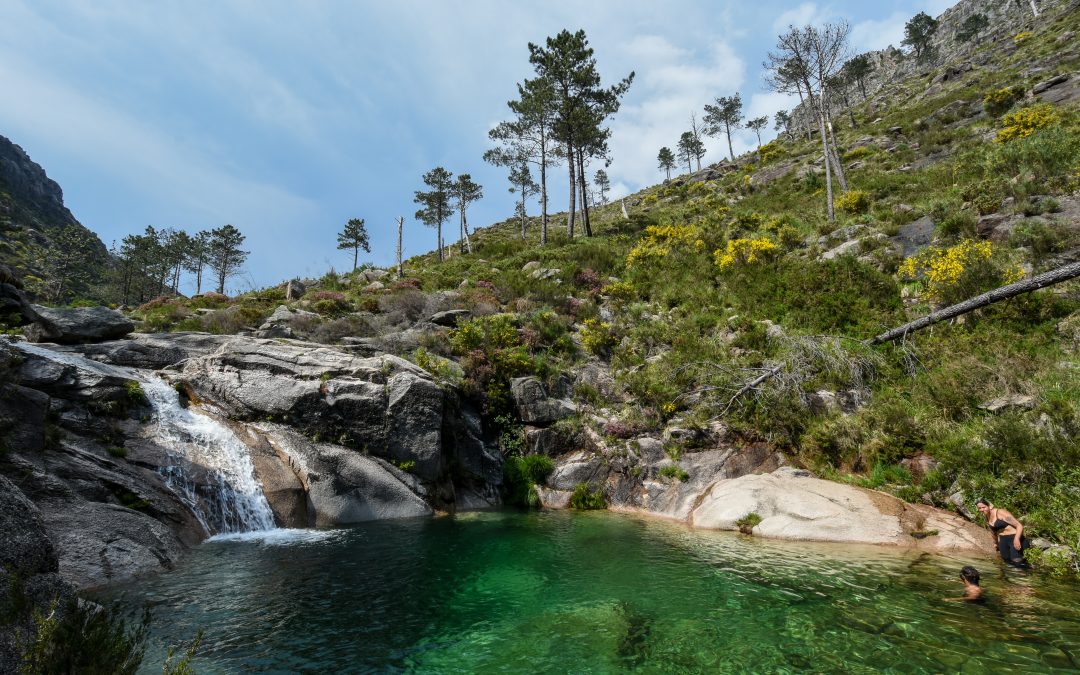 The Peneda – Gerês National Park is one of the most beautiful places in Portugal and therefore the first place I thought of for a weekend getaway. Two days of trekking through the mountains visiting waterfalls, viewpoints and lagoons, finished with delicious dinners!

The arrival at Gerês, full of curves and counter curves, was magnificent. In front of our eyes we had Caniçada Dam, a huge artificial lake on the Cávado River, which is divided into three branches and with two bridges in the center from which we have an excellent panoramic view of the entire lake and the mountains that surround it.

From there we drove by the village of Gerês, but there was no time to lose, so we went straight to Pedra Bela viewpoint. 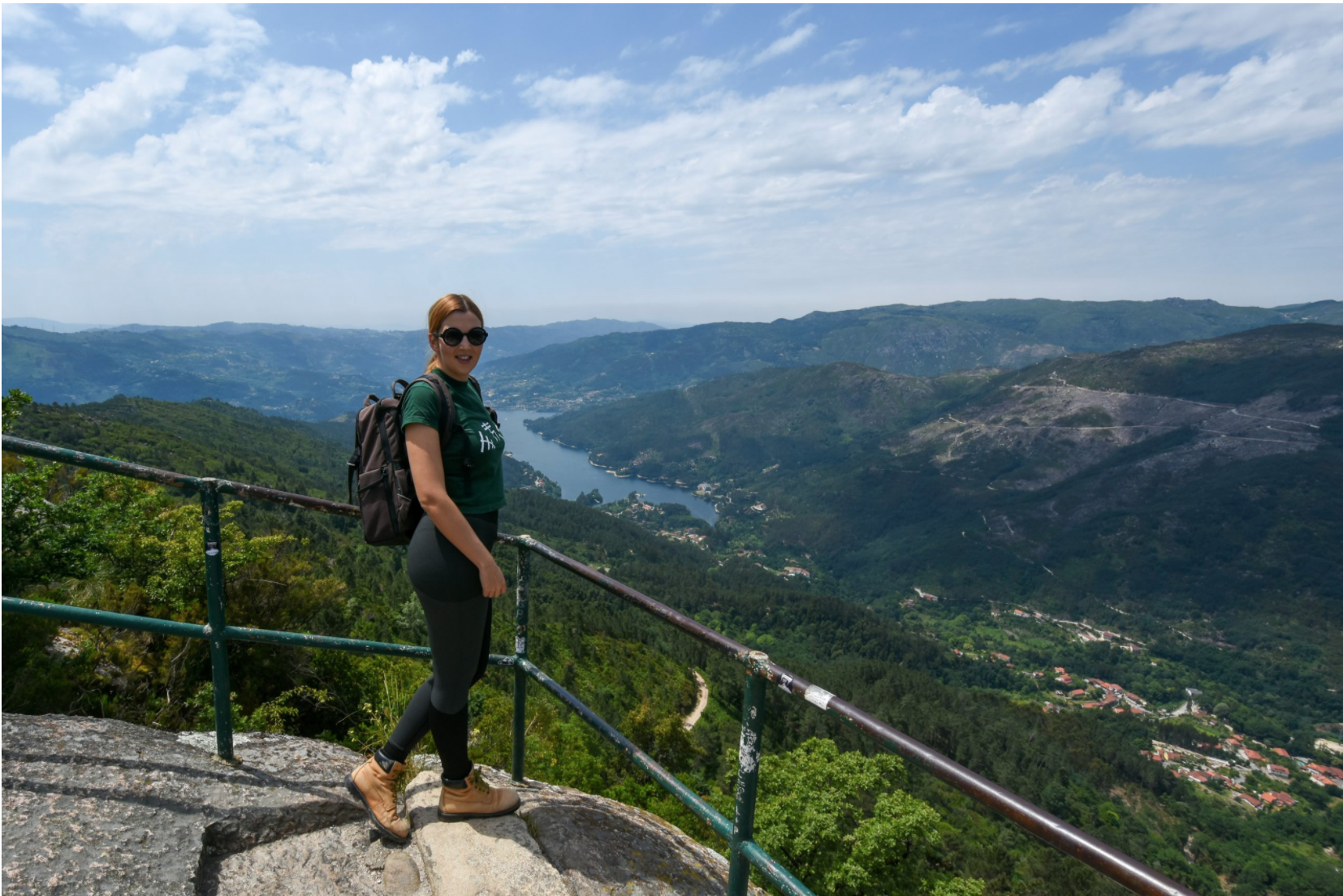 This viewpoint undoubtedly had a beautiful view over the lake and the village we had just crossed, but we would have to continue to the Rocas viewpoint for an overview of the mountain complex. If on the first one we could “park at the door”, this one required a steep climb to reach the top of this rock, which would be some 20-30 meters above the place where we left the car.

From there to the beautiful Arado waterfall is approximately 1000m, which can be done on foot, or you can take the car to the parking lot that is located 400m after the Waterfall and from where the walk to Poço Azul begins. It is possible to have a view of this waterfall from a small viewpoint at the top of some stairs, very well signposted, although we saw some people walking through the water to see it from closer. 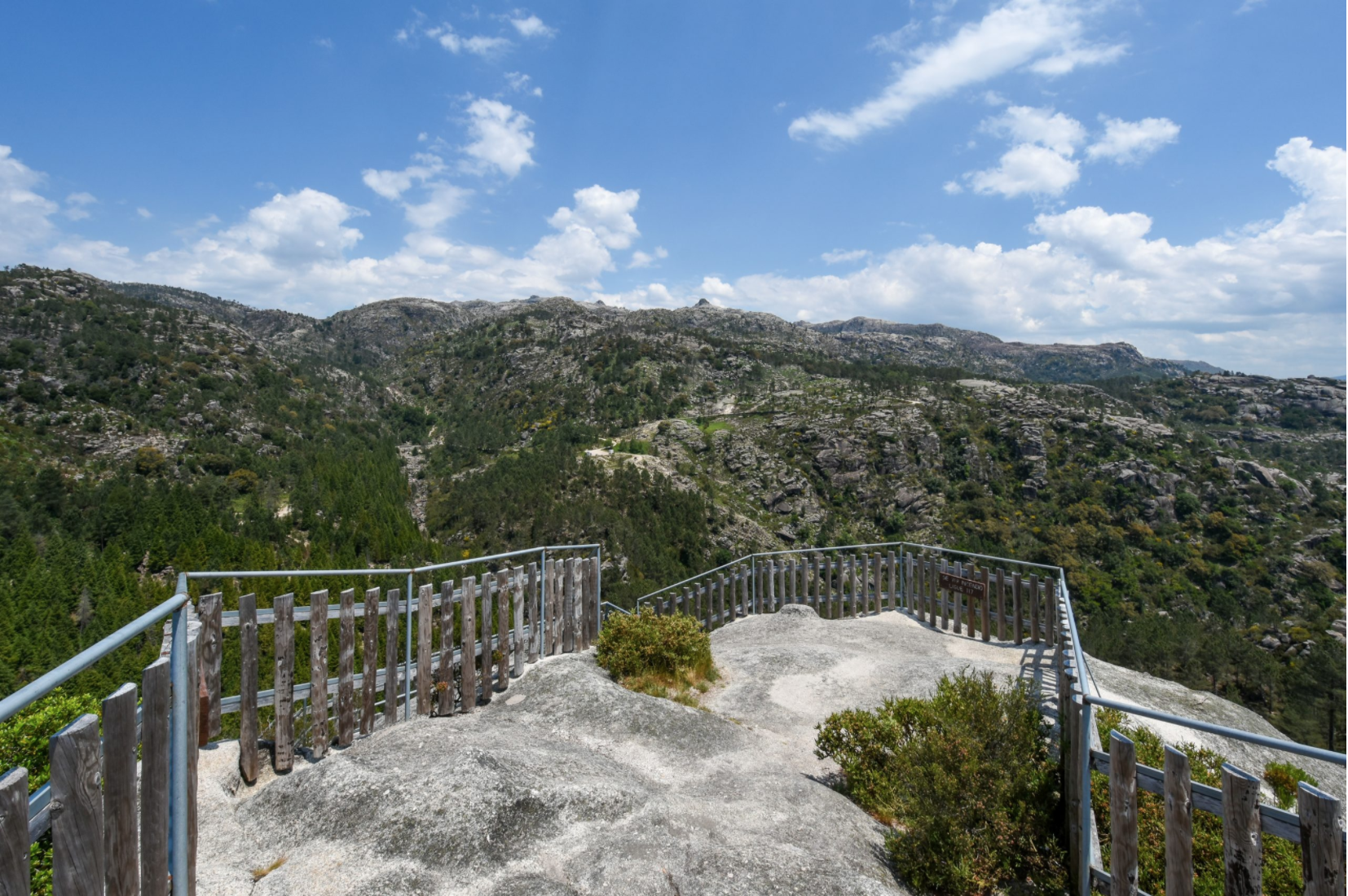 Then began the long walk to the Poço Azul. I confess that it was much longer and more difficult than I expected, mainly because of the intense heat and the little shade that doesn’t exist in most of the way. The Viajar entre Viagens blog’s instructions on how to get there were essential as the signs along the trail are not clear at all (in fact, right at the beginning, we were surpassed by a group we met later on, as they had gone by a much longer path, who ended up giving up and didn’t even reach the Well).

So I leave here the directions that we followed so that you can reach Poço Azul in the most direct way:

After such a long walk in the scorching heat, it was time for a plunge. The water was obviously ice cold, which I only realized when I submerged my head and felt my heart start to come out of my mouth. Still, it’s a fantastic and peaceful place, to be in communion with nature, and your feet in the water. When we arrived, there were three other couples present, clearly the maximum capacity so that this space wouldn’t feel crowded. We were therefore happy that the group that had surpassed us at the beginning of the hike had given up. In the end, we were just four people and we didn’t leave until the sun went behind the mountain, leaving Poço Azul in the shade. 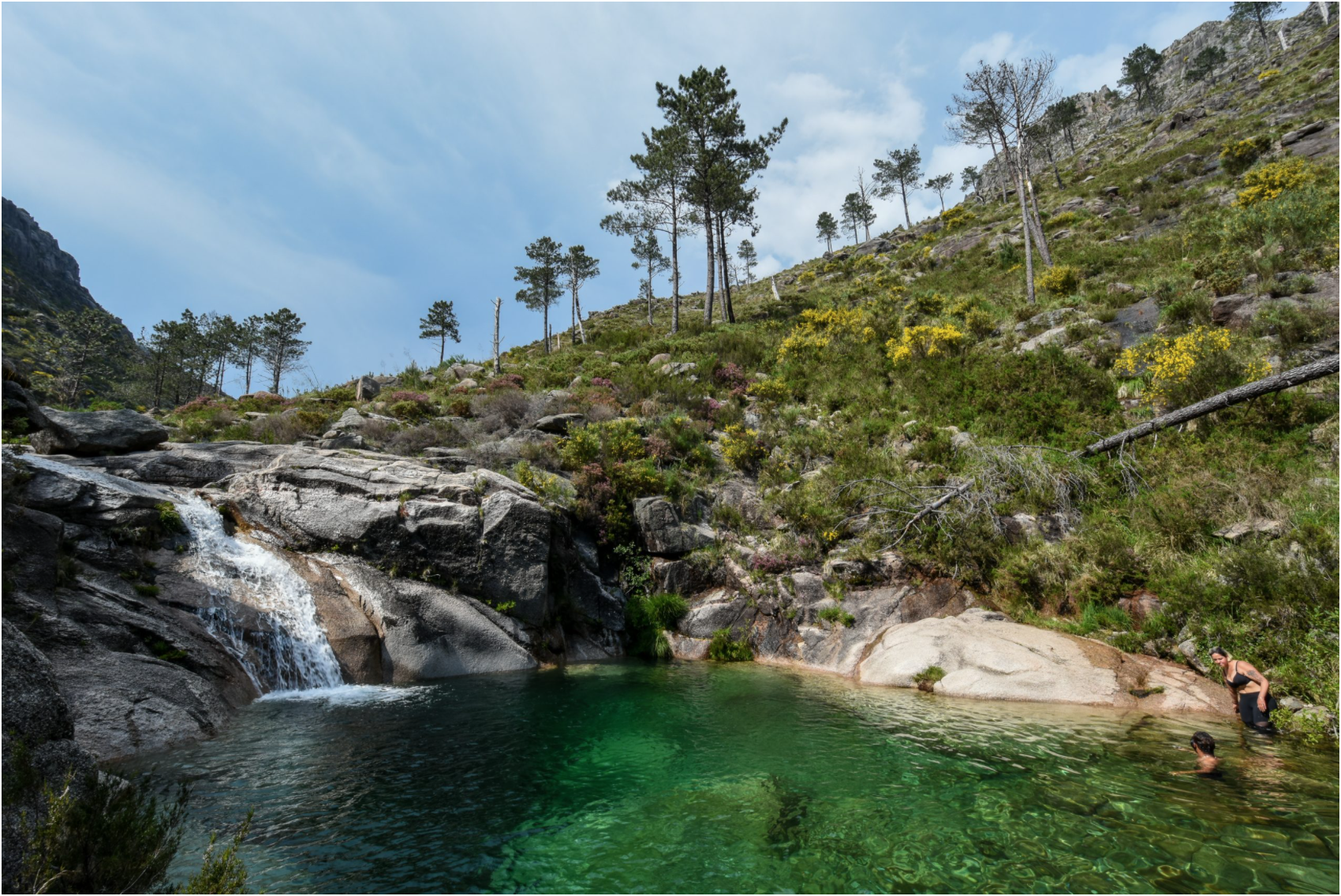 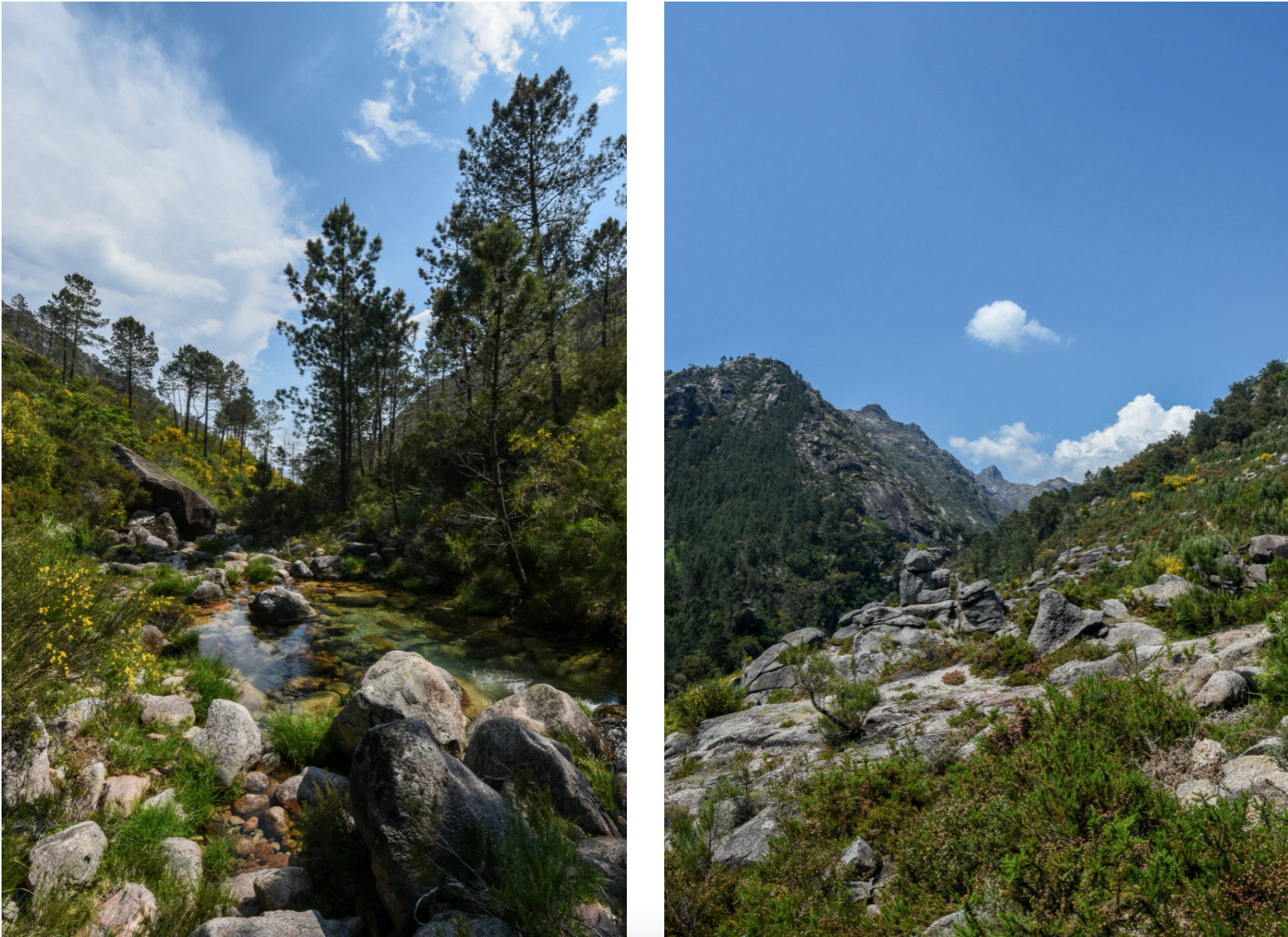 After a long walk back, tired but happy, it was time to leave things at the hotel and finally eat something (since breakfast we just had fruit and biscuits).

We chose the Hotel Nations Gerês because, during our search, it seemed to offer the best price-quality and we were extremely satisfied. From the incredible friendliness of Cláudia, Polish by birth but already Portuguese at heart, to the views from our private balcony and the very complete breakfast, we can’t complain about anything!

It was in the hotel that we were suggested to go for dinner at Lurdes Capela Restaurant, which we liked so much that we repeated it the next day! On the first evening, we ordered the typical steaks from the region, beef from the Cachena breed, mine with Serra cheese, delicious! And finally, an Abade de Priscos Pudding like I hadn’t eaten in a long time! On the second night, Jorge ordered the dish that I had eaten the night before and I ordered Cod Fish, ending this time with an equally wonderful Toucinho do Céu. All of this obviously accompanied by a good green wine, exactly from this region – the restaurant also has its own craft beer.

The next day was gray and cloudy, including the occasional rain fall, the kind that neither wets nor stops wetting. The first destination was the ‘Tahiti Waterfall‘ (also known as the Fecha de Barjas Waterfall). This is one of the most accessible waterfall to visit, as it is located on the side of the road and so it is possible to leave your car there. There are warnings saying this is a very dangerous place, which follow the reports I had already read of people who had fallen there and even of people who had already lost their lives. So I walked with great caution and did not venture to places with more water, where I could slip, or got too close to the edge. Even so, I managed to fall in a dirt area with my face straight into my camera, which I was carrying in my hand. Immediately I began to bleed from my nose, thinking for a moment that I had broken it. Fortunately the car was close and that’s when I was able to clean myself and realize that it was just a cut and that the biggest bleeding was coming from the inside of the nose (fortunately too, this happened when I was on my way back to the car, so I was able to visit the waterfalls in order to show you).

After, I discovered by a friend who visited Gerês a week after me and who shared very different photos of mine from this same place, that after crossing the bridge, still on the road, there is a path on the right that takes us to the foot of the waterfall. She assured me that the path was not dangerous.

It was imperative to get ice so that my nose wouldn’t swell, so I stopped at the next village, Fafião, where I had already planned to visit its viewpoint anyway. With ice on my face, I went up to this viewpoint, whose main interest is itself and not the view, since it is a metal bridge that takes us to the top of an immense monolith.

From there I went to the village of Pincães, to visit its waterfall. Leave your car at the entrance to the village and then follow the arrows to the waterfall. When you find a little water channel, we must follow it for 1km until we reach the beautiful waterfall. Note that after the arrow that says the waterfall is 400m away, the unpaved path seems to end in another waterfall that is not the one we are looking for. Keep following the water channel until you find Pincães waterfall. As it was a cloudy Tuesday, I had it all to myself the whole time I was there. 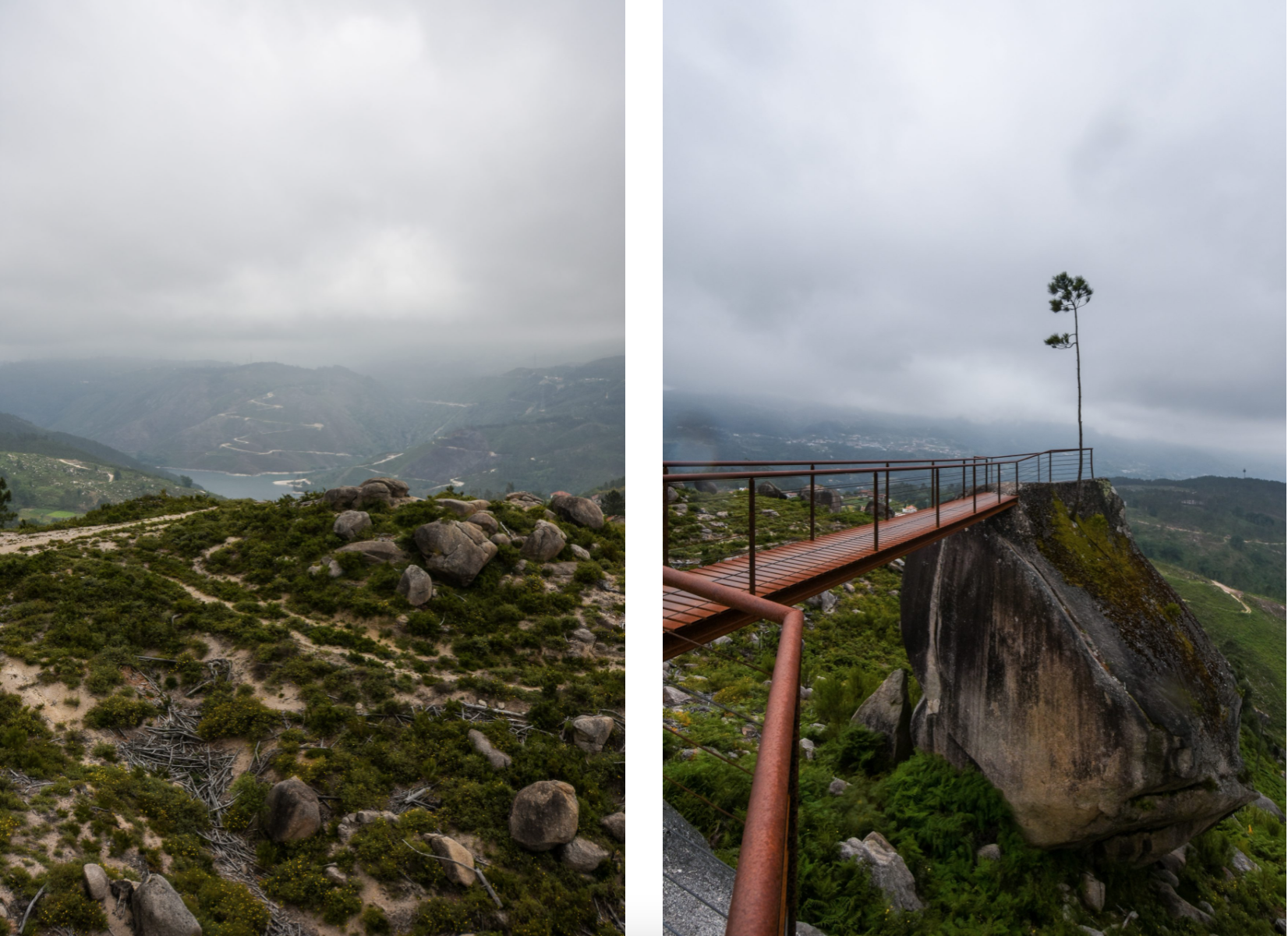 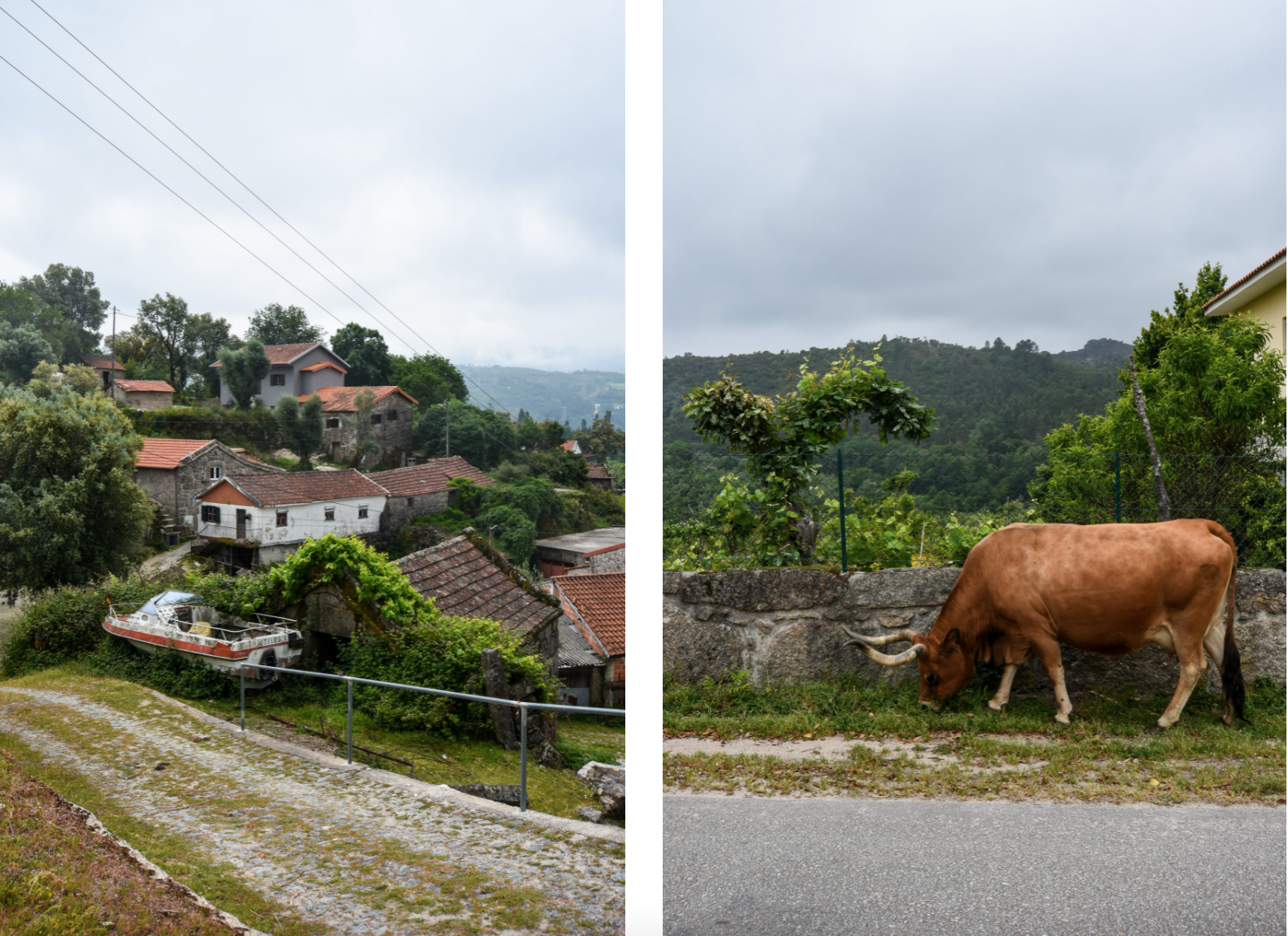 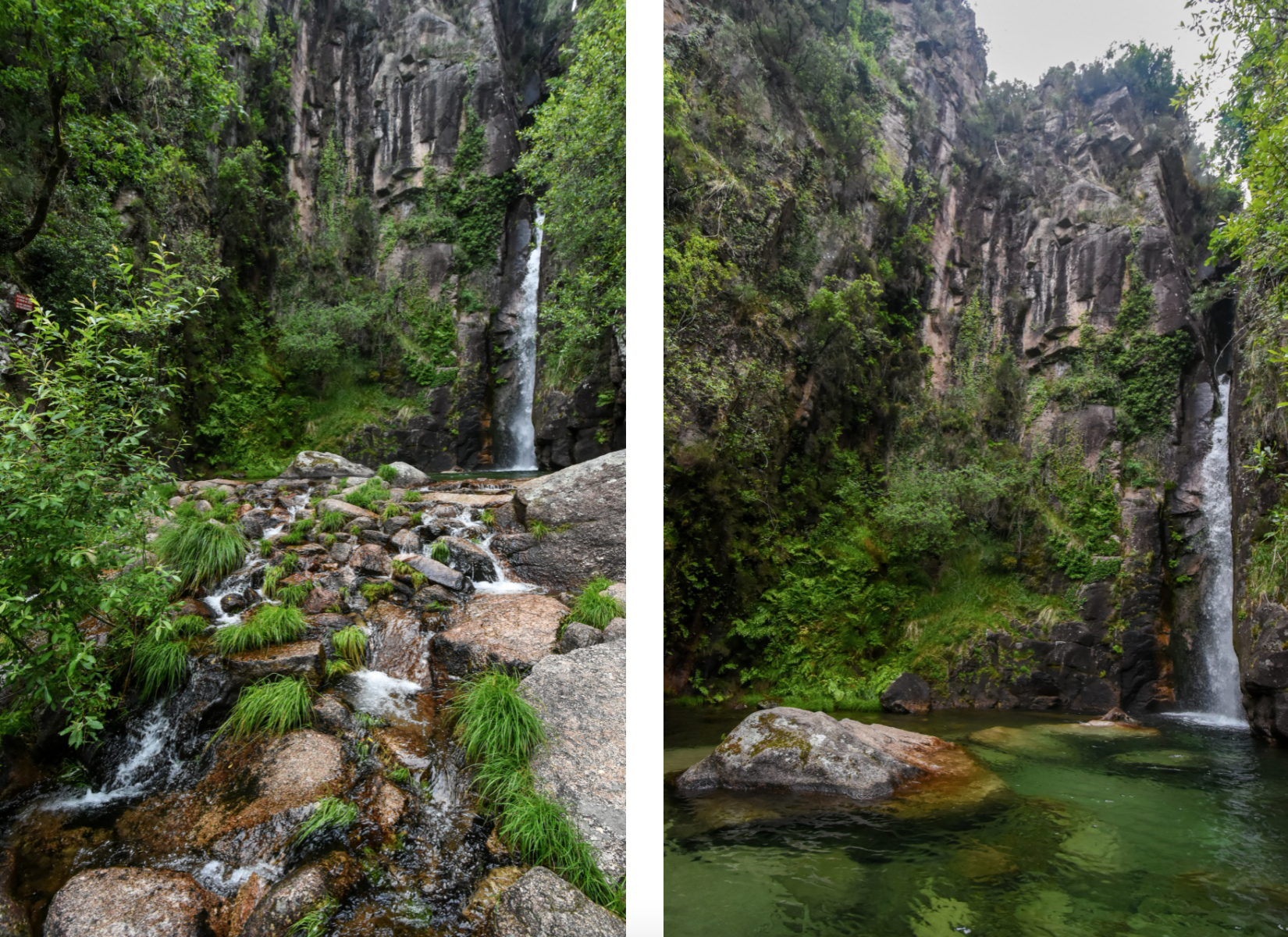 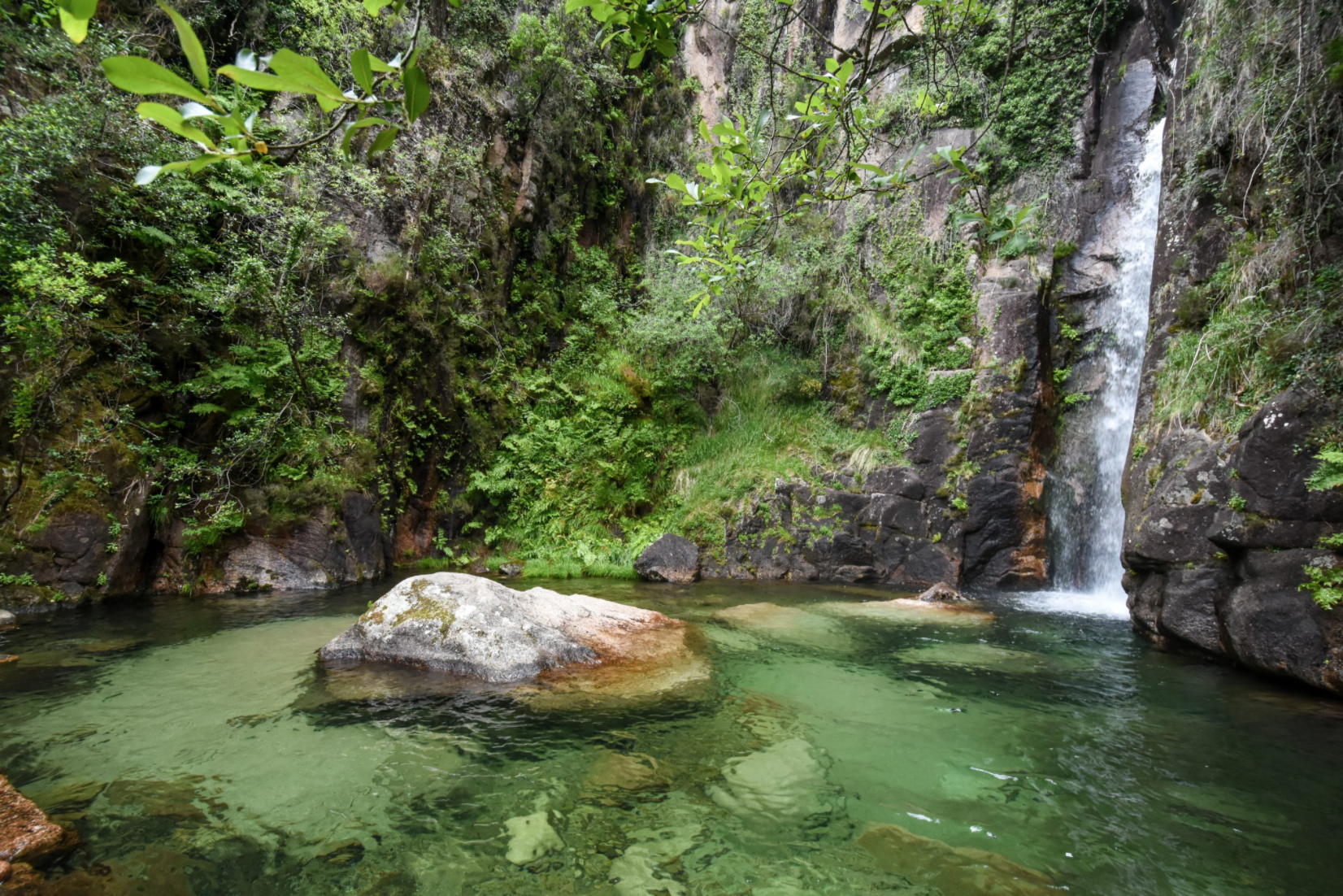 The longest walk of the day was still to come, almost 5km from the village of Xertelo to 7 Lagoas. I’m probably not in the best shape or I’m just not very aware of the distances, because all the walks felt longer than they actually were. Here again, we have to leave the car at the entrance of the village and follow the arrows and markings until 7 Lagoas. The entire hike is very well signposted, so it is impossible to get lost. The entire trail is almost at the same elevation, so it’s pretty easy, especially on a cloudy day, as the shade is non-existent.

Almost arriving to the Lagoas, I was surprised by some puddles in a small valley, visible from the small bridge that goes over this water line and then abruptly falls into a very high waterfall, which we only see a few dozen meters later, when we descend into towards the ponds. These are as beautiful as I imagined, I was only sorry to catch them on a cloudy day, as they were not at their maximum beauty, and the temperature was not conducive to bathing. I’ve been jumping from pond to pond, being impossible to visit the most distant ones, for safety reasons (again I had the whole mountain to myself – Jorge had to stay working – so it was not wise to venture alone through terrains most dangerous). 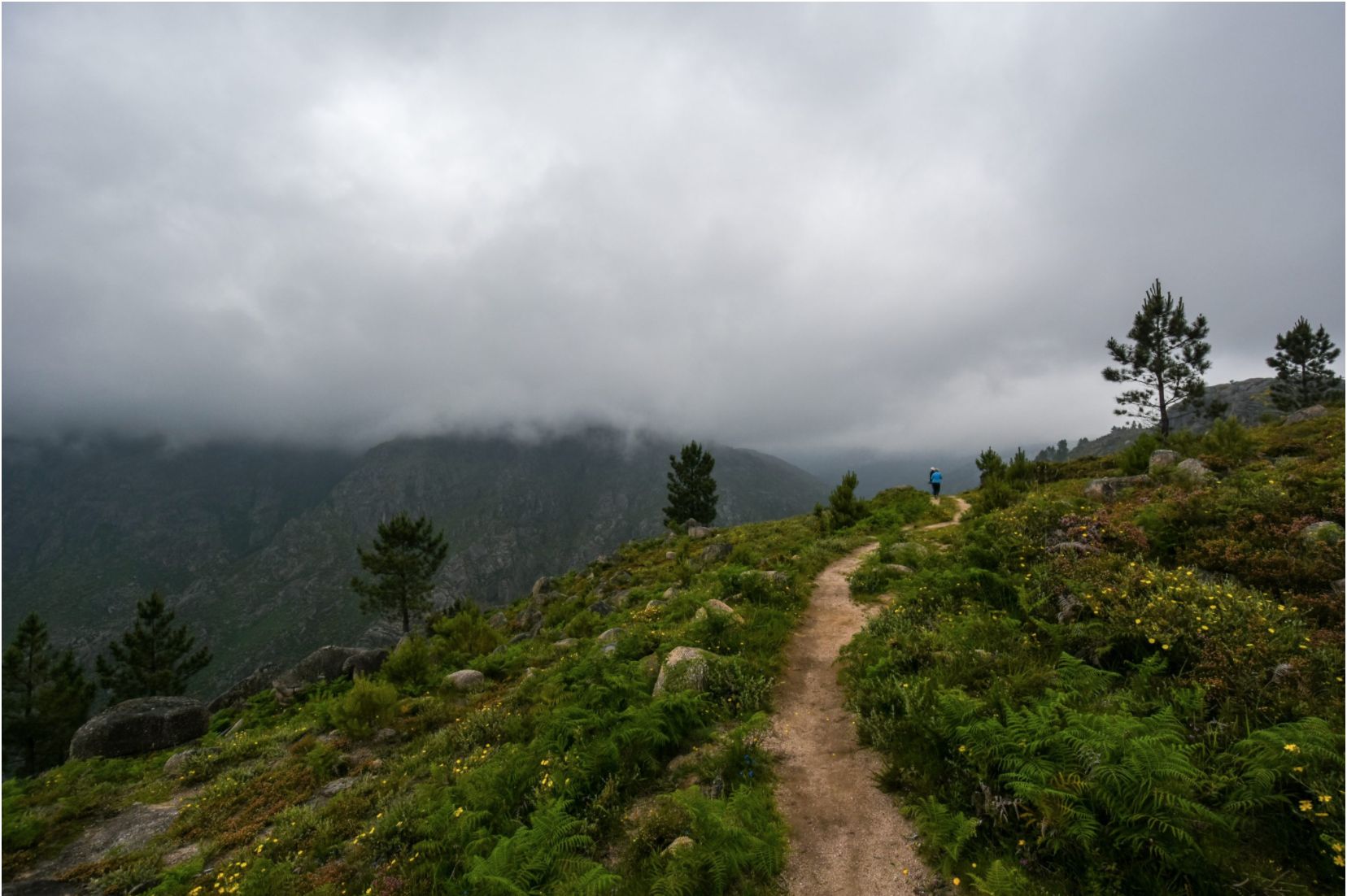 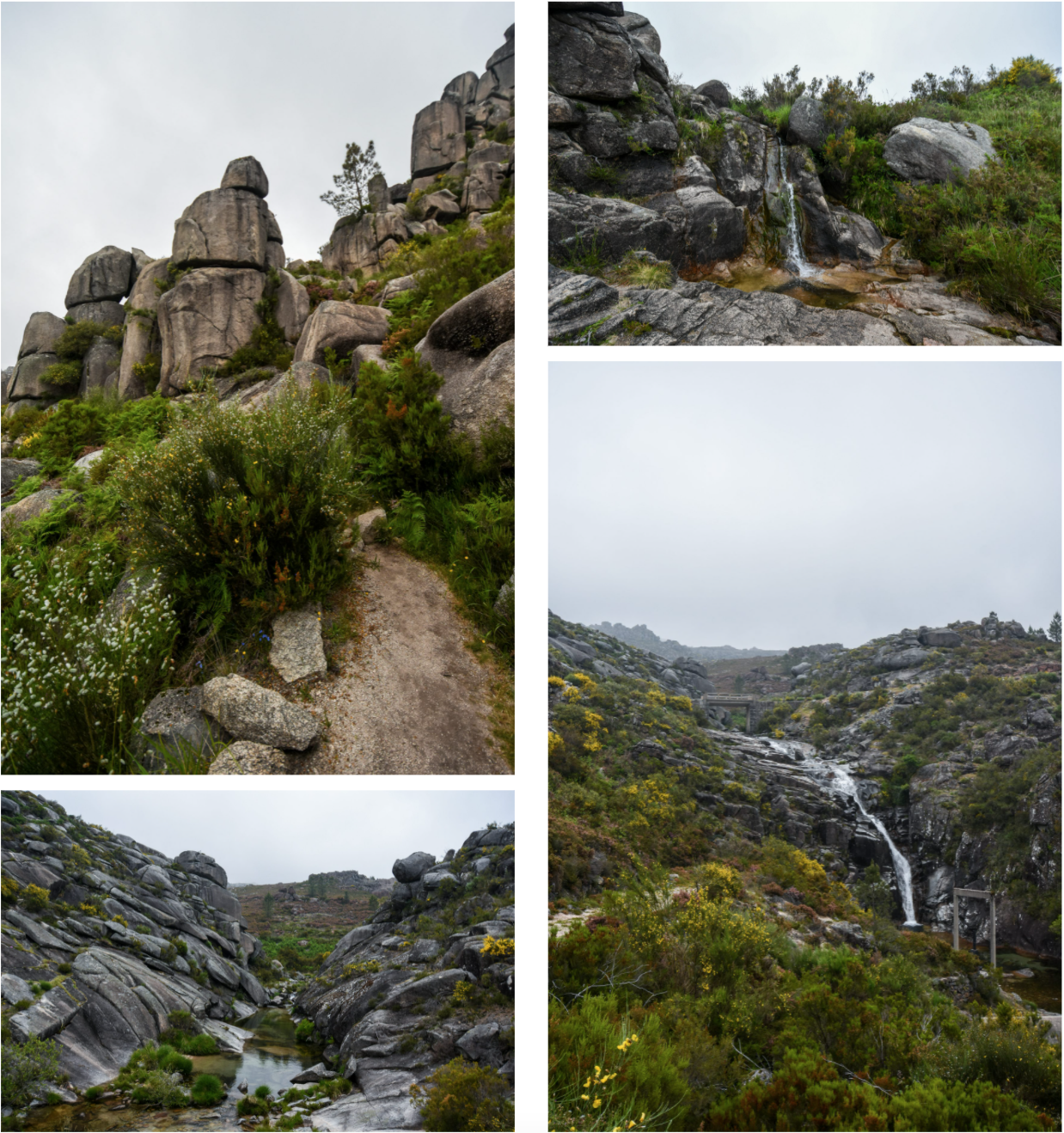 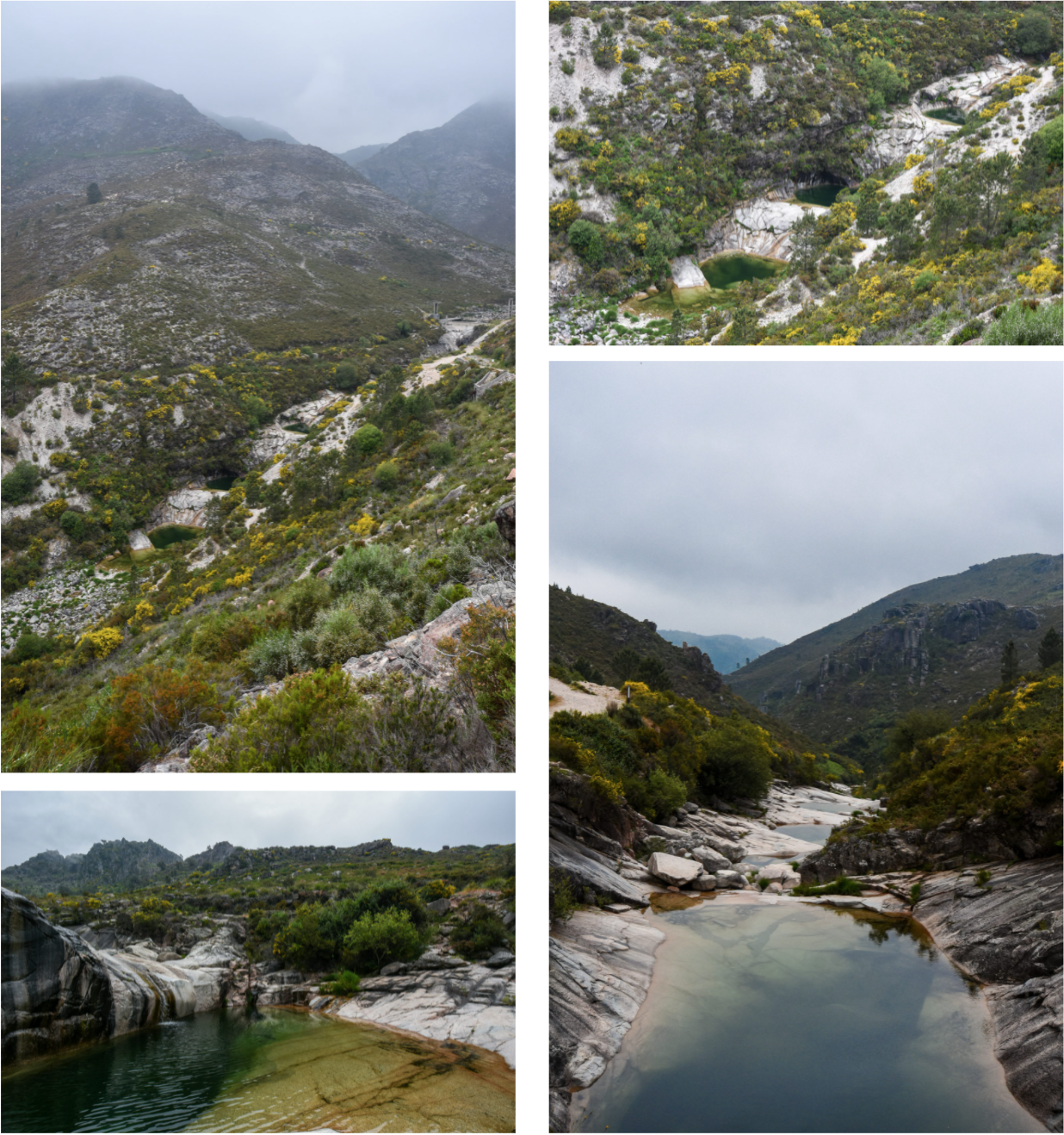 From Xertelo to the village of Gerês, it took almost an hour. I thought about stopping at Ponte da Misarela, but the closest point where it was allowed to leave the car was 1km away and I no longer had the legs to walk one kilometer and another kilometer back, so I had to abort the mission and go straight to Nations Gerês, where Jorge was waiting for me, looking forward to returning to Lourdes Capela Restaurant.

The next day he left early because at 2 pm he had to be in Lisbon. We loved these two days in Gerês and we will definitely return with more time! And you, what did you like most and where do you think we should have gone and didn’t?