For Jorge’s 30th birthday we wanted to do something special! He had already told me that he wanted to go to Disney so we thought it would be the perfect plan! I did an extensive research both to spend one or several days in the parks, including or not a Disney hotel, but unfortunately the prices are so absurdly high that we were happy enough with just one park in just one day.

Prices vary depending on the season and the day of the week (if we had gone on the 17th, Friday, it would cost 56€ per person, a park, as we went on the 18th, Saturday, costs 74€). I would say it is only worthy to buy a ticket for both parks if we spend more than two days in the park, since in one day we are unable to visit even half of the attractions. We chose to visit Disneyland Park and not visit the smaller Walt Disney Studios as the first has more attractions that interested us, although the second is now with a Star Wars special while the first is with a Frozen 2 special, which interested us less (the specials are parades and theaters related to the theme). There is also Disney Village, an area common to both parks and free public access with restaurants, shops and even a cinema, but we didn’t have time to explore. The prices of Disney hotels are unbelievable – prices for one night at the hotel, two days in the park started at around €500 and could easily exceed €1000.

The parks open every day at 10am. Unfortunately, we were a little late leaving home and we only got there at 10:30. We were only inside the park at around 11am, as we have to pass two huge lines to enter, the first the security barrier, the second the turnstiles to enter the chosen park (and if you haven’t bought the ticket online, you still have to go to the ticket office queue (which is not big).

There is a very good app of the park that shows us in real time the waiting times for each attraction, the average prices of each restaurant, the location of the bathrooms, etc. All tickets come with the FastPASS option where we can “get a ticket” for the most important attractions. The only problem is that you can only take a second ticket when the first one is in use – I explain: as soon as we entered we took a ticket for Hyperspace Mountain roller coaster. It was 11am and the ticket was for 1.35pm – 2.05pm which meant that it was only after 13h35 that we could get a new ticket for another attraction. Between 11am and 1.35pm we could go and do whatever we wanted and at the indicated time we could go to the special FastPASS entrance and get in much faster. The problem is that as there are too many people in the park and everyone has FastPass, tickets run out quickly. So when we tried to get the third attraction ticket, at 3:25pm, there were no tickets for anything else!

So let’s tell you how our day went: We crossed Main Street USA, the main street of shops and restaurants that leads to the center of the park where Cinderella’s Castle is. While we waited for the time to go to Hyperspace Mountain, in Discoveryland (the Star Wars area mostly, because the attraction of Buzz Lightyear is being recovered) we saw that one of the nearest attractions and that had a shorter wait time (25min) was to meet Darth Vader. The problem is that it was actually a 60min waiting line, which made us suspicious of all the waiting times that the app was indicating! And Darth Vader speaks French, which immediately made it a bit weird xD After this there was no time to go to any other attraction queue so we went to explore Fantasyland, the area where most of children attractions are located – Dumbo the Flying Elephant, Mad Hatter’s Tea Cups, Alice’s Curious Labyrinth, etc. 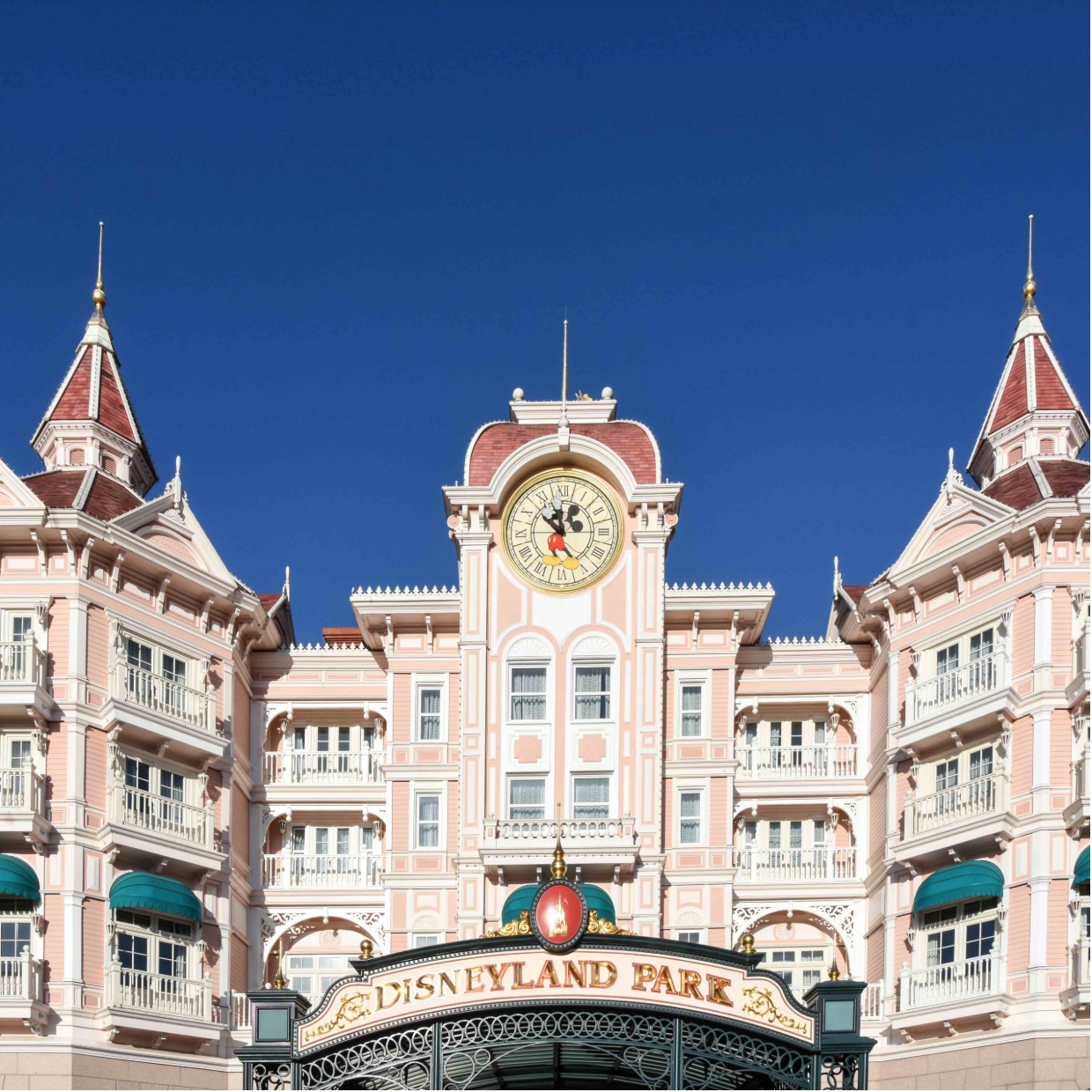 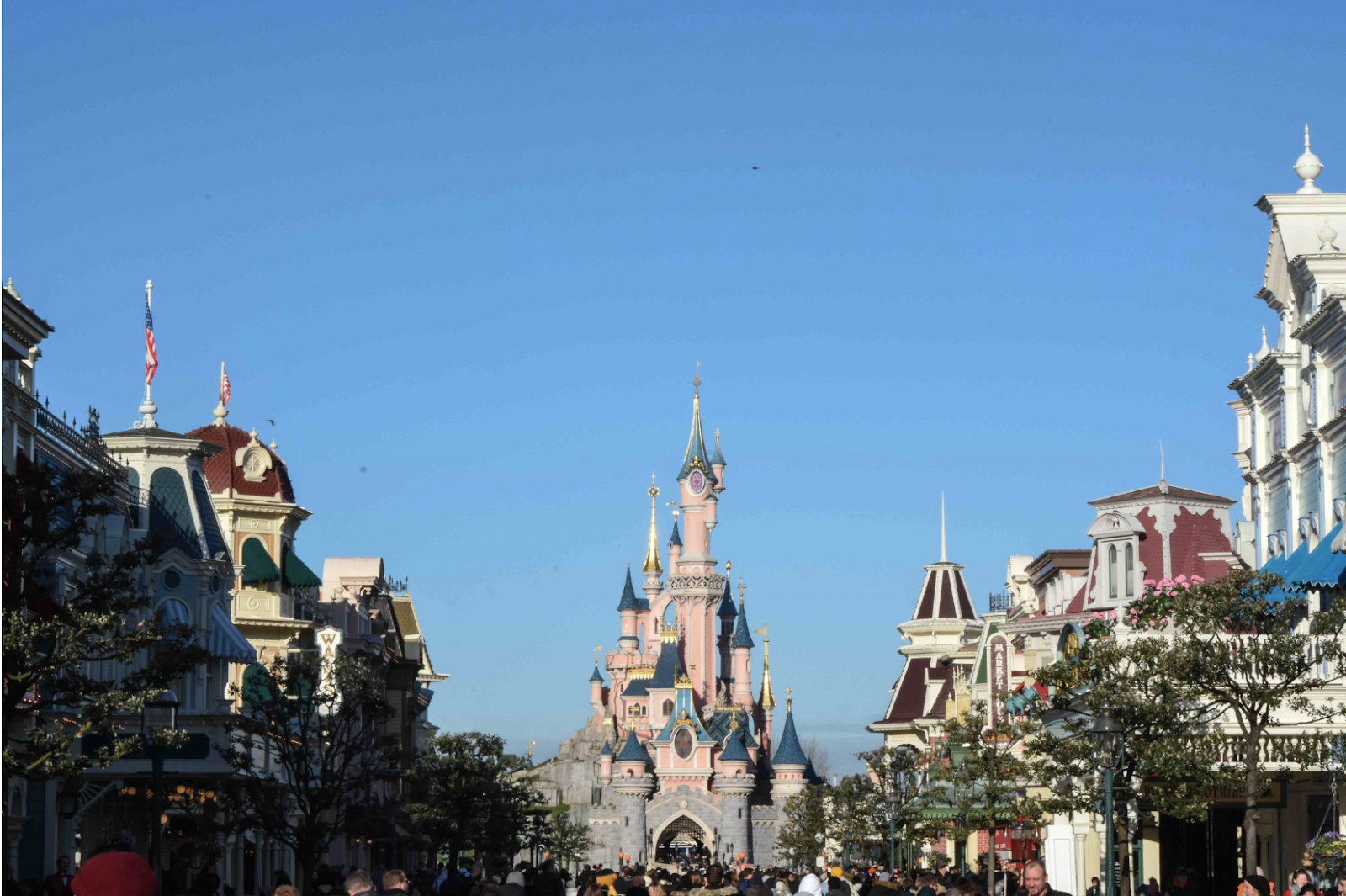 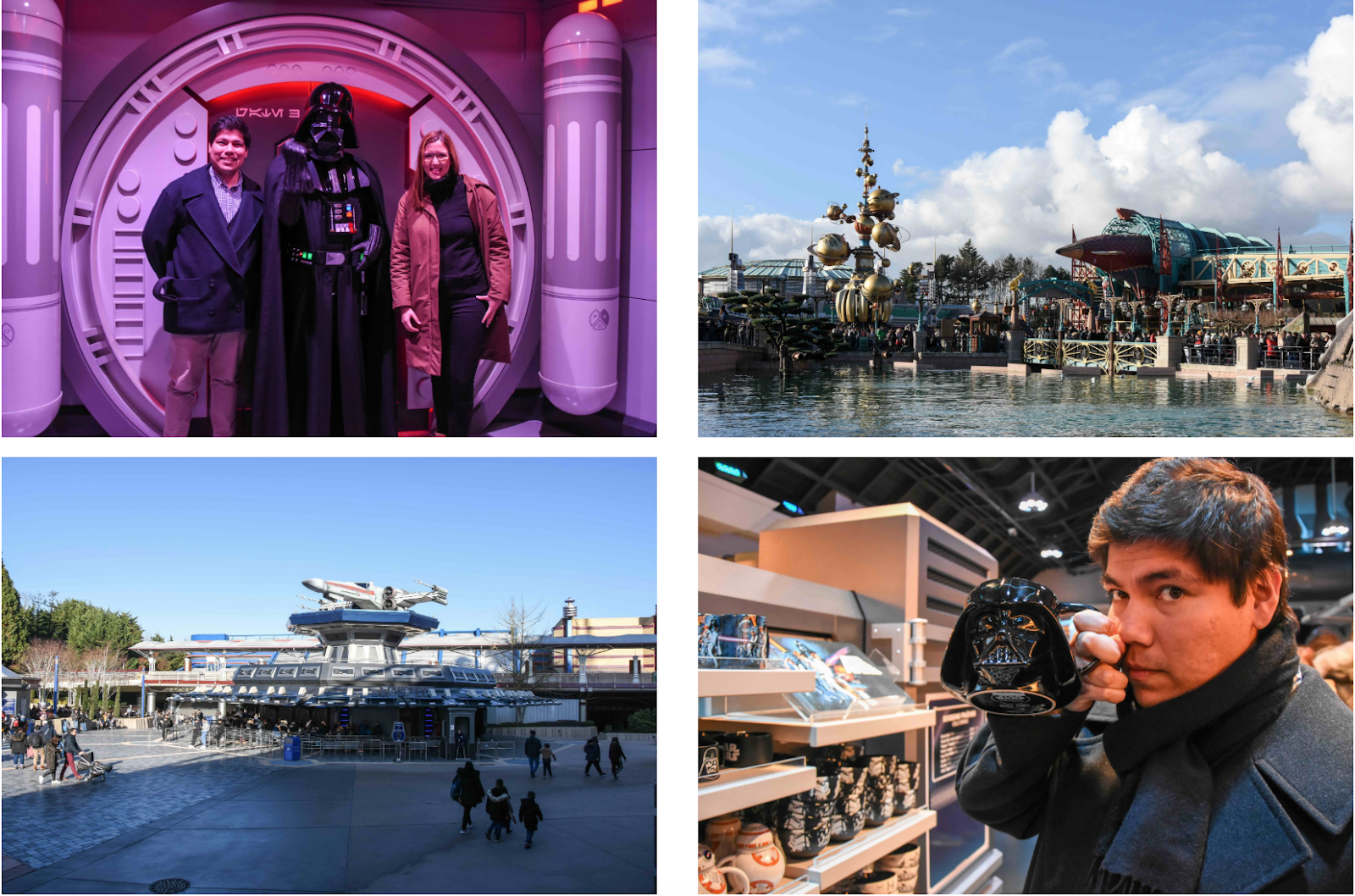 After riding the incredible roller coaster called Hyperspace Mountain, we quickly visited Captain Nemo’s Nautilus submarine, which had no queue. It was already 2:00pm and we had a ticket for Star Tour, also from Star Wars, at 3:25pm. So it was time to find a restaurant and have lunch (there is also the option of bringing some food from home as the restaurants also have lines and you still lose about an hour to eat, in addition to not being cheap). The central square was full because in a few moments there was going to be a Frozen show. We then went to Adventure Land where we quickly passed by Agrabah (it is amazing how with music and architecture they can make us really feel in the places and easily forget that immediately before we were in a galaxy far, far away). We chose to have lunch at Hakuna Matata, as big Lion King fans, which has a terrace overlooking the Robinson Chalet (I still haven’t figured out who these are, but they live in a tree) and the Pirate Galleon. We preferred to eat inside as Paris in January is quite cold.

Before we went on the Star Tour, we tried to get a ticket for Big Thunder Mountain, a roller coaster in Frontierland (the western zone), and after discovering that there were no FastPasses left, I went running to Indiana Jones roller coaster and saw the last ticket going away two girls in front of me… We then went on the Star Tour quite unmotivated with the idea that from now on we would really have to go to the giant lines.

Star Tour is one of those 4D cinemas, in which the chairs move. We are inside a ship with R2D2 and CP3O piloting and it would be even nicer if the video had at least subtitles, because my French was only enough to understand half of the story … After this we watched Disney Stars on Parade show – I imagine this is a good time for those who have no interest in the parade to go to the queues. For me it was one of the best things of the day! 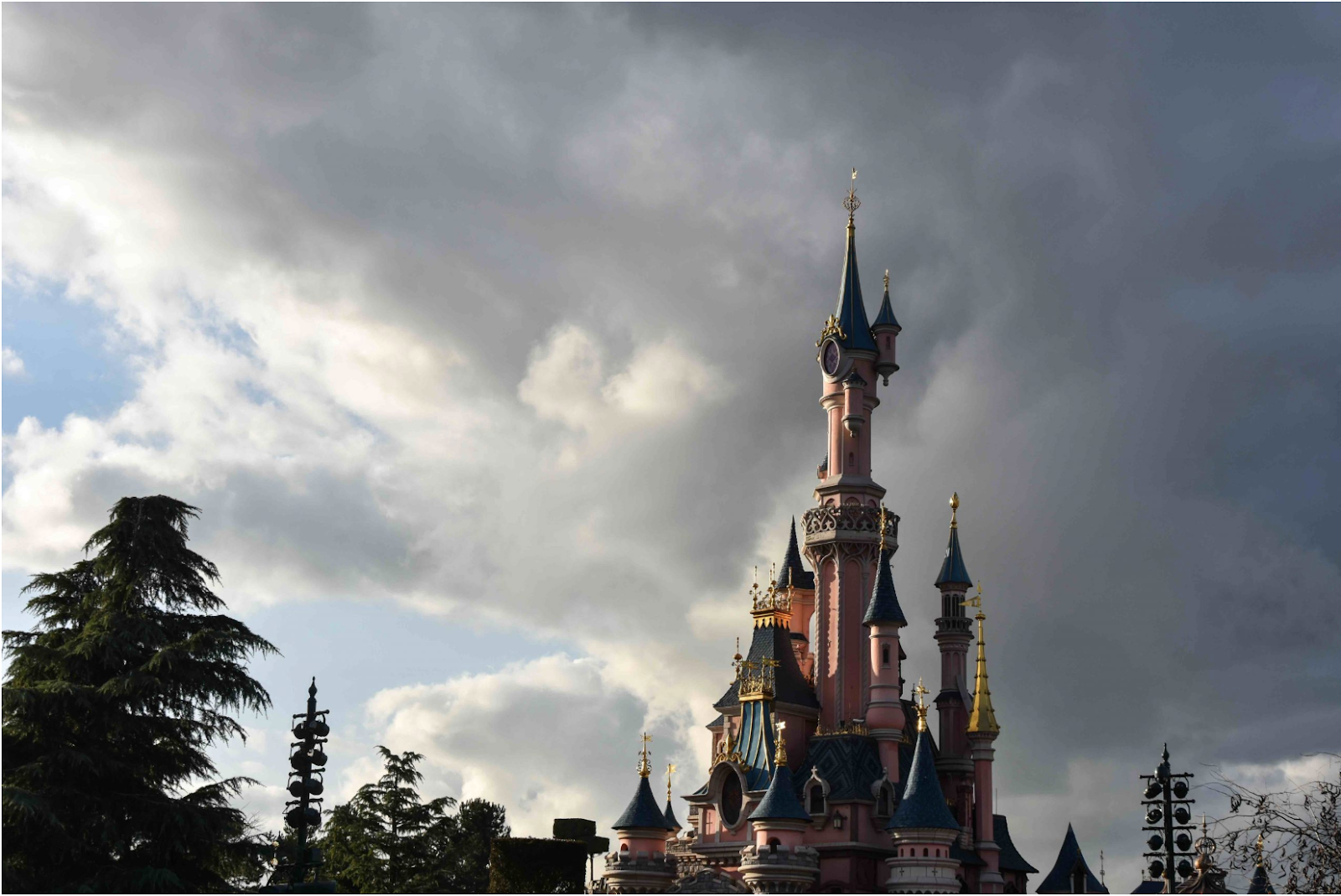 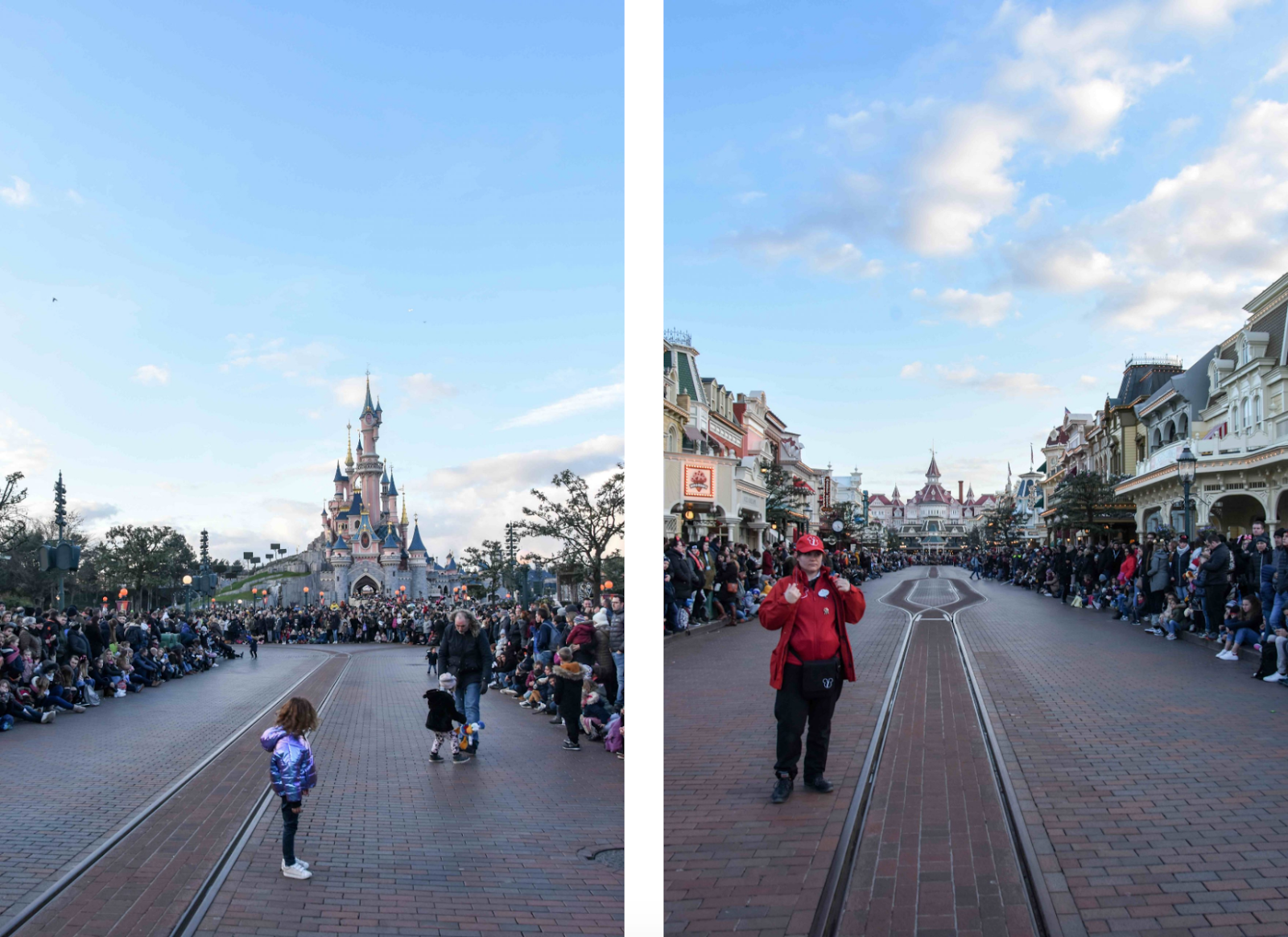 After the parade the attractions were all completely full. 100min waiting time for Big Thunder Mountain and Peter Pan’s Flight, 60min waiting for Indiana Jones and Temple of Peril or the Pirates of the Caribbean… It was 5pm and the park was closing at 6:30pm (or so I thought, I’ll explain soon) with the big fireworks and the video mapping at Cinderella’s Castle, so I didn’t want to spend the rest of the time in a queue or risk not seeing the fireworks because of that. So we decided to stroll through the park, explore the Adventureland caves, climb up to the Robinson’s Chalet on Adventure Isle, enter Cinderella’s Castle and see some of the shops.

At 6:30pm we were close to the exit, overlooking the Castle. The plan was to see the fire from afar and be one of the first to leave avoiding everyone leaving at the same time. I found it strange not to see a crowd at the foot of the Castle. And when the clock arrived at 6:40pm and nothing had happened yet, I checked the app again… Because on Saturday the park closes at 8:00pm… but the app only lets you see the time of the day itself and the day before when I checked it said, and well, because it was Friday, that was closing at 6:30pm … We were in doubt if we should leave or if should stay a while longer. I suddenly saw that the attractions that were still open no longer had absurd waiting times. Indiana Jones roller coaster was only 20 minutes away, so we went running there and it was amazing! Dumbo’s waiting time was 0min but when we got there it was closing and they wouldn’t let us in. Half the park was already closed, so we were forced to take a big detour… and pass Pirates of the Caribbean. We went in and after about 3 minutes just going through the entire area destined for endless lines, we went directly in the boats and had one of the most amazing experiences (see the stories on Instagram). These last two attractions ended up making the day worth it!

Unfortunately we were unable to stay for the fireworks because we were having dinner with friends in the center of Paris to celebrate Jorge’s birthday and we chose to leave 10 minutes before the park closes to avoid the crowd. I may come back one day and see it! 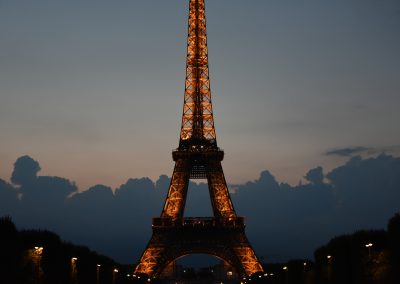