Every month we can request TAP to do a certain flight based on a scoring system – each month they give us 6 points and for each asked destination they give us they take us out 16 points, something exaggerated … So and because I like to choose where I fly, I always have few points, which makes my hypothesis of receiving the flight more difficult, since it is in order of punctuation. For Christmas and New Year’s Eve, the company opened special requests, a kind of volunteering in which they did not take points out. I immediately took the opportunity to ask for a layover in Abidjan, the last Africa missing to visit with TAP, with no great expectations because there were many people in front of me with the same request.

This way I got astonished when the planning came out and they had assigned me the layover in Ivory Coast! Expectations for New Year’s Eve were not high, as the flight would arrive to Abidjan at 11:15 p.m., so if we wouldn’t spend midnight inside the plane, it would not be too far either. It was precisely outside the airport, already at a temperature of 27ºC, that we opened the sparkling wine and ate raisins, along with the driver who was going to take us to the hotel. The fireworks exploded disorganized all over town and lasted for hours. In fact, when we arrived at the hotel reception, already at 00:20, we were confused to see a deserted party, but then the hotel staff explained that they were all watching the fireworks in the upper floors. Between portuguese Christmas desserts that the captain’s wife brought and dancing to African rhythms we entered 2019.

We woke up early as we had over an hour way ahead to go to the beach in Assouindé. The captain, who knew the area well, proposed us, even before we went to Ivory Coast, to rent rooms in a small hotel on the beach, a program that the entire crew said yes to. Still in Abidjan I finally had an idea of ​​the city, now illuminated by the sunlight. I decided to open the window to take some pictures and the smell of the fireworks from the previous night was super intense.

We then left for Assouindé, in a less chaotic traffic than is expected of Africa, and my camera in hand: 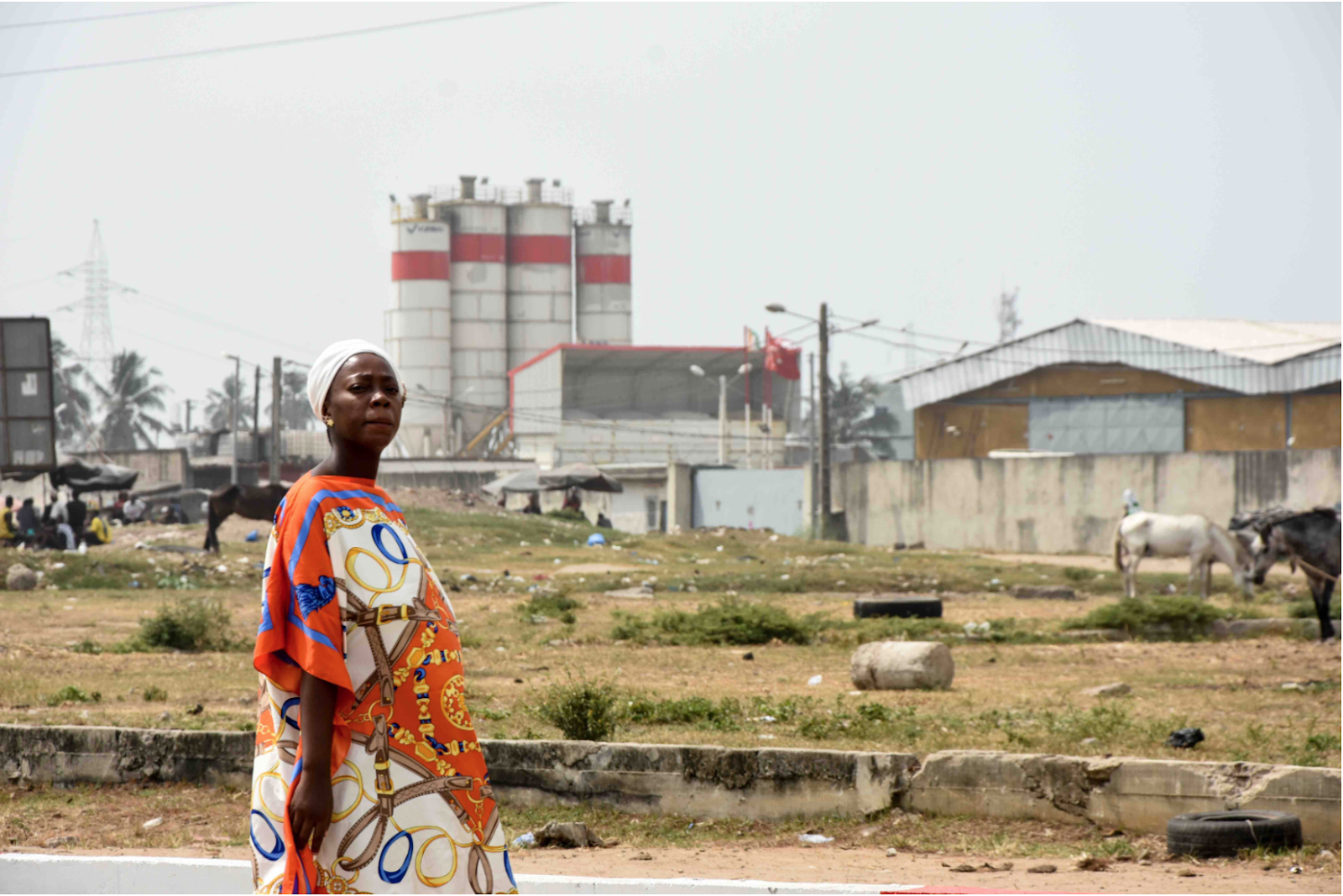 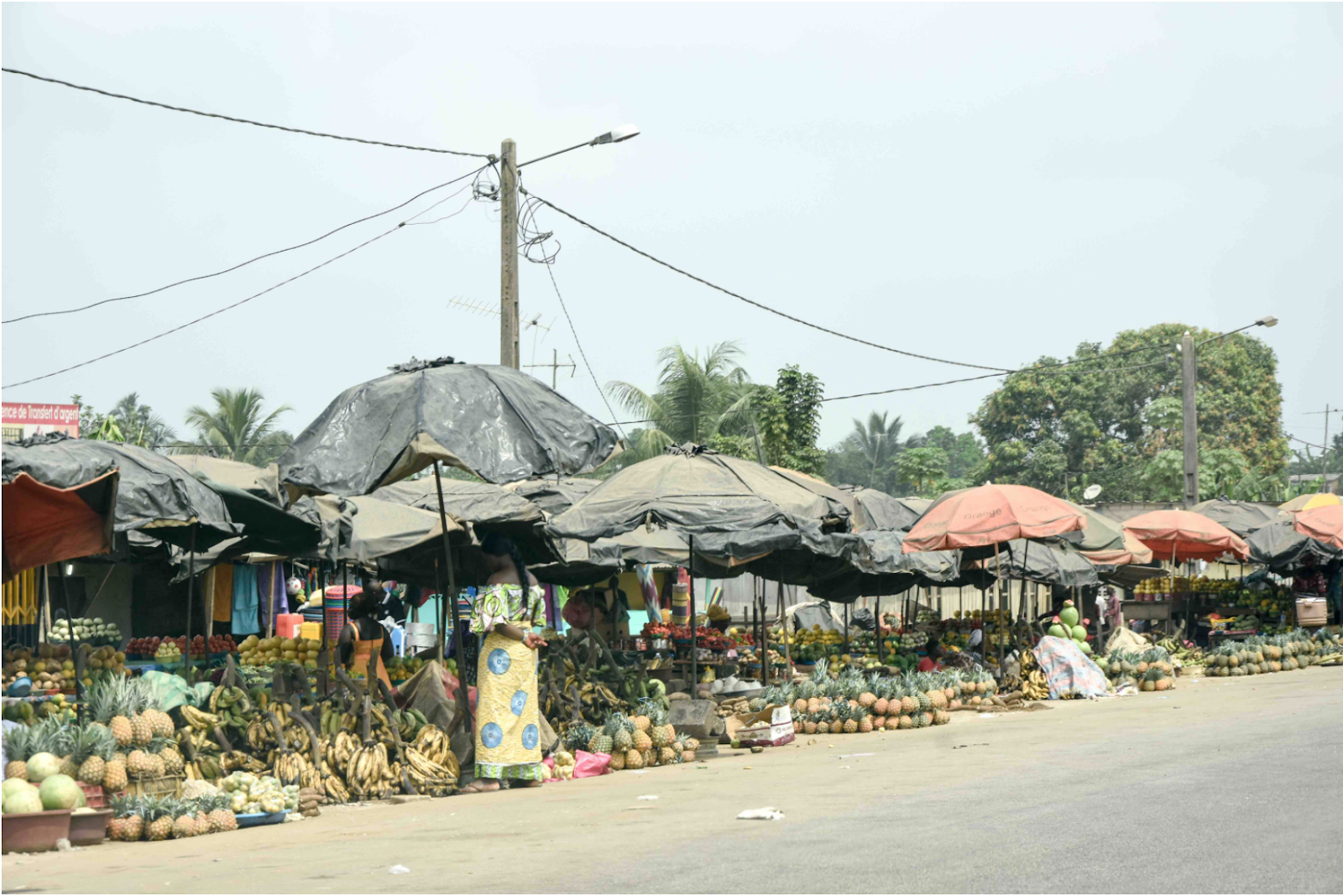 We arrived at Hotel l’Ocean, wanting really bad to take a dip because the cars we drove from Abidjan had no air conditioning. But before that we made the request of what we wanted for lunch, as in Africa things take time, fish and seafood of the freshest there is!

According to the captain he had never seen the beach and the hotel so full, a result of the season. The water of the sea is clear and at a marvelous temperature, that middle term in which one enters without saying ai or ui, but at the same time refreshing. In the beach children to adults were passing, many mothers with babies on their backs, selling peanuts, cashews, coconut water, ananas, handicrafts … obviously my favorite motif to photograph. From time to time tourists and locals passed by on horsebacks or 4 wheels motorcycles, the two activities that one could pay to do on the beach. More ahead in the day we decided to go for a walk to find out what else we would find in that sand tongue and found fishing boats, chickens and more or less charming hotels.

The sun betrayed us when it decided to shyly set behind a haze on the horizon, instead of in the sea, in all its splendor of orange and pink tones … 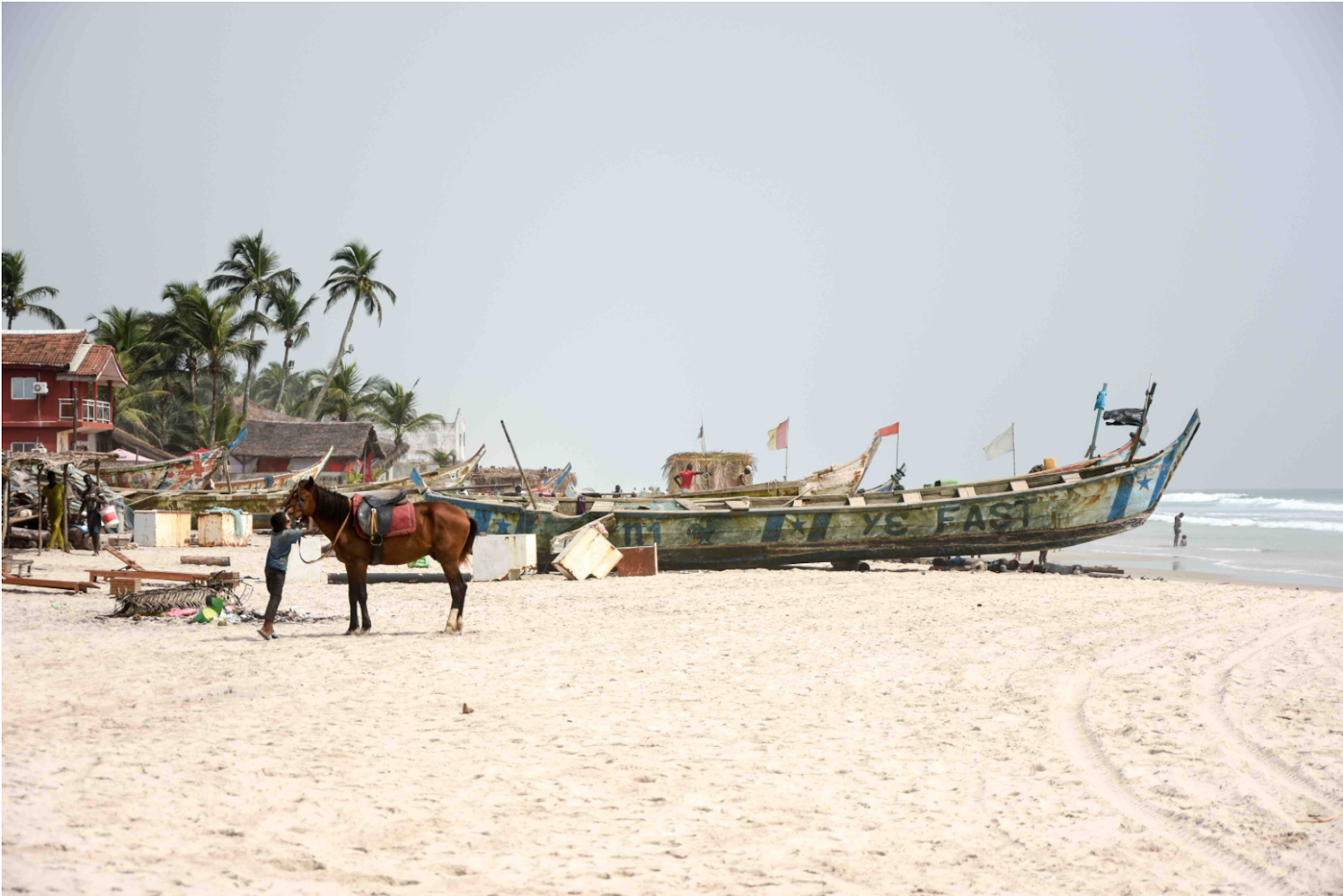 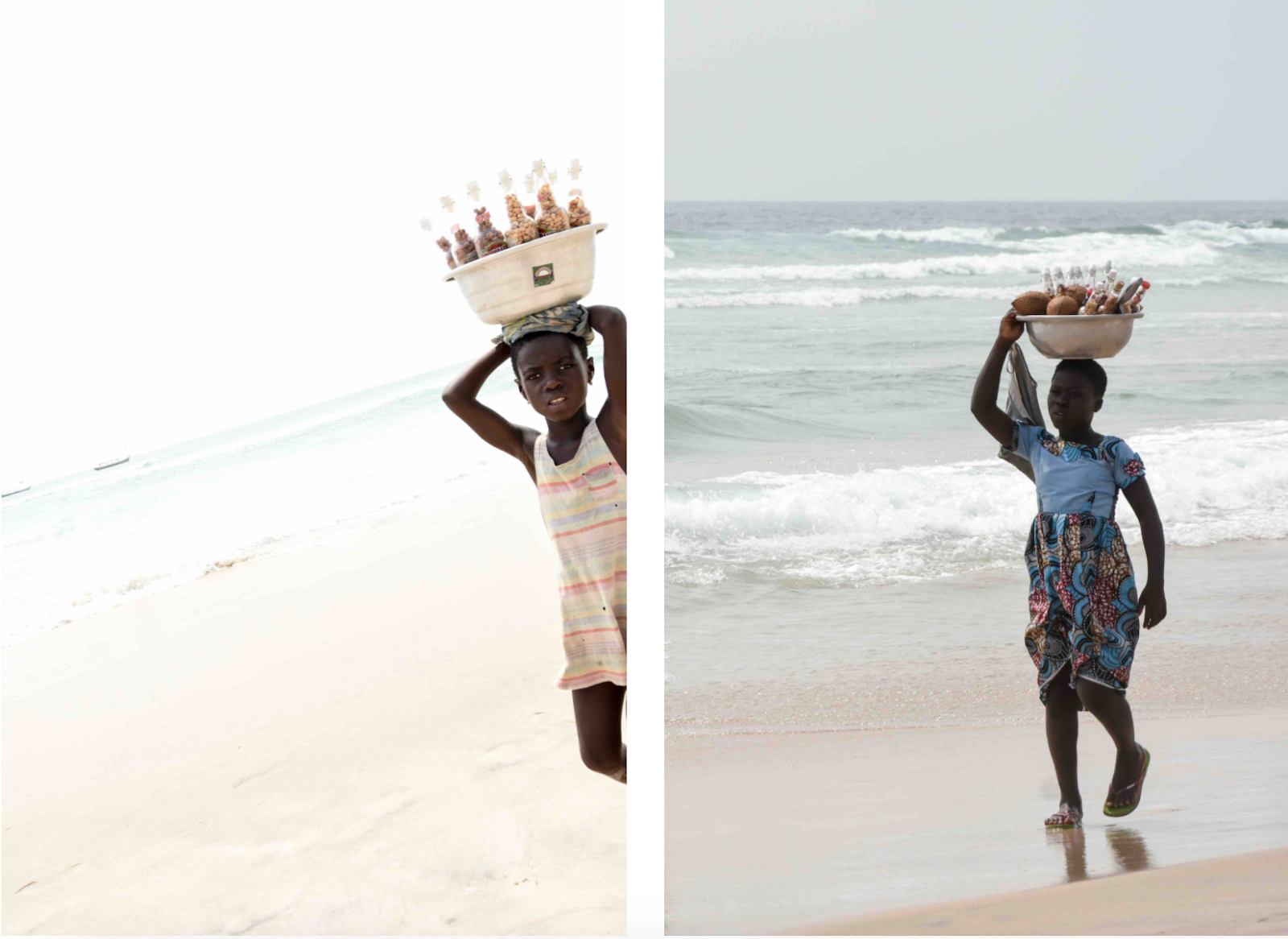 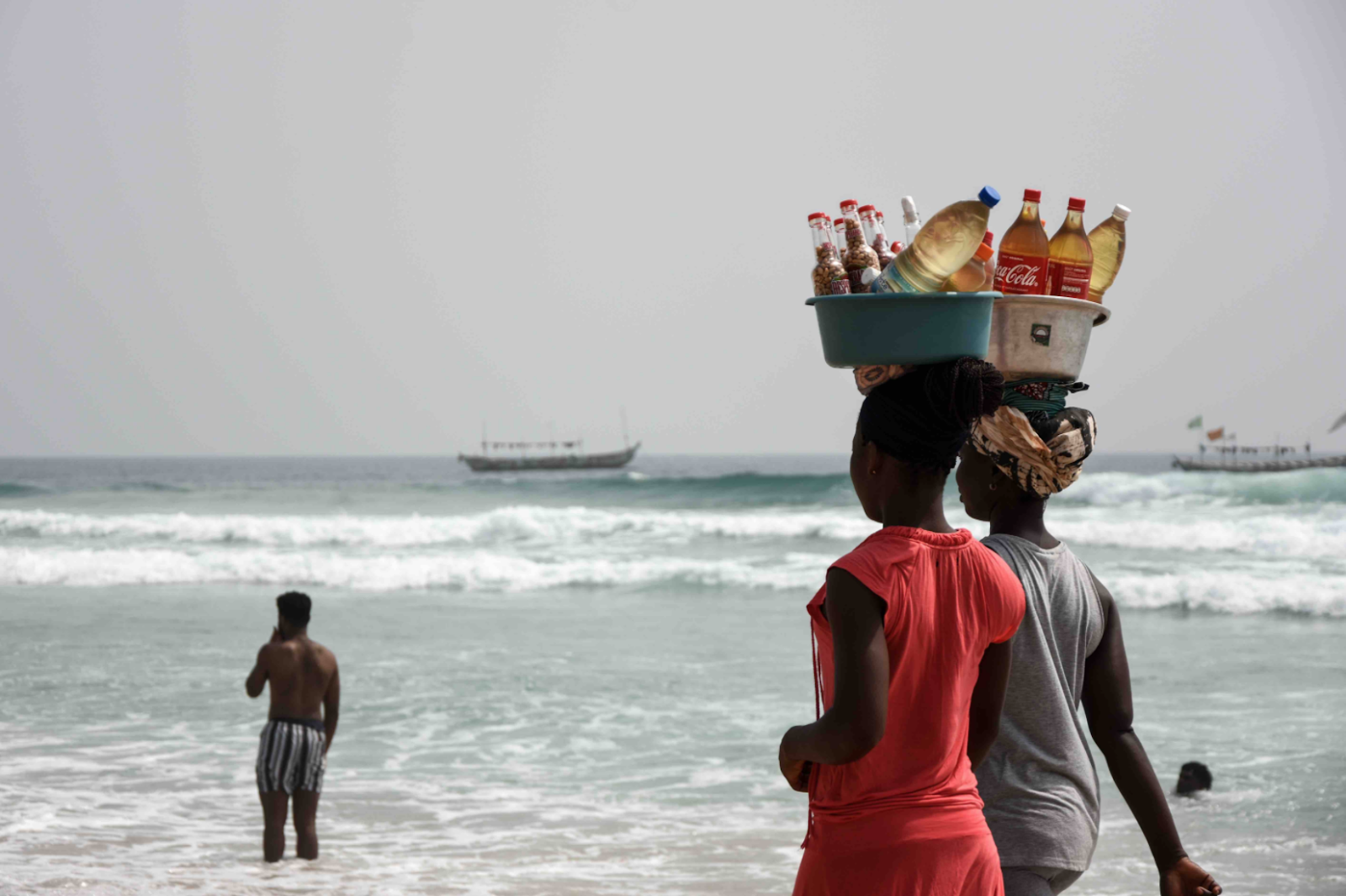 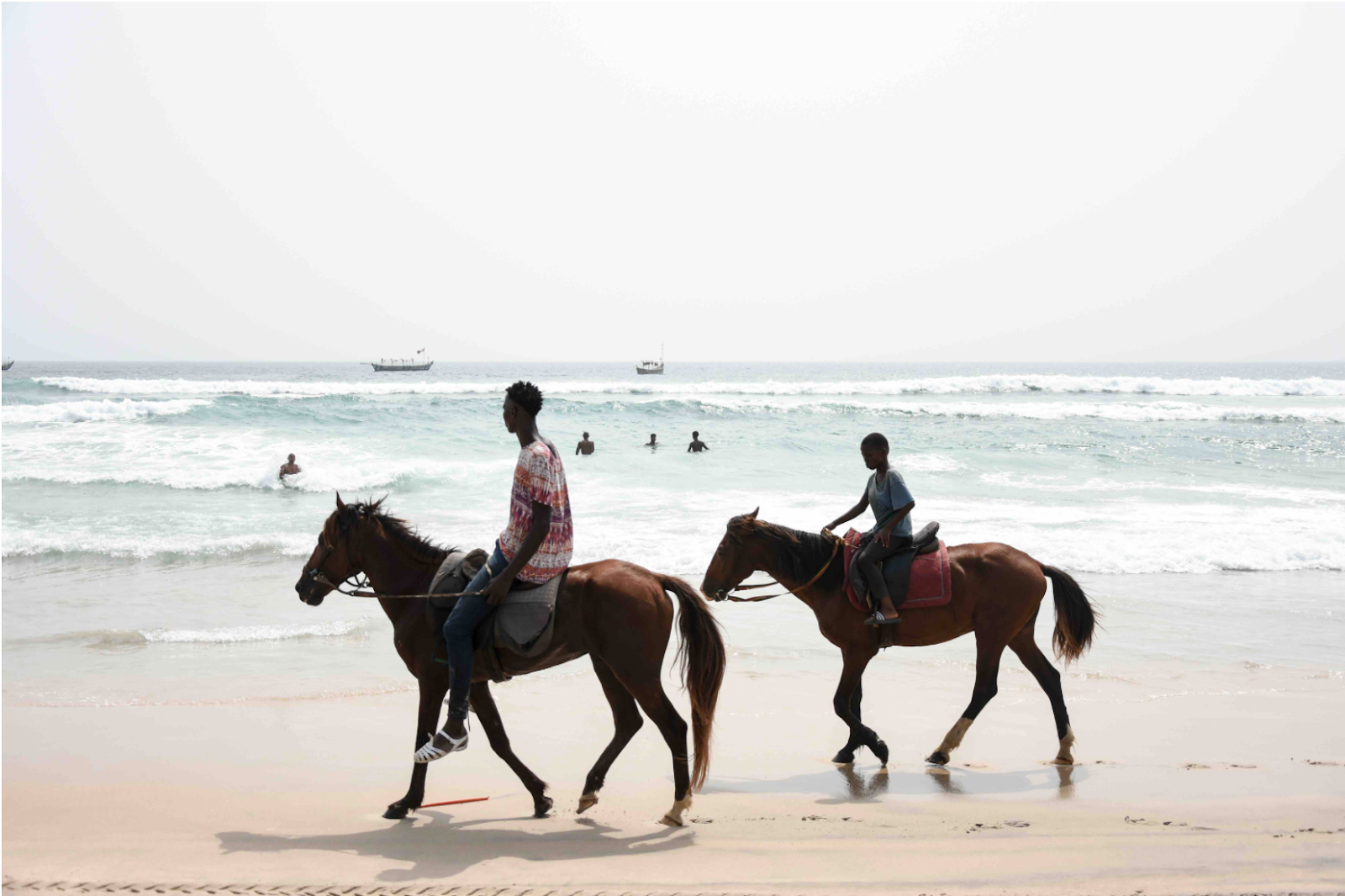 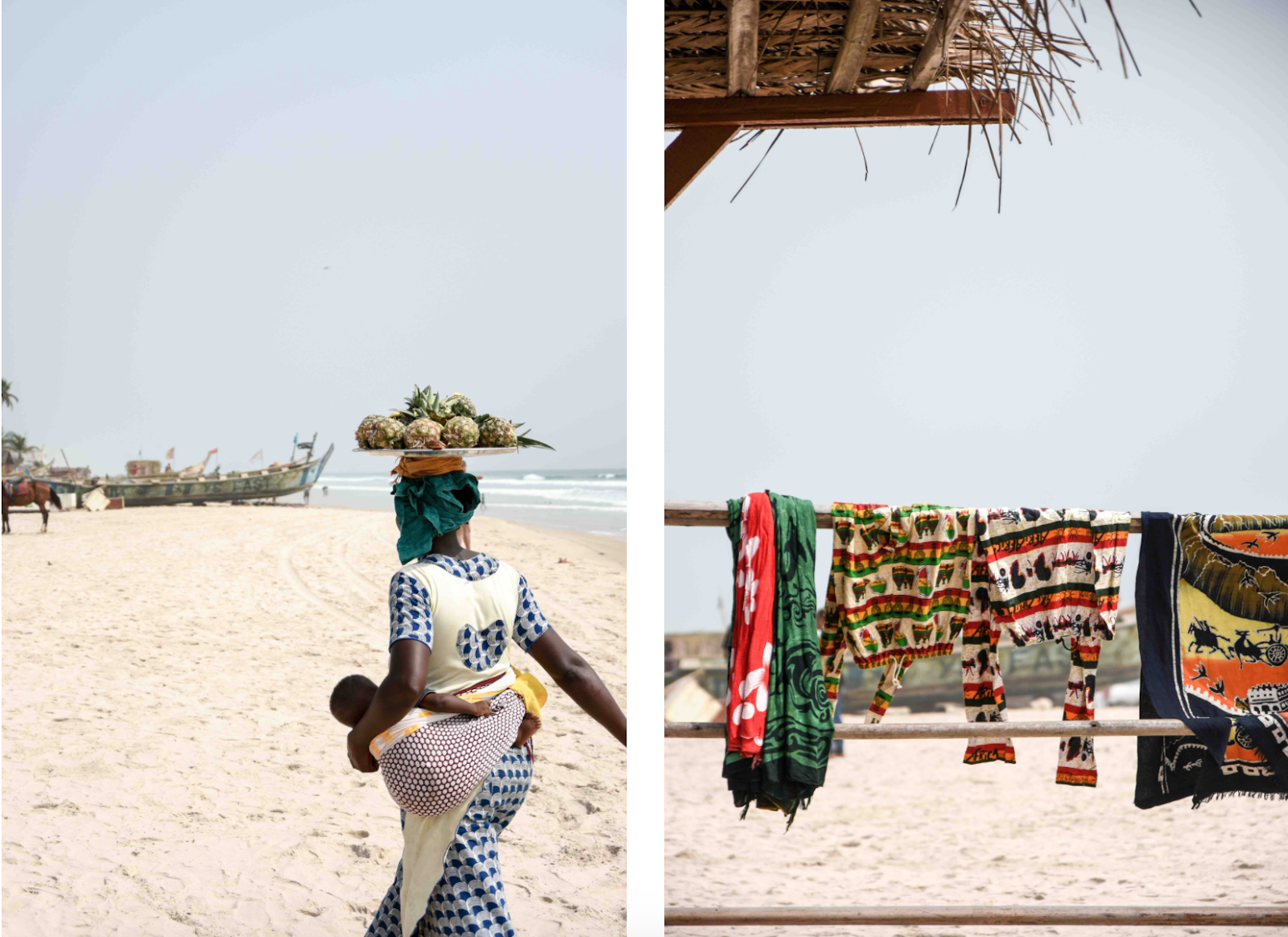 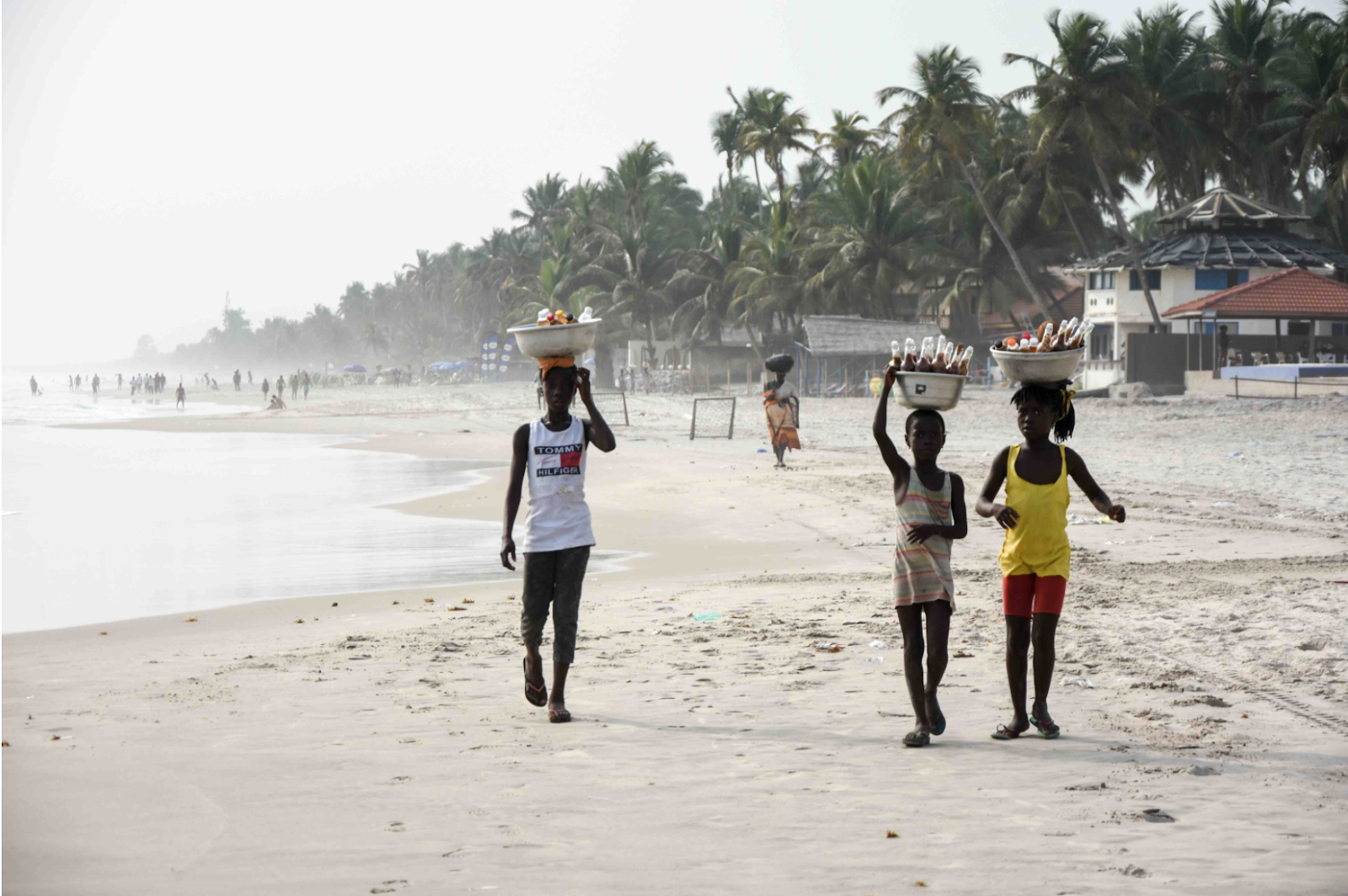 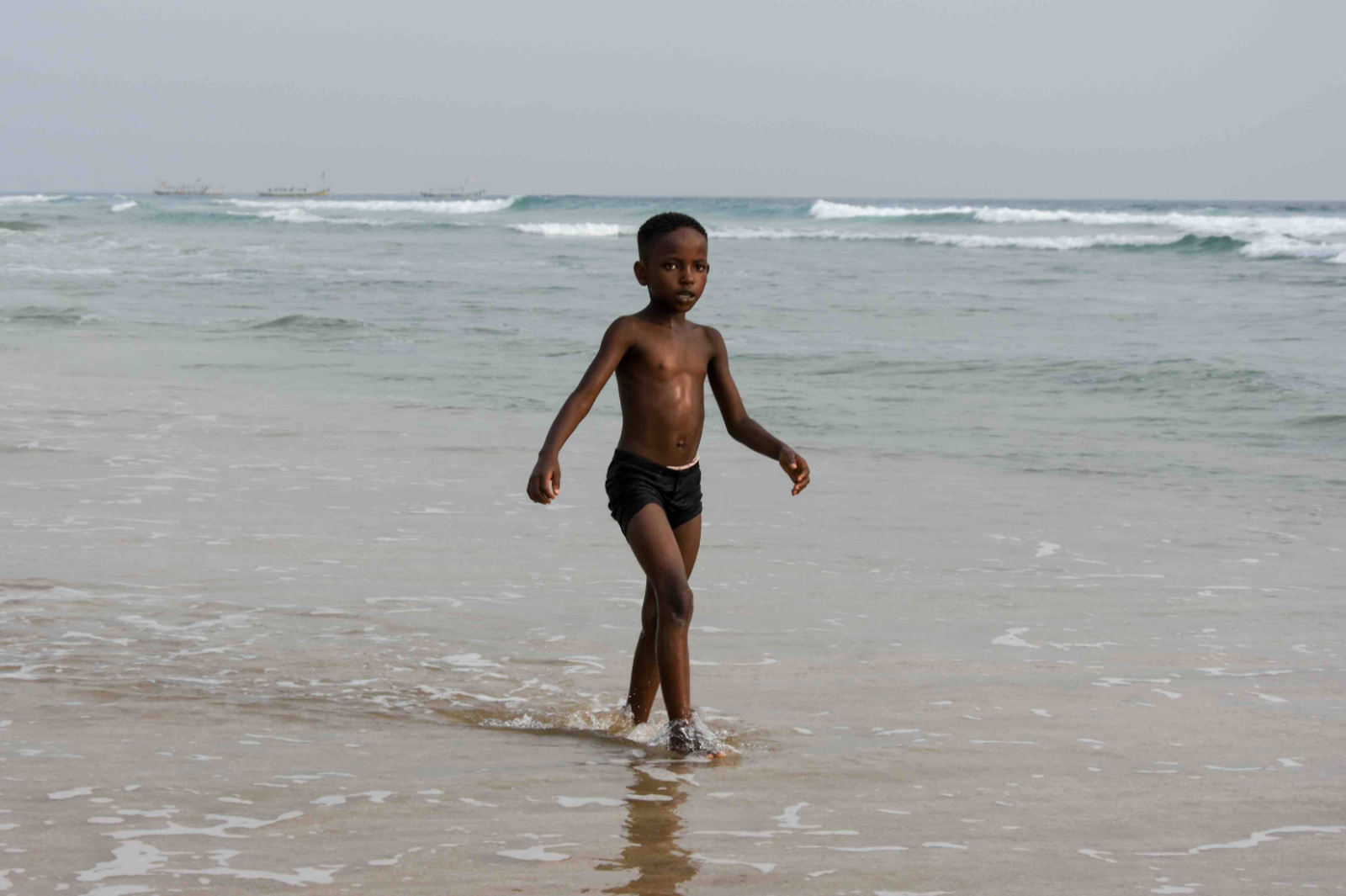 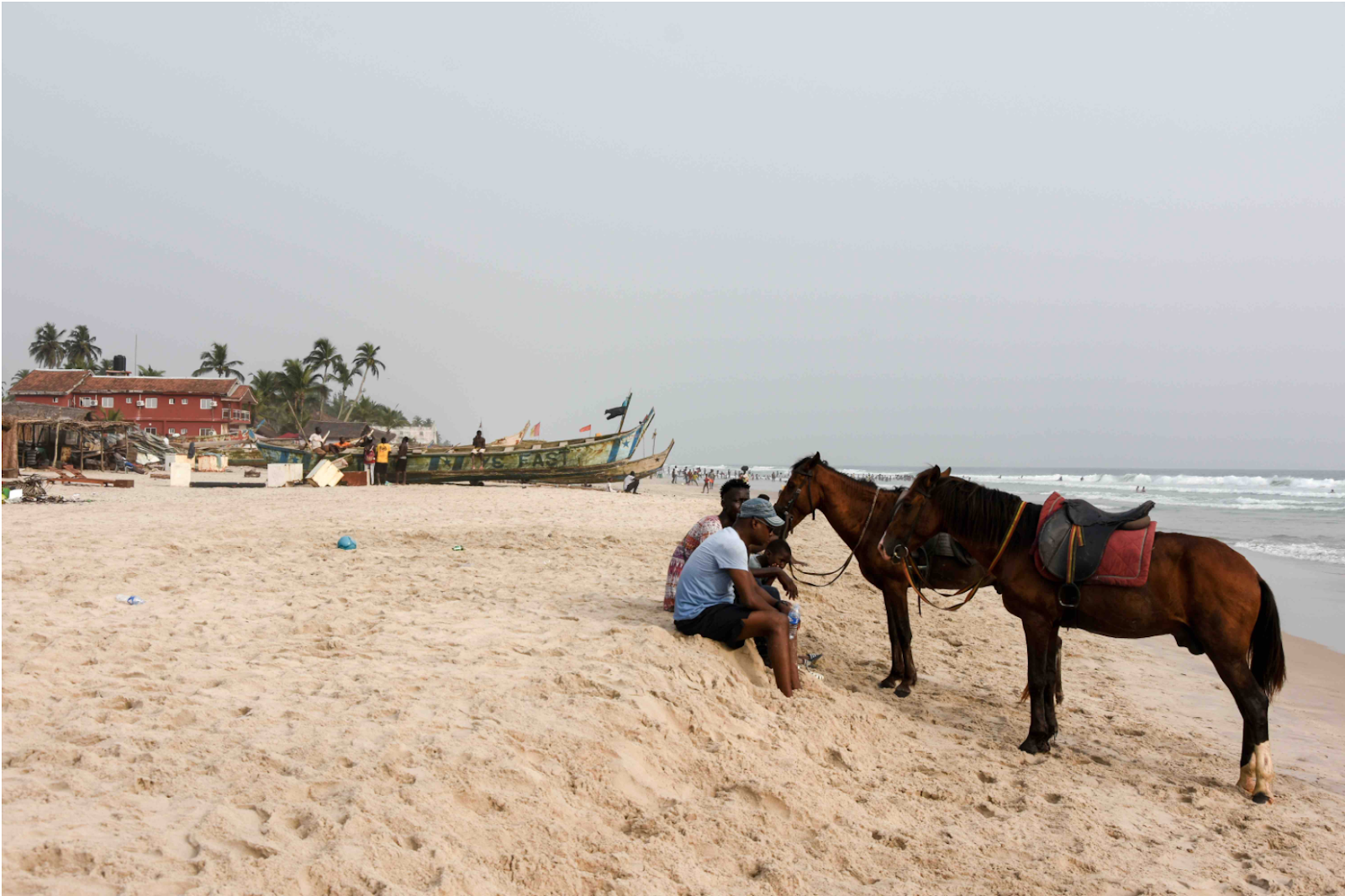 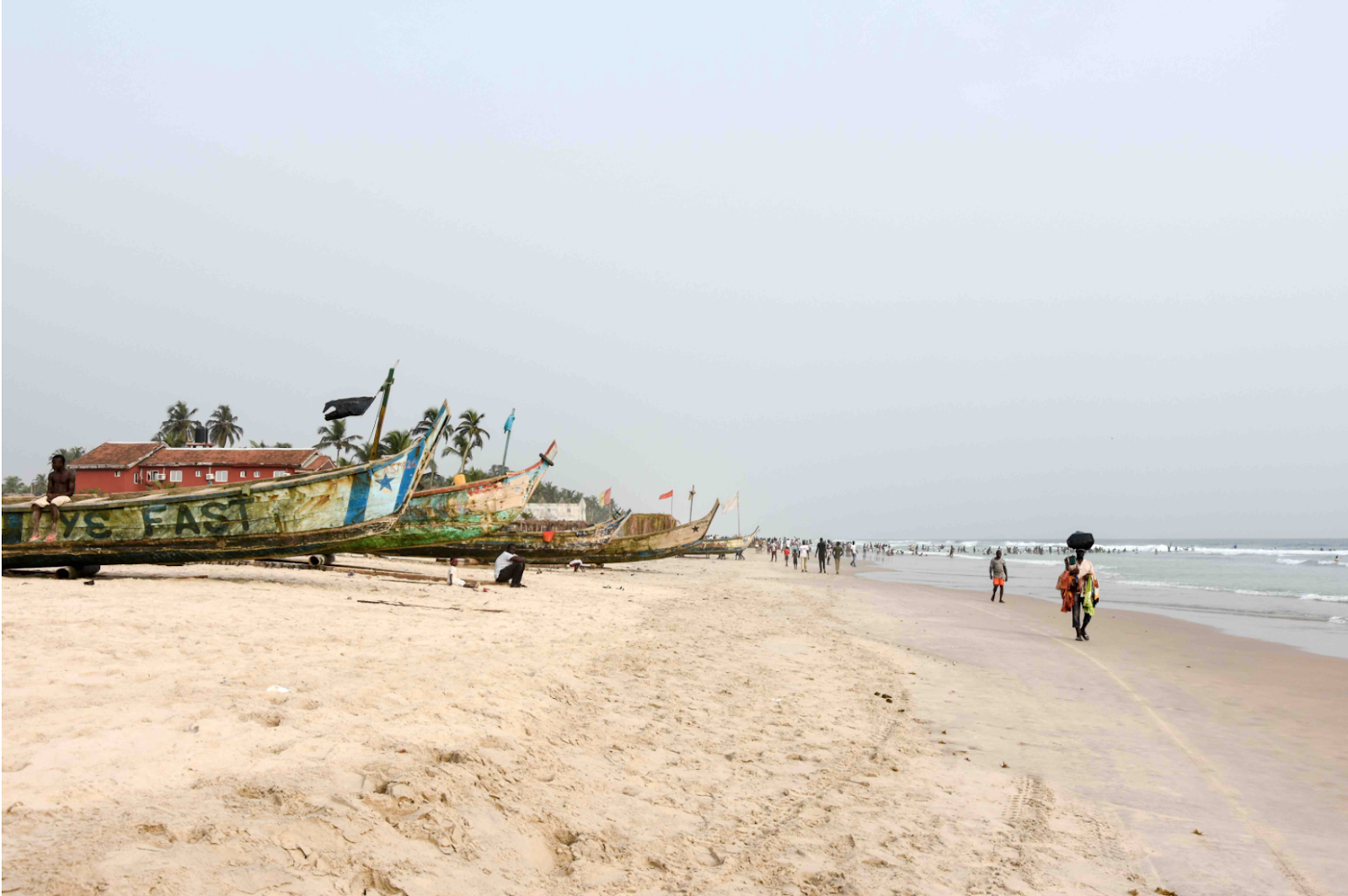 The next day, at breakfast, we were surprised by a fishing boat right in front of our hotel. We did not notice what was happening, as the boat appeared in the water, was pulled by some boys from the beach, they were repairing it, it seemed, and a half an hour later they threw themselves in the water in search of fish.

After a little more time investing in a bikini mark, we decided to rent two motorcycles with the hope of reaching the tip of the sand tongue that goes to Assinie and to the mouth of the lake of Parc National Des Iles Ehotilés. We had only an hour to go and return, and when we were about to arrive to the half an hour returning point, when we would have to go back, we met another group who told us that the tip would still be 20mins away … maybe next time.

After lunch we had to return to Abidjan because the flight to Lisbon was leaving that night. The Ivory Coast was a pleasant surprise and an excellent escape from this European winter! 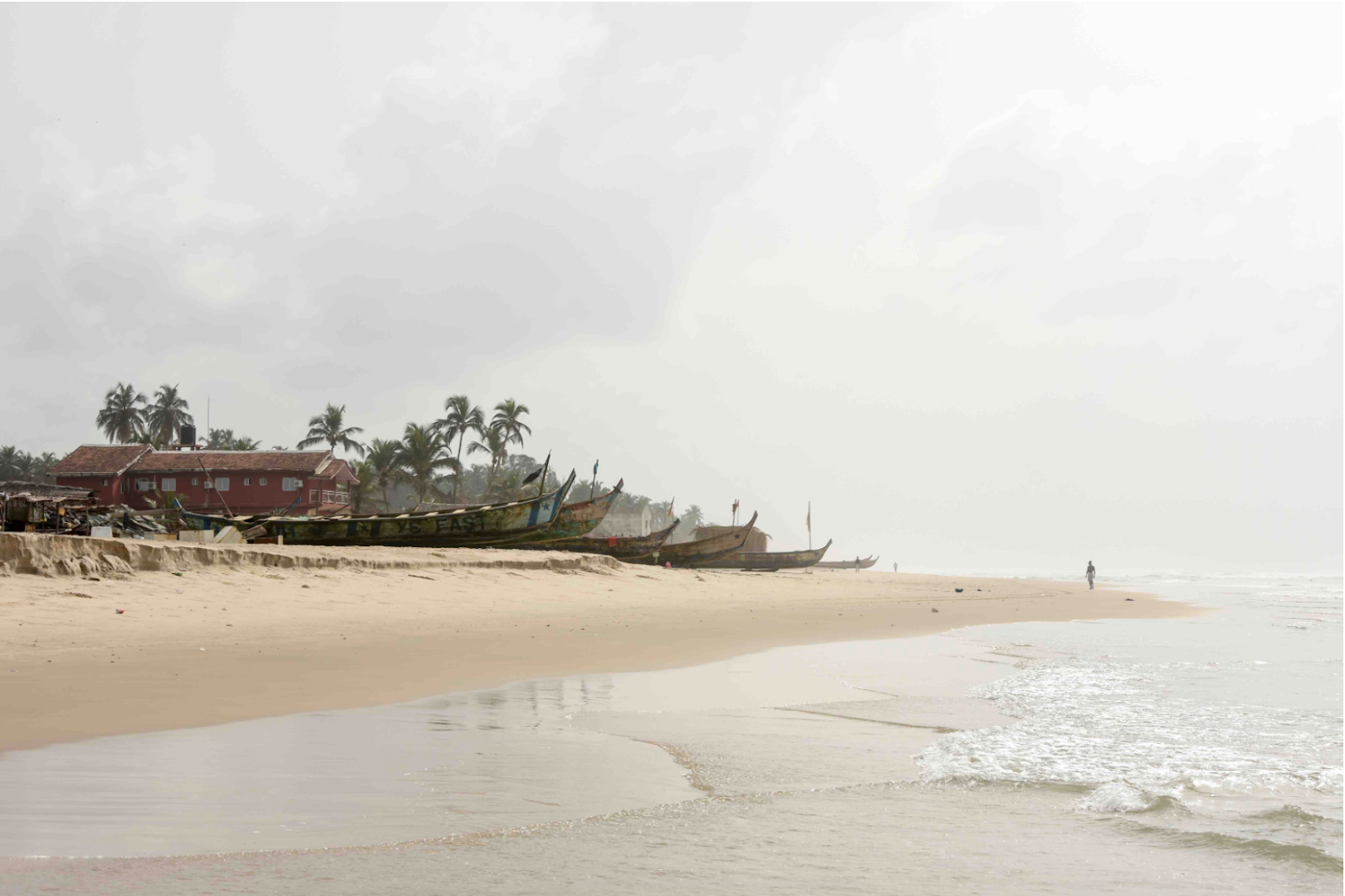 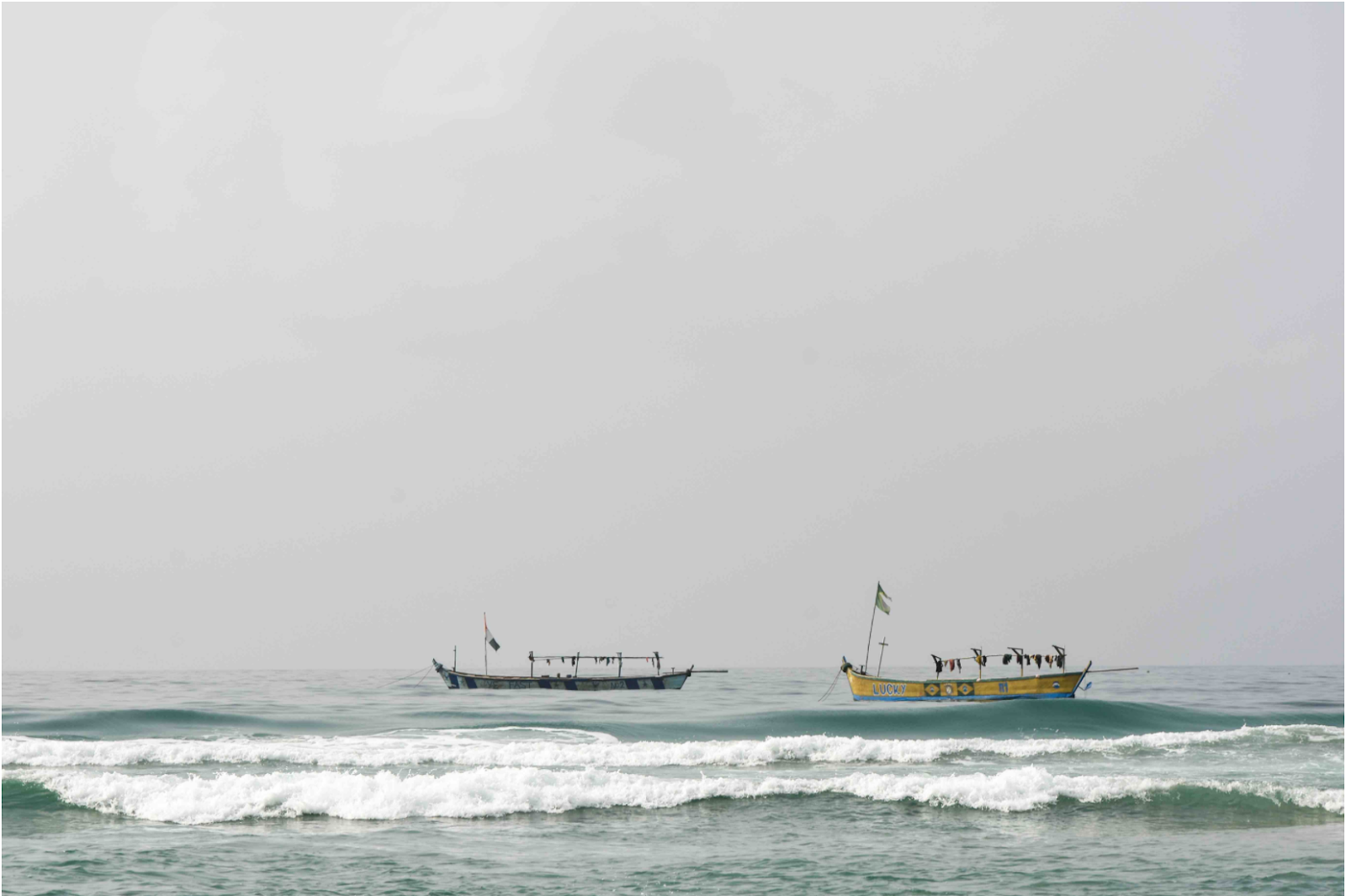 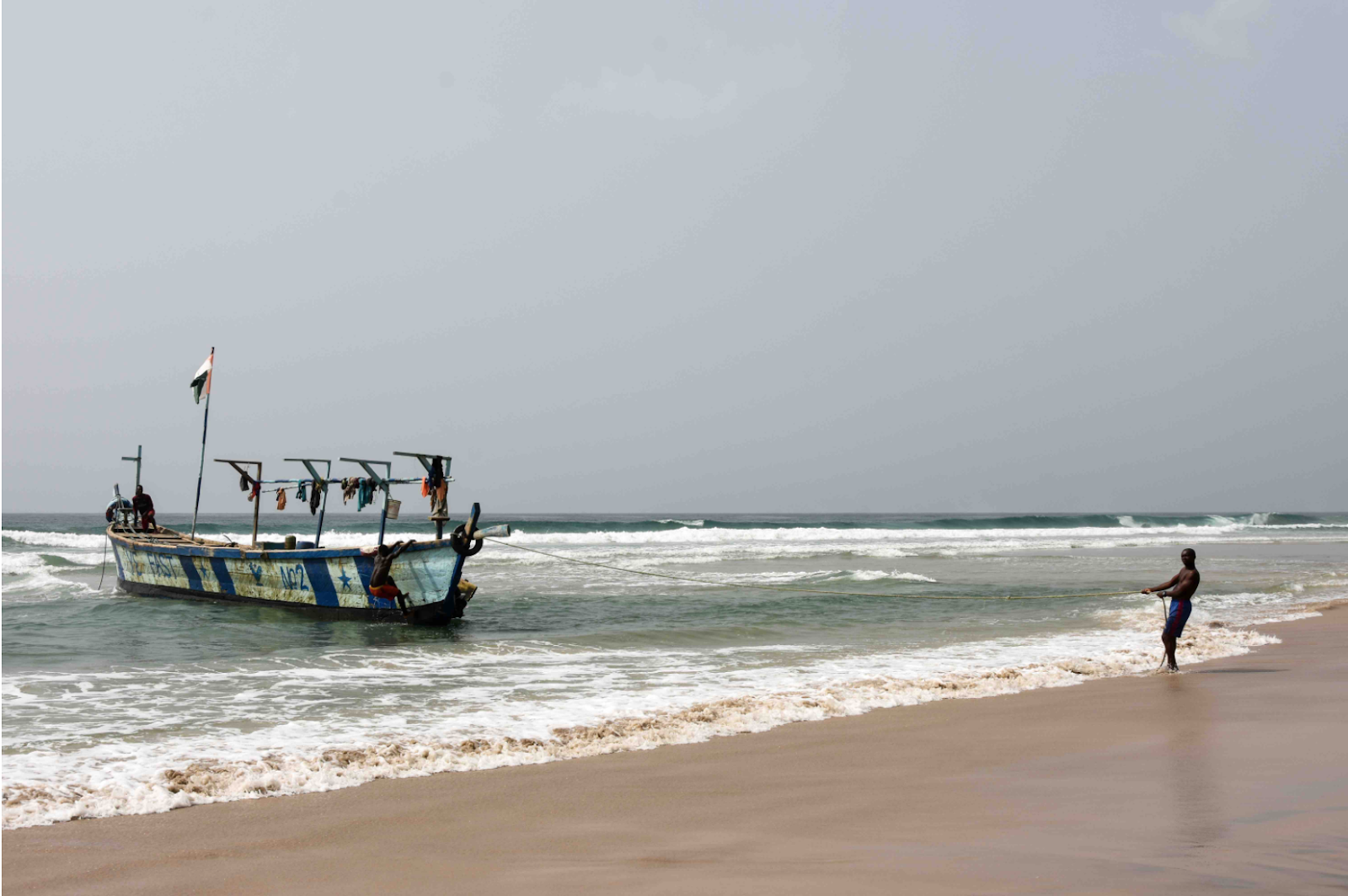 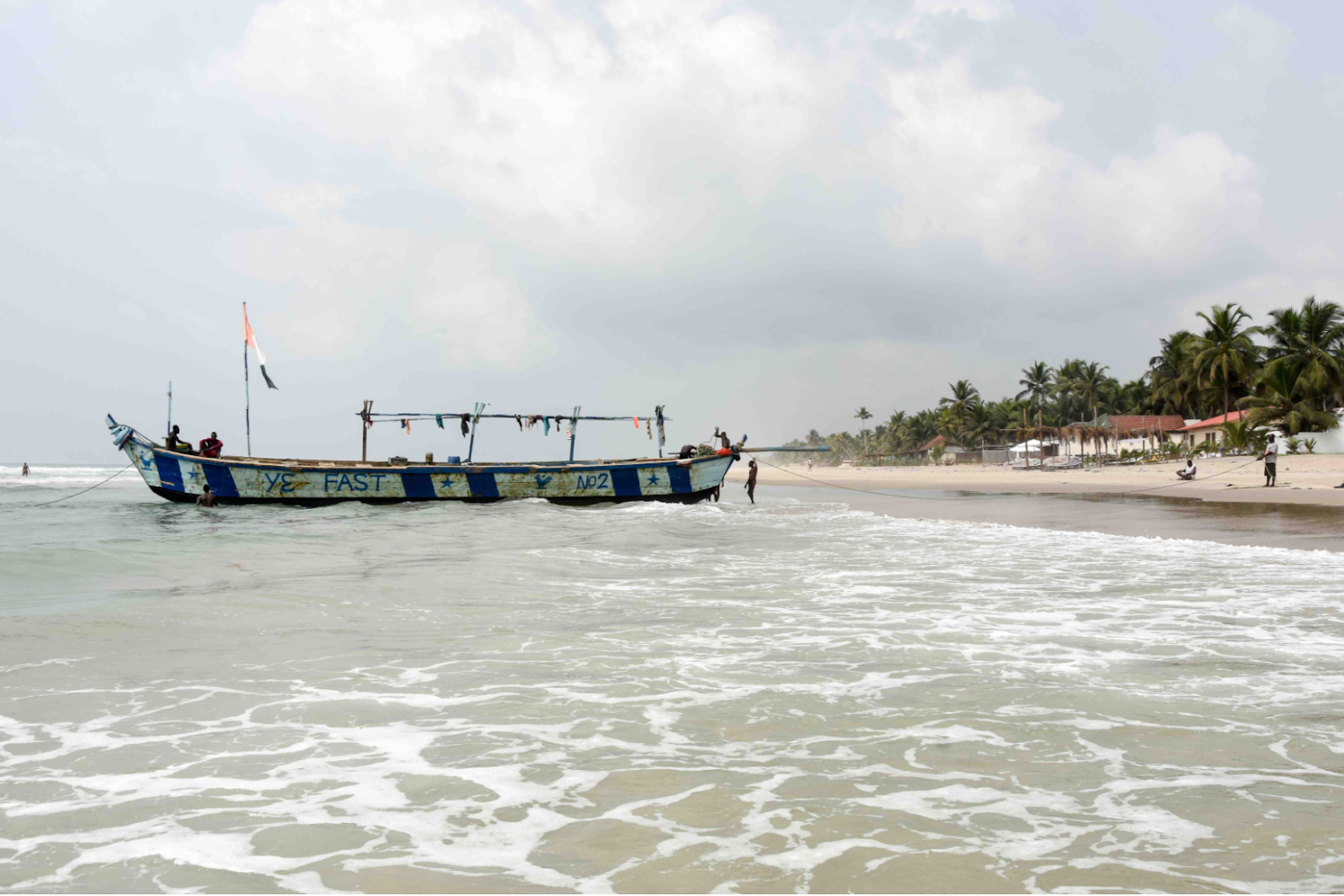 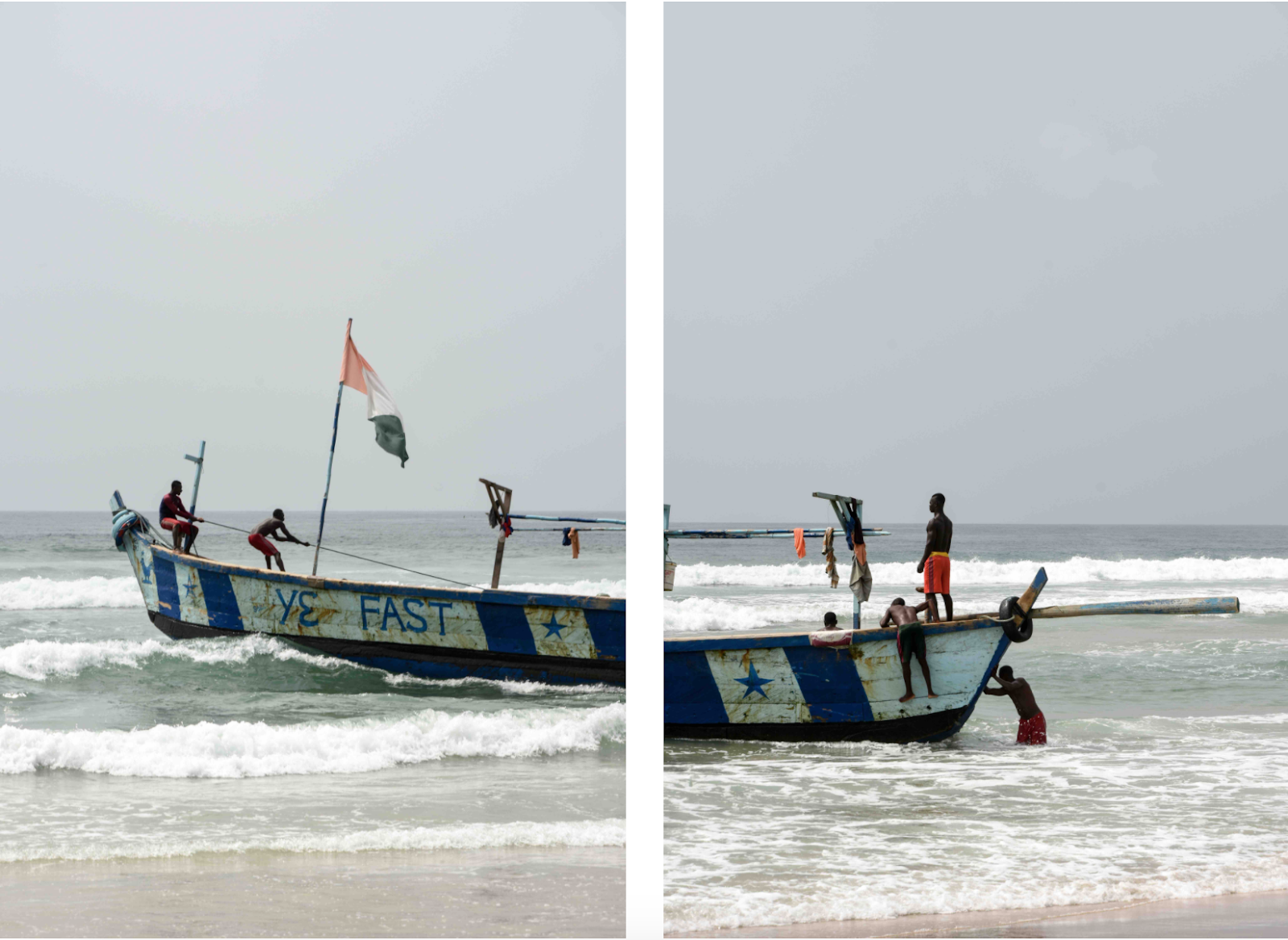 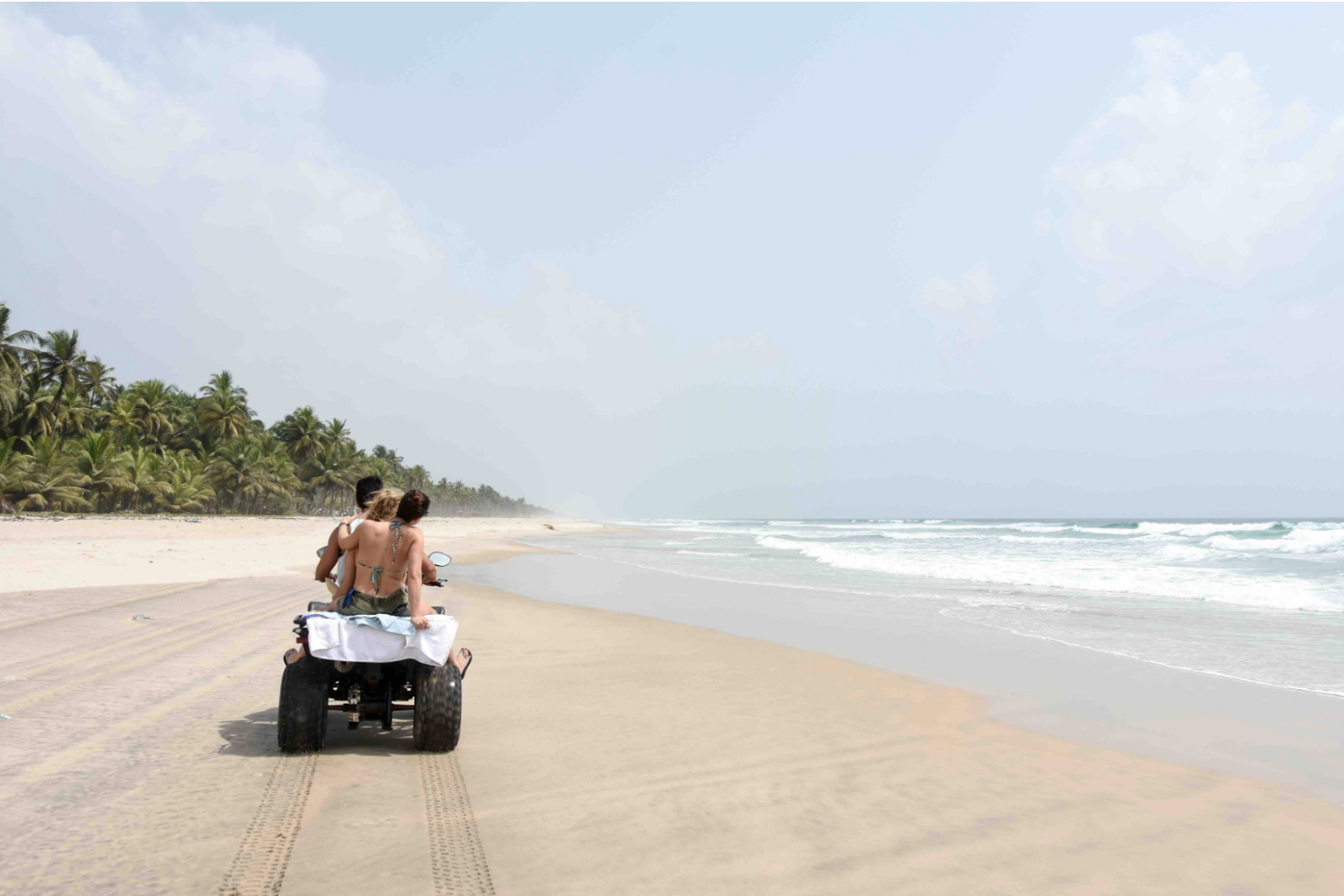 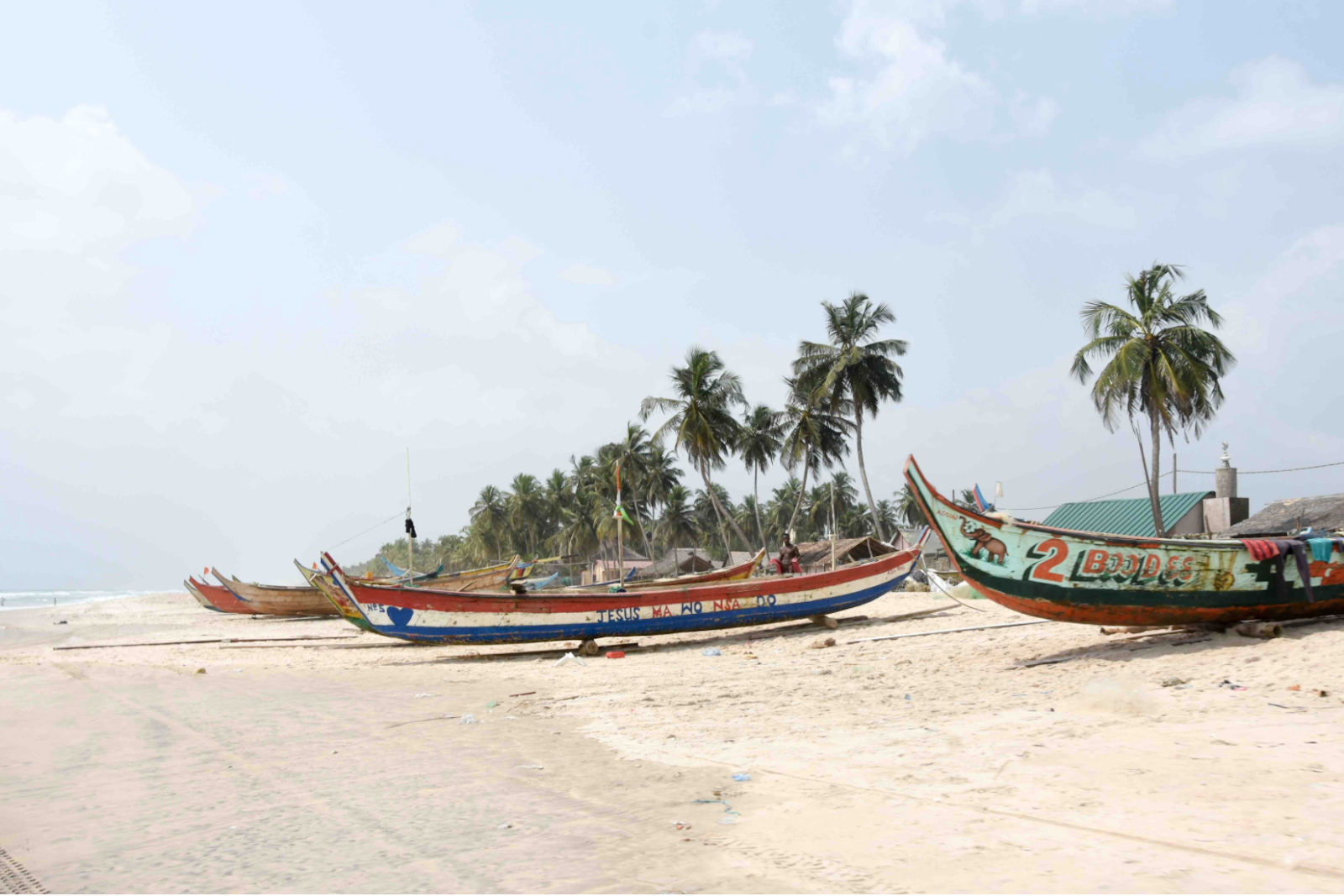 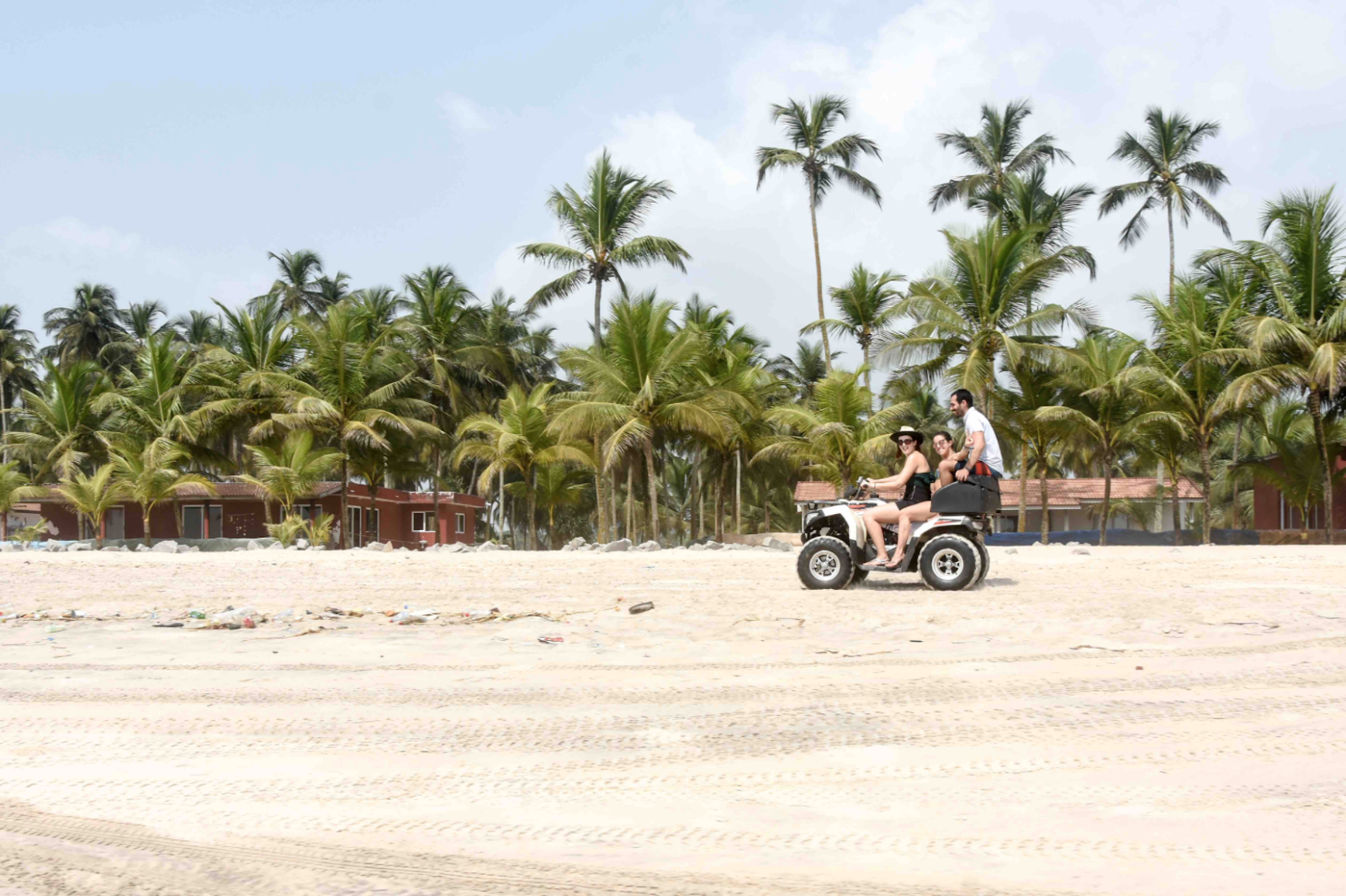 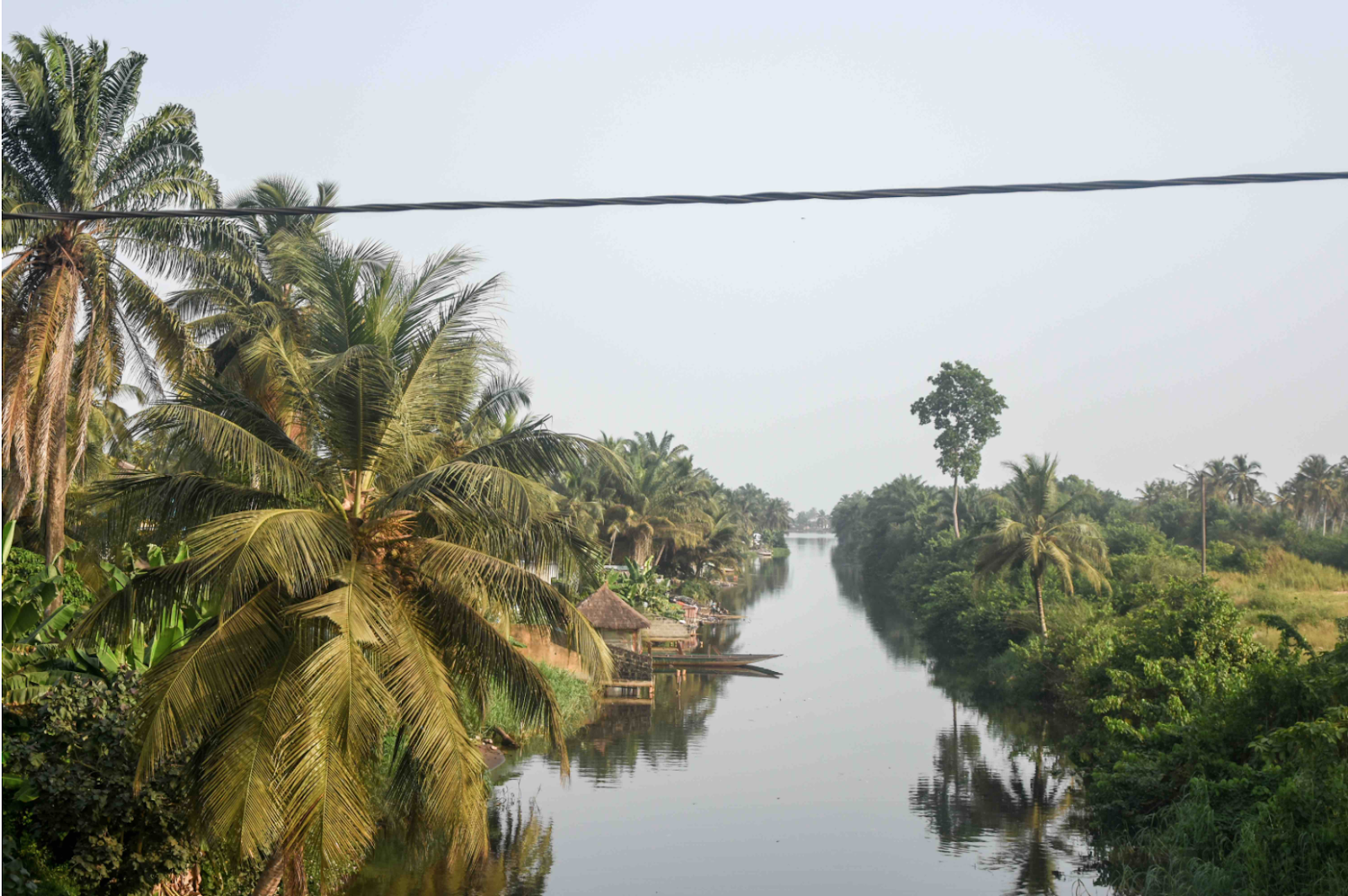 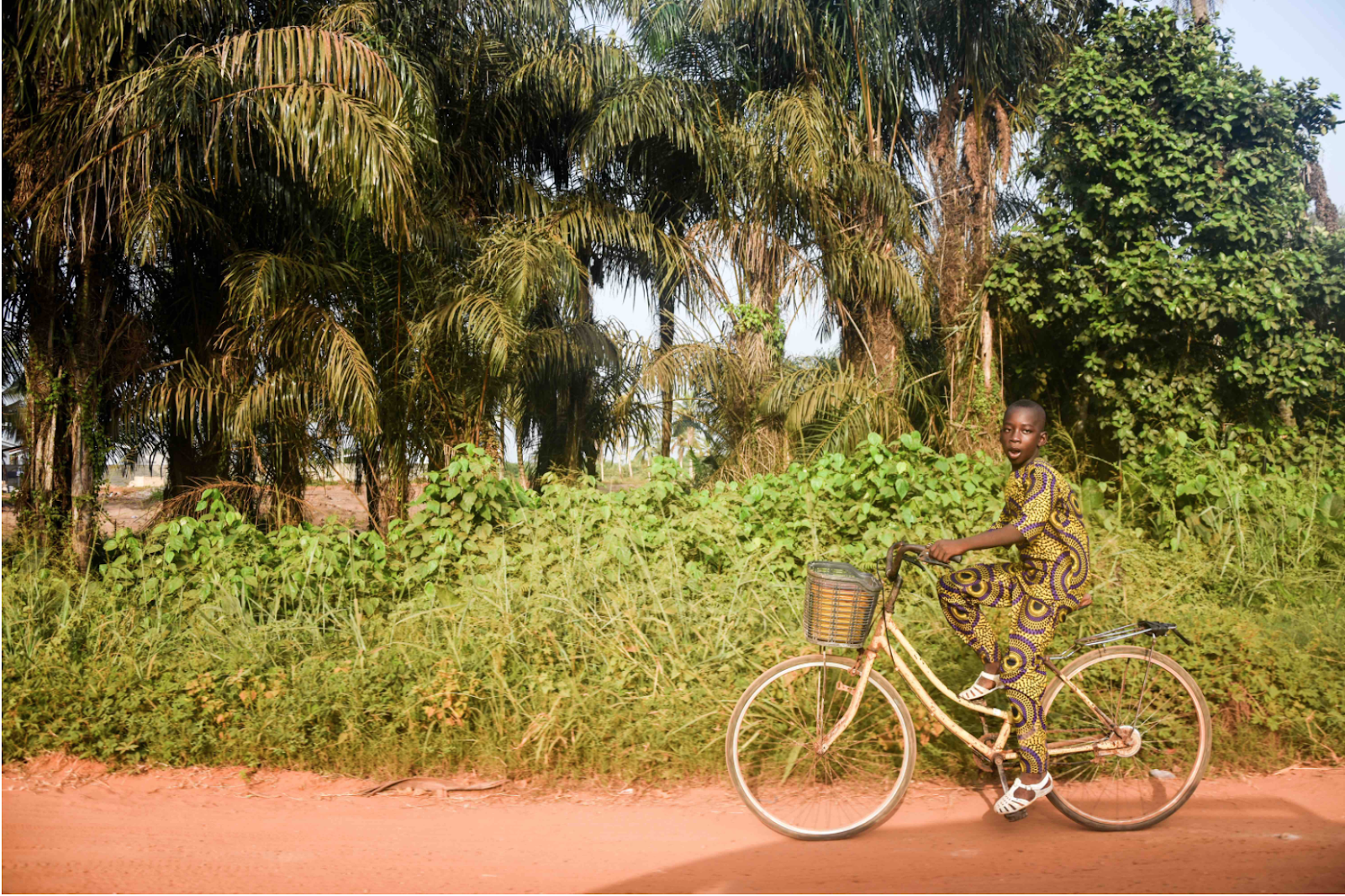 If you liked this post and want to read more about my trips to Ivory Coast or to neighboring Ghana, you can visit the following posts: 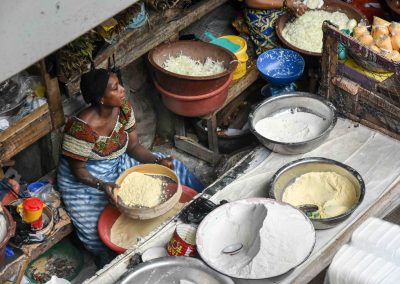 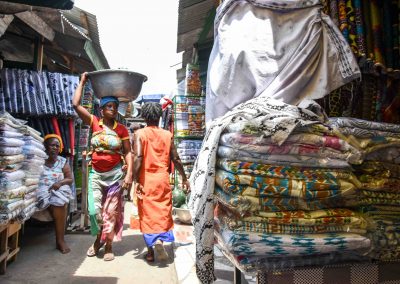 Exploring the markets of Accra 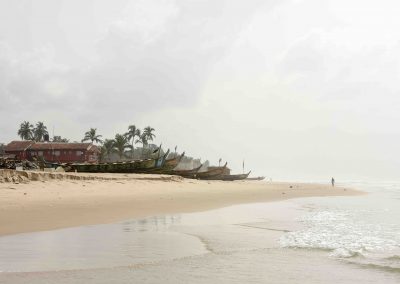 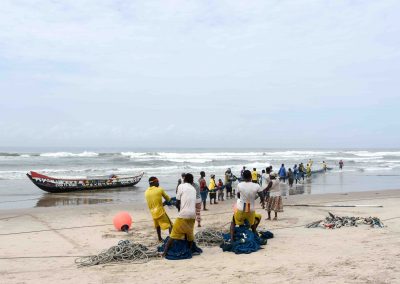