Many of you probably already know it, but the Oktoberfest is actually celebrated more in September than in October. It starts on the penultimate weekend of September and ends on the first of October – this year, therefore, from 22 September to 7 October.

This layover was not originally in my roster and even in Terceira I had heard the captain, working for TAP for 12 years now, and the purser, for 22 years, say they never got a layover in Munich during Oktoberfest. This way I got very surprised when I saw, in our flights exchange group, someone who had it and did not want it. More surprised I was when the girl accepted what I had in return – 4 days, always flying, with two nights in Porto and another in London.

As soon as we got to the hotel, already past midnight, we all agreed to meet up early the next morning, as the fest opens at 10 am and the captain already had the experience of arriving at noon and staying an hour waiting to enter.

We arrived at 10:30 m and it was peaceful, we could have arrived much later – indeed all day I did not think there could be queues to enter, including at 5:00pm, when we left, and when all those who work were in fact arriving. Be careful not to take large backpacks as they cannot enter. I had to leave my camera bag in the cloakrooms, which they install all over the place, for the value of 4€.

The Oktoberfest is in Theresienwiese, a gigantic area all cemented, which I cannot even  imagine how it should look like when there is no Oktoberfest, about 8 minutes walk from the central station. It’s really huge, much bigger than I had in my imaginary. It is also much more “fun park” than I imagined. There are a lot of people dressed up, men in Lederhosen and socks (and some with a “shins sock”, my favorite clothing piece) and women in Dirndls. With 6º to 12ºC it did that day, I admire them a lot!

Then each brewery has its pavilion, some bigger than others. After touring the main street, Löwenbräu convinced us with his lion roar at the door. Inside  lots of large tables, a bandstand in the middle for the band and many liters of beer in the strong arms of the maids – forget the Portuguese mini, here is a liter at the time. They also serve food and there are always people passing with the most expensive brezels I have ever seen – 5€ each! The tables are for 10 people, so our group of 6 had to share a table sooner or later, because despite being giant, everything fills up. My favorite pavilion was, however, that of Hacker-Pschorr, with a beautiful ceiling, like the sky, and images of the most emblematic of Munich all around. Each brewery brings in the middle of the day its wagon pulled by six beautiful horses, who stand in front of each pavilion to the delight of all!

Admission to the Theresienwiese is free and every liter of beer costs approximately € 11,5 depending on the brewery. There are more or less affordable food options but overall it’s pricey – I, for example, paid € 13 for two sausages and a plate of fries. The part of the amusement park seemed to me very expensive. I rode in only two attractions, the Ferris wheel (€5.5) to get an overview of the area and the city in the background, and a diabolical roller coaster with five loops (€8.5) from where I left rather ill-disposed.

Overall I enjoyed the experience, but I think it should be even more fun later, from 5pm on, when it gets completely full with germans. 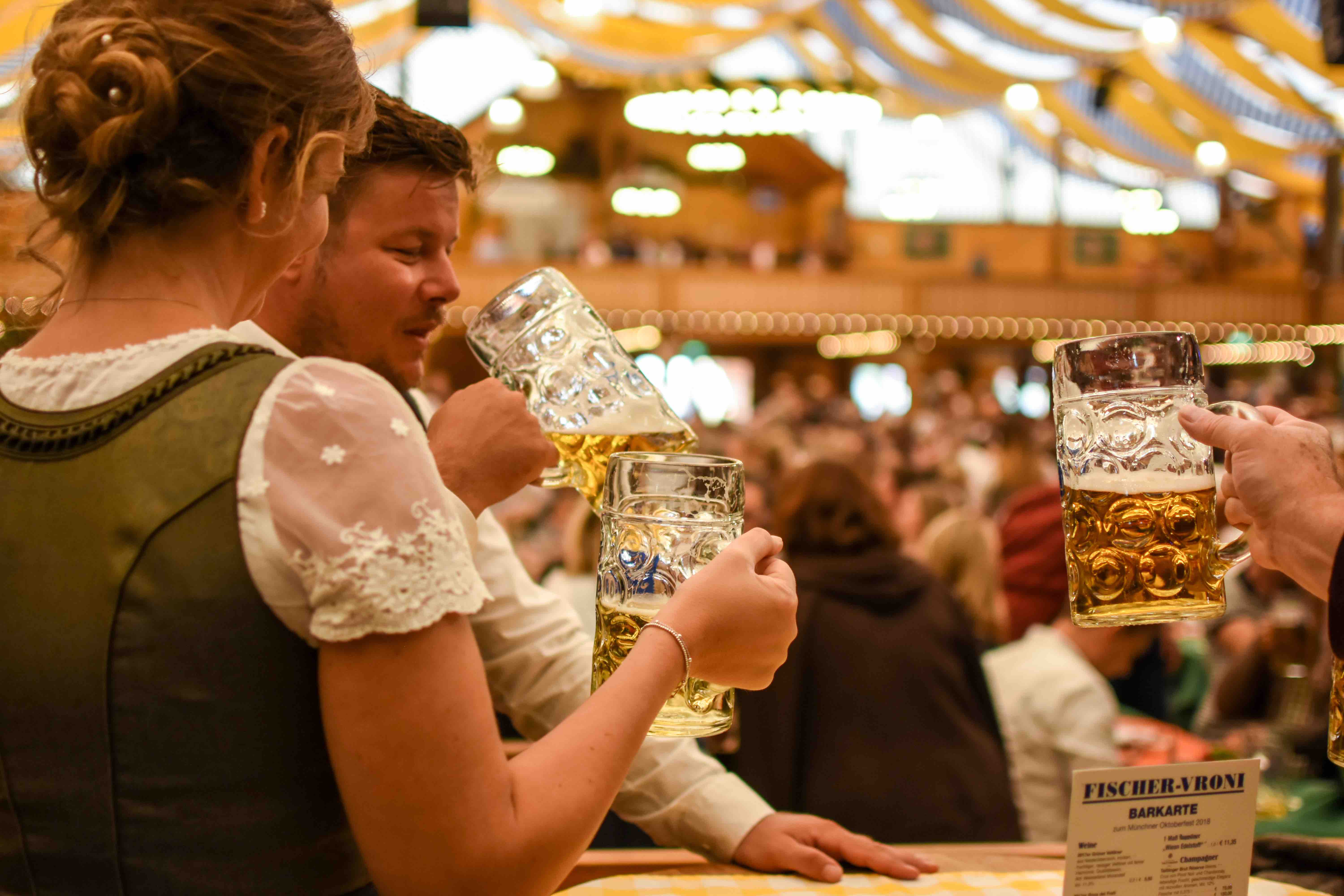