One of the things we were sure when we decided to go to Mozambique was that we would go to Kruger National Park in neighboring South Africa. We knew we wanted to stay in the park for more than one day, sleep inside the park and not in the hotels near the gates and we didn’t want to be selfdriving because we thought that the one who had to drive could not pay so much attention to animals. We contacted a number of agencies from Maputo and Nelson Cruz’s Africa Kruger Tours came up with the most interesting offer: three days of safari, one night in Olifants, one night in Mopani, restcamps in the north of the park where most people do not reach, where vegetation is more shallow and so easier to spot the animals. The experience with Nelson was absolutely fantastic, he sees everything from ants and snails crossing the road to the lion across the river or the leopard walking in the shade!

We left Maputo at 5 am and about two hours later we arrived at the park, after crossing the border and withdrawing some money to have inside the park, although it is not necessary as it is possible to pay by card everywhere. We soon started to see impalas, then elephants, many elephants, giraffes, zebras and wildebeest ( who always walk near the zebras because they are not so aware of the danger so follow them and imitate them if there is a predator). Many birds, our favorite the swainson’s spurfowl, also known as “Crazy-Maries”, as they cross the road running like crazy, right in front of the cars, but also the helmeted guineafowl or birds that pick up giraffes and look like crazy looking penguins. Hippos, “poop beetles” and new species such as waterbuck. One of the big goals when doing a safari is to see the big 5 (elephant, buffalo, lion, rhino and leopard) and we had no idea we were going to see them all on our first day, four rhinos including a baby, leopards which are the hardest, we saw two, lion just saw the silhouette of one in the distance and already arriving at the rest camp we finally saw buffalos! We had breakfast at Lower Sabie rest camp, the best we visited – the restaurant is wonderful,  the food is great, the view better, and it was the only one we went to that had wifi (unfortunately as this was our first stop we thought it was going to be like this everywhere and then we were disappointed. Remembering my sister’s famous phrase “Where have you ever seen a safari without wifi?”). We also saw kudus, the twisted-rod animal that is the park’s logo, reptiles and vultures, Pumbaa boars, Zazu birds (see the Lion King if you don’t know what I’m talking about) and hyenas. Amazing landscapes, arid, different vegetation, giant baobabs. Already arriving at Olifants there was a pack of wild dogs, super hard to see as there are only 120 in the entire park! This first day was marked by a heat of over 35ºC and when we arrived at the hotel, after sunset, we still took a dip in the pool 😉

Kruger’s second day also began at five in the morning to enjoy the cooler hours of the day when the animals are most active. It rained all night and part of the day, so the landscape changed a lot – on the dry rivers of the previous day a trickle of water began to flow and the water attracts life. But the rain reduces visibility… On this day we crossed the Tropic of Capricorn and saw new animals: little monkeys, colorful storks, eagles and marabous among so many other birds, a super cute baby porcupine, crocodiles and the ultimate exponent of the day: a lion pulling out a half-eaten buffalo from the river and dragging it upstream behind some bushes to eat peacefully, while another lion approached and waited its turn to eat! Going on safari is amazing but it also means a lot of time searching and looking, sometimes seeing nothing for some time, always sitting in the car because there are few places where we can step out of the vehicle. Although it wasn’t a hot day, when we returned to Mopani rest camp where we had breakfast that day and were going to sleep, my mother still took a dip in the pool.

On the third day of Kruger we had to go all the way from Mopani to Crocodile Bridge (about 250km in a speed ok 50km/h tops) and back to Maputo. But with Nelson we don’t waste a minute of safari, so even though we left at 5am, we only left Kruger some minutes before 6:30 pm, when the gates close. On this day we went back to visit almost all of the rest camps heading south – our favorite souvenir store is the one in Satara, to eat we prefer Lower Sabie, where we had lunch, finally with internet, and had a wonderful farewell show: by the river, right in front of us, an elephant, hippos and buffalos in the water and baboons jumping over the electrified fence. But the morning began with the same family of hyenas we ended the day before. Hyenas are a matriarchal species, females are bigger and bossy, and males wake the puppies, bathe them, and so on while mothers sleep. From new animals we only saw ostriches, baboons and realized why the little monkeys we had seen the day before are known as blue monkeys (see the pictures!). The farther south we got closer to the beautiful storm, the rain was falling in the distance and just above us, the sun was low and zebras in the horizon. On the opposite side a double rainbow! Wonderful! 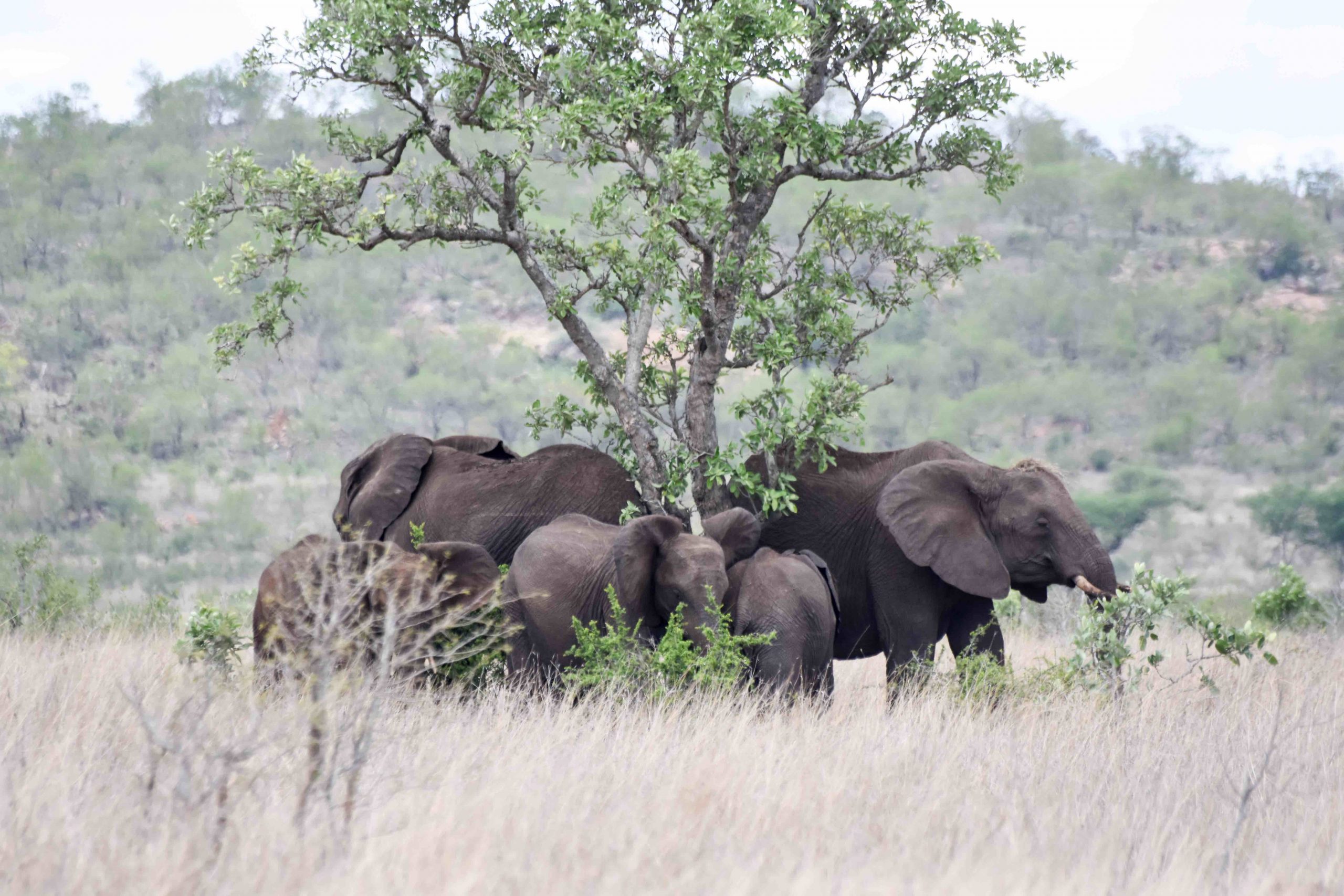 Now we have to go back to see some cheetahs! Thanks to those who reached the end of the longest post ever! And go to Kruger, it’s the best thing ever! And go with Nelson, it’s totally worth the price, as you see we saw (almost) everything and if it wasn’t him, we wouldn’t have even seen half!